Hallux valgus is the most common foot deformity in adults, particularly in the female population.[1] Inheritance plays a significant role in the etiology of hallux valgus.[2] Patients’ history reveal that this deformity is also observed in other family members. However, the increase of hallux valgus deformity due to footwear should not be ignored. Particularly restrictive shoes produced from hard material lead to hypertrophy and inflammation of bursa on medial protrusion at the distal end of first metatarsal as a consequence of repeated load transfer from the medial of first metatarsal to the shoe.[2-5] Menz et al.[6] reported a significant relationship between the development of hallux valgus and the wearing of restrictive shoes.

For the patients, the cause of seeking medical help is pain rather than esthetic concerns and although improving the esthetic appearance of the foot is important, the most significant indication for surgical treatment is pain.[7] The pain can sometimes make it difficult for a patient to wear shoes, and these patients have problems even in business, social life, and sports activities. Being able to choose footwear freely is an important indicator that determines the success of surgery both for the patient and surgeon. Our hypothesis was that distal oblique metatarsal osteotomy is a safe method that improves patient comfort and satisfaction in the postoperative period.[8] Therefore, in this study, we aimed to evaluate the radiological and functional outcomes of hallux valgus patients treated with distal oblique metatarsal osteotomy technique.

This study was conducted at Gazi University Faculty of Medicine and it included 26 feet of 22 patients (4 males, 18 females; mean age 46.2±18 years; range, 16 to 70 years) who were diagnosed as hallux valgus between March 2013 and April 2016 and who underwent distal oblique metatarsal osteotomy. The data were collected prospectively for every patient preoperatively but evaluated retrospectively. The patients with previous hallux valgus surgery for the affected foot, inflammatory disease, peripheral vascular disease, or peripheral neuropathy were excluded. Surgical treatment was recommended for patients who were diagnosed with hallux valgus and who had difficulty in footwear, sport activities, and working after conservative treatment methods. There was also no evidence of metatarsophalangeal (MTP) joint degeneration for the included patients. All patients were evaluated pre- and postoperatively clinically and radiologically. Minimum duration of follow-up was 24 months. American Orthopedic Foot and Ankle Society/Hallux Metatarsophalangeal- Interphalangeal Scale (AOFAS/HMIS) was used for clinical evaluation. This scale consists of three parts as pain (40 points), function (45 points), and alignment (5 points). Activity limitations, footwear requirements, and MTP joint motion, which are components of the function part, were evaluated separately. Visual analog scale (VAS) was also used to assess pain and satisfaction. The study protocol was approved by the Gazi University Faculty of Medicine Ethics Committee. A written informed consent was obtained from each patient. The study was conducted in accordance with the principles of the Declaration of Helsinki.

Weight-bearing anteroposterior (AP) and lateral radiographs were obtained pre- and postoperatively for radiological evaluation. The hallux valgus angle (HVA), intermetatarsal angle (IMA), distal metatarsal articular angle (DMAA), sesamoid position, first metatarsal length, and forefoot bone and soft tissue width were measured preoperatively and after last follow-up. The method described by Zettl et al.[9] was used for sesamoid position evaluation. First metatarsal length was distance from the distal end of the metatarsal head to the bisection of metatarsal base. For the measurement of forefoot bone width at weight-bearing AP radiograph, the distance remaining between the distal outer margins of the first metatarsal and the fifth metatarsal was measured. The distance between soft tissue shadows was measured using the same method for the forefoot soft tissue width (Figure 1). 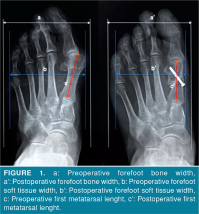 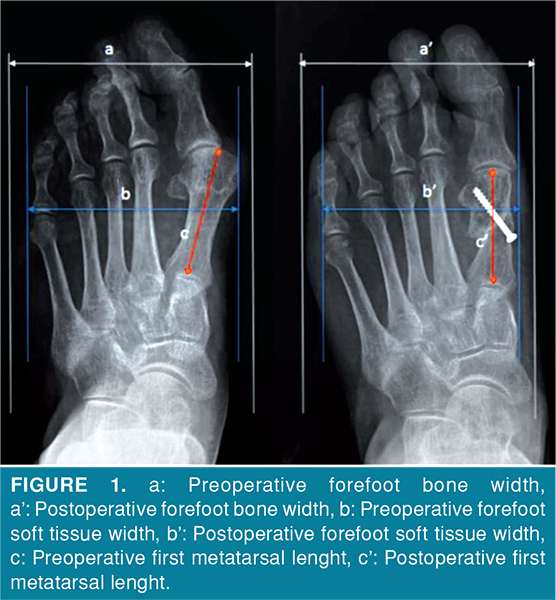 The patients were placed in the supine position on the operating table. Under an ankle after pneumatic tourniquet was applied, dorsomedial approach was used over the one third of distal metatarsal. The skin and subcutaneous tissue were incised by straight incision and joint capsule was opened in the form of U-shape (Figure 2a). After the bunion excision, the metatarsal shaft was osteotomized from metatarsal shaft-neck conjunction area at an angle of 30-45° in a distal medial to proximal lateral direction with respect to the first metatarsal length, deformity, and plantar fascia tension (Figure 2b). Sliding on the surface of the osteotomy was achieved not by active manipulation, but by bringing the thumb to the ideal position (Figure 2c). The sliding of the osteotomy site with this method occurred in different amounts according to the soft tissue tension that was different in each patient. Then, the first phalanx remained unsupported in the desired position and no soft tissue tension (particularly plantar fascia) was observed in this position to cause the deformity again. In addition, no additional soft tissue (adductor muscle, lateral capsule, plantar fascia, etc.) release was performed. The distal fragment containing the first metatarsal head was shifted to the plantar side in the sagittal plane and the cascade was formed in the osteotomy area. In the sagittal plane, care was taken to align the first and second metatarsal heads in the same level. A 4 mm cannulated compression screw was used for fixation of distal fragment after the appropriate positioning (Figure 2d). 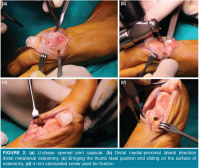 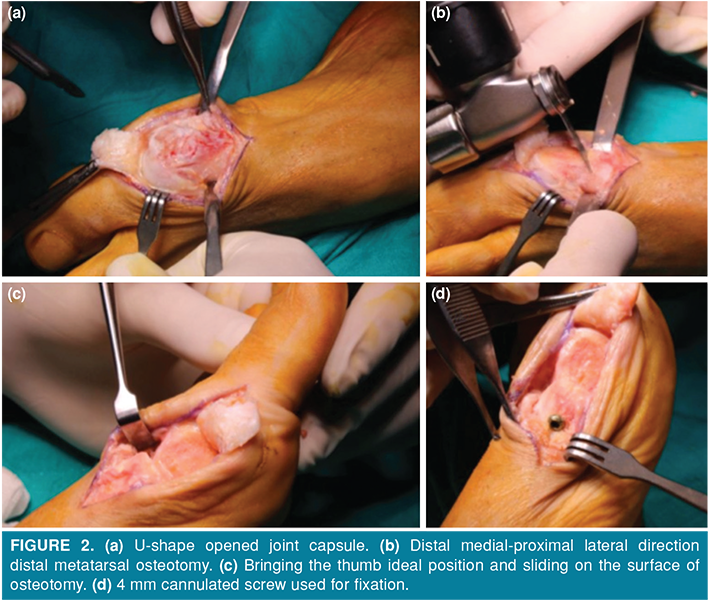 The statistical analysis of the data was performed by using the IBM SPSS version 22.0 for Windows software (IBM Corp., Armonk, NY, USA) . Relevance of variables to normal distribution was assessed with visual (histogram and probability graphs) and analytical methods. In the descriptive statistics section, categorical variables were presented as number, percentage, and continuous variables were presented as mean ± standard deviation for normally distributed data and median (minimum-maximum) for data not normally distributed. The comparisons between the dependent groups were performed with the Wilcoxon test using the median and minimum- maximum values, and the statistical significance level was accepted as p<0.05.

In the radiological evaluation, the HVA, IMA, DMAA, and first metatarsal length decreased significantly (p=0.001) (Table I). Forefoot bone and soft tissue width also decreased postoperatively (p=0.001) (Table I). According to Zettl method,[9] eight of 26 feet were evaluated as stage 3, 13 as stage 2, four as stage 1, and one as stage 0. After the last follow-up, there was no stage 3 sesamoid position, whereas stage 2 was in 1 foot, stage 1 in 14 feet and stage 0 in 11 feet (Figure 3). 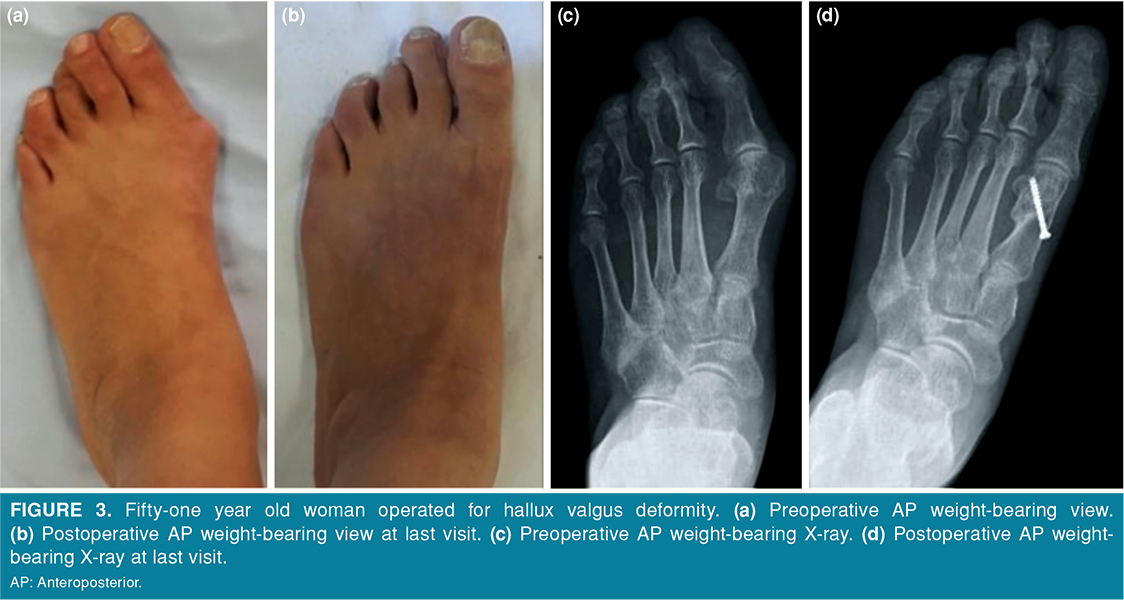 Total AOFAS/HMIS score was significantly higher than the preoperative period (p=0.001). Furthermore, a significant difference was also obtained between pre- and postoperative pain, function, and alignment sections of the AOFAS/ HMIS. In the footwear section of the AOFAS/HMIS, the median preoperative score of 5 (range, 0-5) increased to 10 (range, 5-10) in the postoperative period (p=0.001) (Table II).

Postoperatively, superficial infection was seen in two patients and it healed with antibiotic treatment. In one patient, screw migration was observed in the third month follow-up and the screw was removed. Two patients had metatarsalgia for the second and third ray at the last follow-up.

The aim of surgical treatment for hallux valgus is to correct the deformity and decrease the symptoms to enable the patients to continue their sports activities, and social and professional life. Several methods were described for correcting the hallux valgus deformity in the literature and gratifying radiological results were obtained; however, complication rates after surgery and patient’s dissatisfaction could be higher than expected.[10] Although the expectation of patients after surgical treatment is painless footwear, only 60% of this expectation can be met.[11] The main finding of this study is that forefoot narrowing achieved after oblique osteotomy is significant for the patient’s satisfaction and painless footwear.

Unlike other studies in the literature,[17-19] anterior forefoot width was also a radiological measurement method in the present study. As Perera et al.[3] stated in their study about pathogenesis of hallux valgus deformity, repeated load transfer from the medial of the first metatarsal to the shoe will accelerate the formation and recurrence of hallux valgus deformity. In present study, significant decrease in forefoot bone and soft tissue widths was obtained. We therefore suggest that measuring the forefoot width is as vital as measuring the HVA, IMA, and DMAA.

In patients with hallux valgus deformity, the reason for the increased deformity during balanced standing is the pronation effect of weight-bearing loads and the tightening and shortening of the plantar aponeurosis. This causes patients to have resistance to dorsiflexion of the thumb during heel take off due to tension and shortness in the plantar fascia.[3] Sanders et al.[23] reported the effects of flexion moment acting on the MTP joint in their biomechanical study. According to this study, in patients with hallux valgus deformity, flexion moment acting on MTP joint increased the deformity during balanced standing while pushing the great toe on the ground. Fenton and McGlamry[24] also indicated soft tissue balancing would reduce the force acting on the first metatarsal and hallux. We believe that the decrease in VAS pain score and increase in AOFAS/HMIS footwear section obtained in present study may result from soft tissue balancing effect of distal oblique metatarsal osteotomy.

The weaknesses of this study are its retrospective design and limited sample size. However, despite these limitations, the results of this study provided preliminary information for future prospective, randomized clinical trials with larger samples regarding distal oblique metatarsal osteotomy. In addition, to the best of our knowledge, this is the first study defining the forefoot width for hallux valgus surgery.

In conclusion, pain after hallux valgus surgery and the limitation in the choice of footwear are due to the inability to reduce the postoperative forefoot width, and achieve sesamoid reduction and plantar fascia relaxation. The most significant advantages of the current technique were the forefoot width shortening achieved compared to other methods and the prevention of recurrent painful bunion formation.