Orthopedic treatment, complications, and cost analysis of 67 soldiers injured in a three-month period

Objectives: This study aims to analyze the musculoskeletal injury types, injury mechanisms, treatment modalities, complications, and costs of 67 consecutive soldiers wounded in the battlefield in Syria civil war over a period of three months.

Results: Twenty-three patients were injured due to handmade explosives, 21 patients due to gunshots, 16 patients due to landmines, five patients due to rockets, and two patients due to grenades. A total of 35.8% of the patients (n=24) had concomitant trauma. The mean hospitalization period was 10.2 days (range, 1-45 days). A total of 88 treatments were performed on these patients. Thirty-six of these treatments were external fixators, 21 were amputations, 12 were open reduction internal fixations, seven were closed reduction internal fixations, five were intramedullary nailings, three were cannulated screws, three were fasciotomies, and one was an arthrodesis. The treatment costs ranged from 1,577 to 296,286 Turkish Liras. Complications were observed in 17 patients and 11 of them developed infections, three of them had compartment syndrome, and three died during the hospitalization period.

Conclusion: The increase in warfare technology is correlated with the severity of military injuries in the battlefields. These injuries still lead to high traumatic amputation rates, high-risk complications, and high costs.

Wars are still ongoing across the world even after the Second World War. Countries are obliged to address the significant costs incurred as a result of injuries caused to soldiers and civilians in wars. Extremity injuries are frequently encountered in trauma patients with access to war surgeons. This was the case in many countries, such as Iran, Afghanistan, and Syria.[1-4] Wounds caused by high-energy army weapons are complex and contaminated.[5]

A civil war arose in Syria in 2011 and is still ongoing. Due to the civil war in the country, a large number of patients has been admitted to hospitals in the border cities of Turkey. A significant amount of patients who has been injured by war are taken to Kilis district hospitals across the border with Turkey. The level II trauma center at Kilis State Hospital is 8.4 km away from the Syrian border. The number of soldiers and civilian patients injured in the war in Syria and treated in this center reached around 2000 in the previous year. Although comparatively more civilians have been injured in this war, higher morbidity and mortality rates have been observed among injured soldiers who have been brought from the battlefield.

In this study, we aimed to analyze the musculoskeletal injury types, injury mechanisms, treatment modalities, complications, and costs of 67 consecutive soldiers wounded in the battlefield in Syria civil war over a period of three months.

This retrospective study was conducted at Kilis State Hospital between January 2018 and March 2018 involving 67 consecutive male patients (median age 28.5 years; range, 15 to 46 years) treated for extremity injuries. Data were collected from the patients' and hospital's medical records including demographics, injury mechanisms, injury locations and sides, time from field to hospital, mangled extremity severity score (MESS), injury severity score (ISS), Gustilo-Anderson classification, hospitalization periods, costs, complications, and the presence of accompanying traumas. The study protocol was approved by the University of Kyrenia Ethics Committee (2019/ 01-001). A written informed consent was obtained from each patient. The study was conducted in accordance with the principles of the Declaration of Helsinki.

The demographic characteristics of the subgroups with lower or upper extremity injuries, with complications or infection, and with an ISS value of 14 and below or above 14 were compared statistically.

The statistical analysis was carried out using IBM SPSS version 22.0 software (IBM Corp., Armonk, NY, USA). Mean, standard deviation, lowest and highest median, frequency, and ratio values were used as the descriptive statistics of the data. The distribution of variables was measured using the Kolmogorov- Smirnov test. The Mann-Whitney U test was used for the analysis of quantitative independent data. The chi-square test was used for the analysis of qualitative independent data, and the Fischer’s exact test was used when the chi-square test conditions were not met. A p value <0.05 was considered statistically significant.

Figure 1. (a) Preoperative X-ray of a patient with fractures of both tibias, who was injured due to hand made explosive. (b) Postoperative X-ray of patient; external fixation and below knee amputation were performed simultaneously.
× 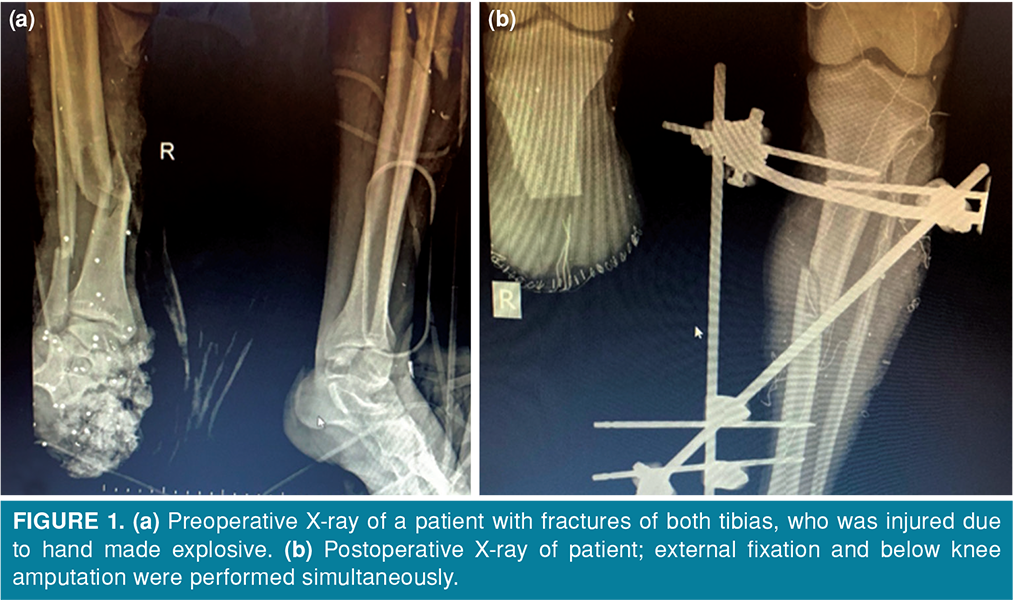 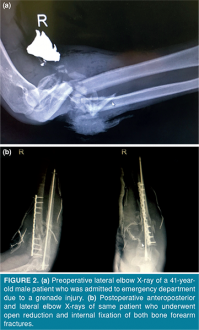 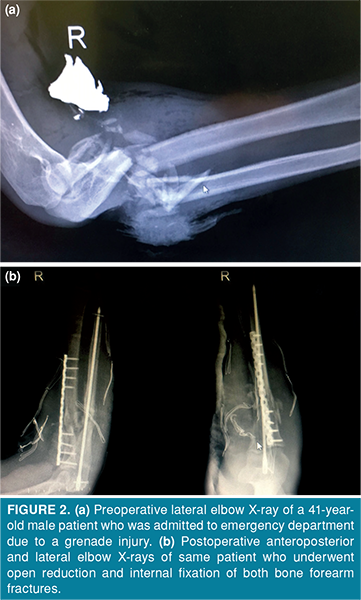 Table 4. Comparison of demographic characteristics of subgroups with injuries in lower or upper extremities
×

Table 5. Comparison of demographic characteristics of subgroups with complications
×

The most important finding of our study is that the treatment of soldiers wounded in the battlefield involves high rates of complications and costs. Many articles have been published in Turkey about the civil war in Syria.[4,6,7] However, all of these studies evaluated civilians or refugees affected by the civil war in Syria. The fact that our study only included soldiers wounded on the battlefield in a short period of three months reveals the difference and importance.

In their study, Karakus et al.[7] evaluated the hospital admissions and costs of those injured in the Syrian war where most of the admissions were in orthopedics. The most frequent presenting complaint was gunshot injury. In our study, the rates were close to each other; the most common injury was due to handmade explosive, and the second most common injury was due to gunshot. The sum of these two accounted for 2/3 of all the injuries.

The medical costs incurred by patients transferred from the Syrian border to the hospitals reportedly exceeded US$150 million by April 2012.[8] In the cost analysis by Karakus et al.,[7] the mean cost was 3,723 TL per case (range, 15-69,556 TL). In our study, the mean cost was 9,138 TL (range, 1,577-296,286 TL). The patient who had the costliest treatment died. The treatment cost was probably higher in our study because of the increased use of surgical equipment and invoicing, and the accompanying injuries of the patients were more complicated. The mean hospitalization period was eight days (range, 1-45 days).
(a)

Traumatic amputations show a consistent ratio in relation to wars since the advent of modern surgical techniques in the second half of the 20th century.[12,13] During the Vietnam war, the amputation rate was estimated to be between 5% and 8%,[12] whereas Stansbury et al.[14] documented a major extremity amputation rate of 7% among all combat casualties with extremity injuries. In our study, amputation accounted for approximately 25% of all treatments. We think that traumatic amputation is higher since 68.2% of the injuries were categorized as high-energy injuries, which were caused by handmade explosives, landmines, and rockets. In addition, it is inevitable that this rate would be high as the patients included in the study were brought from the battlefield.[9]

In the literature, the use of an external fixator for the initial treatment of open fractures has been well established.[15-19] External fixation allows a simple and rapid intervention to stabilize and prepare the patient for the next step of the treatment.[20] A study by Alhammoud et al.[21] included more patients with Gustilo-Anderson types 1 and 2 rather than type 3. On the contrary, all the patients were classified as Gustilo-Anderson type 3 in our study. Out of 88 treatments, 36 consisted of external fixators (40.9%).

The limitation of this study was that it included a relatively limited number of patients in a retrospective study design. In addition, since the soldiers returned to Syria after being discharged, data for recent follow-up and late complications were not available. Nevertheless, we believe that this is an eligible study to show the high rates of morbidity, mortality, and cost of injuries in the battlefield.[22]

In conclusion, registration data of large patient populations with high financial costs, which cannot be reached by the health system due to language restrictions, creates serious health problems.[23] Thus, we believe that the results obtained from this study will contribute valuable information to the literature. Moreover, increased warfare technology correlates with the severity of military injuries in battlefields. These injuries are still associated with high traumatic amputation rates, high-risk complications, and high costs.