Patients and methods: A transverse scaphoid waist fracture (Herbert type B2) model was fixed with either single or double cannulated compression screws. Displacement and rotation of the fragments were performed using three-dimensional finite element analysis in three different wrist positions. A retrospective review was performed on 13 male patients (mean age 31.6±12.8 years; range, 17 to 64 years) who underwent double screw fixation for an established scaphoid nonunion in our clinic between January 2015 and December 2017. Assessment of union was established with serial plain radiographs in eight patients and with wrist computed tomography in five patients. Clinical evaluation was performed using the Mayo wrist score and visual analog scale (VAS).

Results: In all wrist positions, the displacement of the fracture gap in double screw fixation in all planes (x, y, and z) was less than in single screw fixation. Similarly, rotation of the fracture fragments around the longitudinal axis of the scaphoid was lower in double screw fixation. Complete union was obtained in all patients. The mean time to union was 5±0.75 months (range, 4 to 6 months). The mean VAS was 0.8±0.9 (range, 0 to 3). Mayo wrist score was 91±6.9 (range, 80 to 100) at the final follow-up.

Conclusion: Double-screw fixation technique may be a solution to reduce the rate of scaphoid nonunion in unstable type B2 scaphoid fractures or nonunion.

Nonunion after scaphoid fractures is a multifactorial problem, and various factors may play a role in the development of nonunion. However, two crucial biological features of scaphoid bone among all other factors are vitally important. First is the vascular characteristic of the scaphoid bone. Secondly, 80% of the scaphoid surface is surrounded by cartilage; thus primary bone healing, also called Haversian bone healing, takes place without a callus formation.[5,6] Furthermore, even under physiological loading in static wrist positions, the scaphoid bone is subjected to translational, bending, and rotational forces. As a result, in case of insufficient fixation, these forces may cause tearing of the newly-formed vasculature that leads to deterioration of the vascular supply and consequent nonunion.[5]

This retrospective study was conducted at Antalya Training and Research Hospital between January 2015 and December 2017. In this study, three- dimensional (3D) finite element stress analysis was utilized based on isotropic materials and static linear analysis in a computerized environment. On a complete transverse scaphoid fracture (Herbert classification, type B2) model, fixation was performed with a headless variable pitch compression screw in two different configurations from the volar approach (distal to proximal direction). In the first fixation technique, single 3.5 mm compression screw (Acutrak 2 Mini, Acumed, Hillsboro, OR, USA) fixation was applied, and in the second fixation technique, two parallel 2.5 mm compression screw (Acutrak 2 Micro, Acumed, Hillsboro, OR, USA) fixation was applied (Figure 1). The screw fixations were simulated parallel to the scaphoid long axis, and perpendicular to the fracture plane. 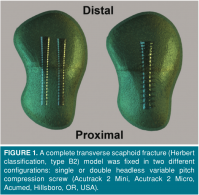 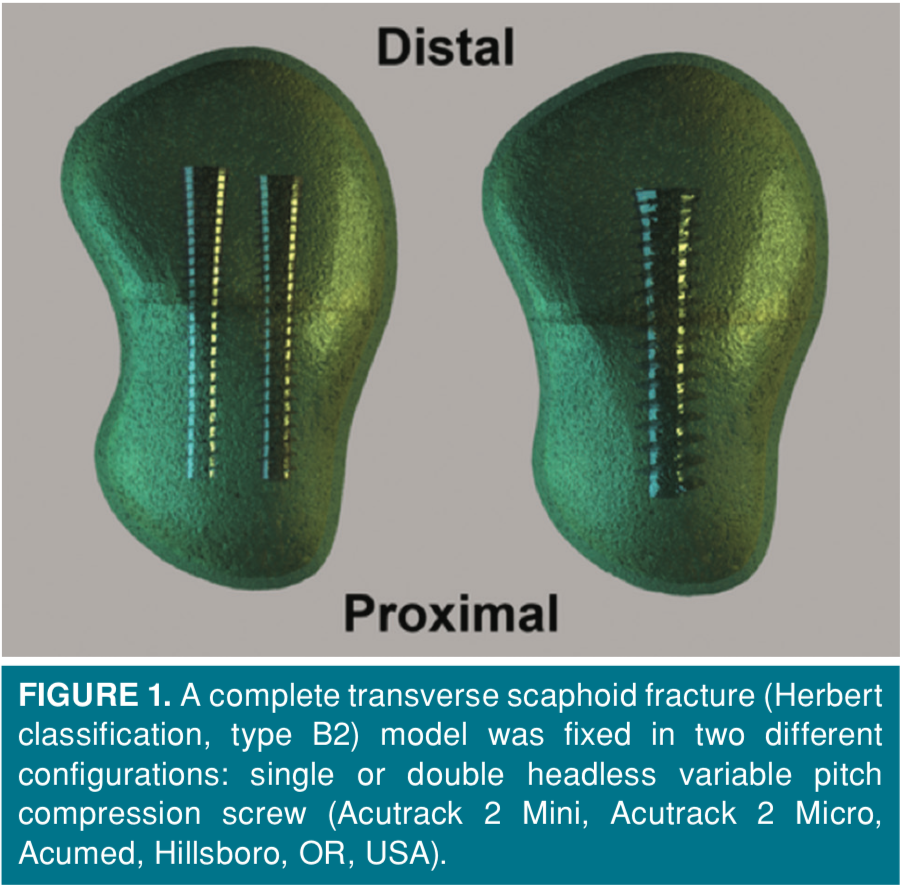 Normal physiological loading was applied in these models in loaded neutral (N), maximum extension (ME), and maximum flexion (MF) static wrist positions. The normal physiological loads were calculated as described by Varga et al.[12] These forces are described as a combination of the magnitude of the cartilage contact forces and ligament forces acting on the scaphoid. The contact pressures over the contact areas for each bone surrounding the scaphoid were integrated to compute the cartilage contact forces and the ligament forces on the scaphoid were computed according to the ligament insertion points.

The models were created geometrically on VRMesh software and transferred to Algor Fempro software in stereolithography (STL) format (a universal file format for 3D modeling software) for analysis. The coordinates of the nodes were saved in the STL format so that part of an assembly could be transferred between different software.

The wrist modeling was based on data obtained from the “Visible Human Project” study.[13] Axial scans adopted from that study were reconstructed in 3D-doctor software (Able Software Corporation, 5 Appletree Lane, Lexington, MA, USA) by extracting bone tissue. The 3D model was exported in STL format. The wrist modeling was applied using the mesh modeling technique. The models were converted to solid models as bricks and tetrahedral elements, and in this modeling system, Fempro uses eight-noded elements as far as possible. When the required detail could not be obtained with eight-noded elements, seven, six, five, and four- noded elements were used, respectively. The models used more than one million elements, and all the models were accepted as homogenous and isotropic materials. A homogenous material had the same mechanical properties in each structural element, and an isotropic material had uniformly the same material properties in all directions. Linear elasticity is the proportional variability of deformation of the structure.

The physical properties (Young's modulus and Poisson's ratio) of all the materials forming the model are shown in Table I. Friction contact interaction was defined between the bone surfaces in the fracture plane with the friction coefficient set to 0.4 at the fracture interface.[14]

The screws were 3D scanned by smart optics and saved in STL format. A transverse waist fracture was created, perpendicular to the long axis of the scaphoid (Herbert classification type B2). These files were then opened in Rhinoceros software, and the adaptation of the implants to the other sets was managed and transferred to Fempro analysis software with the 3D coordinates preserved. The fracture fixation was modeled in two different screw fixations, as single volar or double volar.

Loading was applied in three different static wrist positions of ME, MF, and N. No further loads were applied to the scaphoid in these wrist positions other than normal physiological loads. In each wrist position, the direction and magnitude of these loads change, as described in detail by Varga et al.[12]

In the control group, four different points were randomly identified on the fracture plane. In ME, MF, and N positions, the maximum displacement was calculated separately at x, y, and z coordinates in these points. The point at which the maximum displacement occurred was selected, and this selected point was used as a guide in all other calculations in the fixation models (Figure 2). 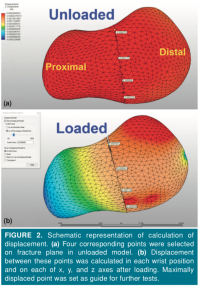 Figure 2. Schematic representation of calculation of displacement. (a) Four corresponding points were selected on fracture plane in unloaded model. (b) Displacement between these points was calculated in each wrist position and on each of x, y, and z axes after loading. Maximally displaced point was set as guide for further tests.
× 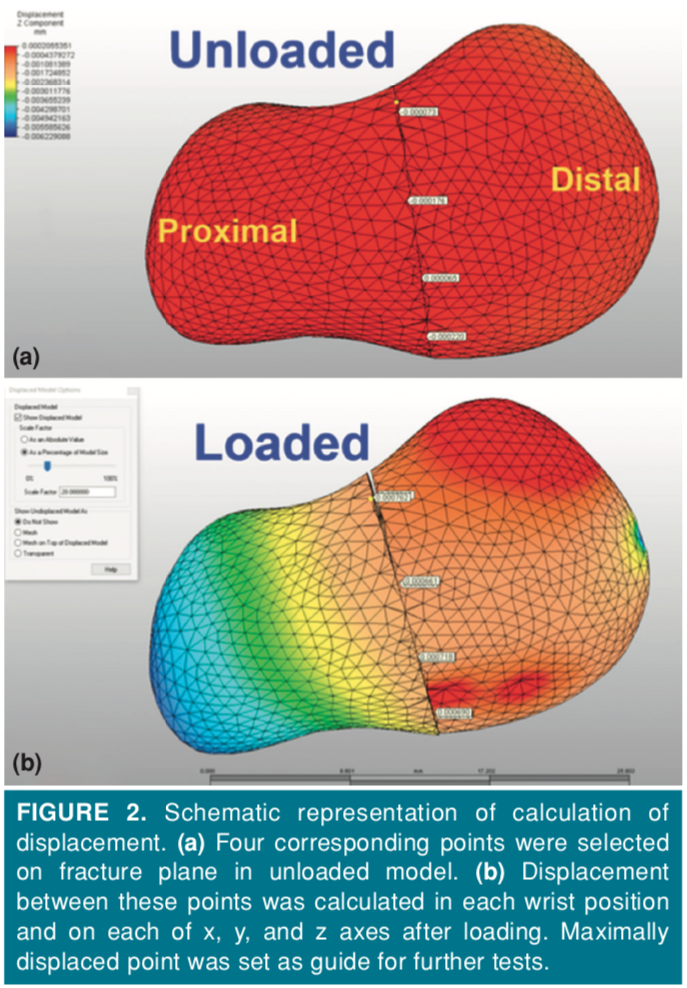 Two symmetrical vectors were defined at the fracture interface in the proximal and distal fragments in the unloaded scaphoid models. In ME, MF and N, the loading rotational movements of these vectors were calculated to analyze the rotational displacements of the model (Figure 3). 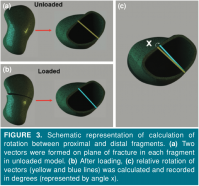 Figure 3. Schematic representation of calculation of rotation between proximal and distal fragments. (a) Two vectors were formed on plane of fracture in each fragment in unloaded model. (b) After loading, (c) relative rotation of vectors (yellow and blue lines) was calculated and recorded in degrees (represented by angle x).
× 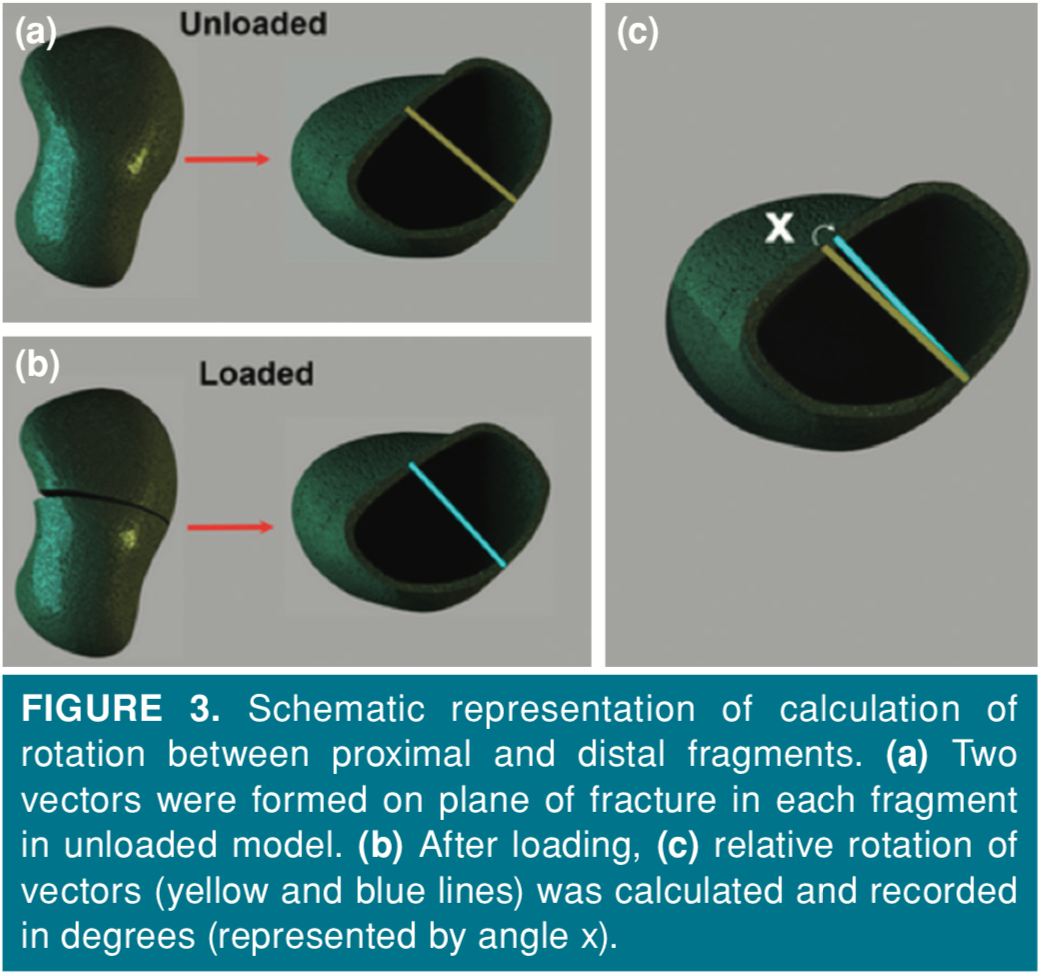 A retrospective review was performed on 13 male patients (mean age 31.6±12.8 years; range, 17 to 64 years) who underwent double screw fixation for an established scaphoid nonunion in Antalya Training and Research Hospital between January 2015 and December 2017. The mean follow-up period was 23.2±9.2 months (range, 7 to 39 months). The study protocol was approved by the Antalya Training and Research Hospital Ethics Committee. A written informed consent was obtained from each patient. The study was conducted in accordance with the principles of the Declaration of Helsinki.

A volar approach was used in all patients, and two headless cannulated compression screws (Acutrack 2 Micro, Acumed, Hillsboro, OR, USA) were used for the fixation of fractures. In five patients, tricortical iliac bone graft was used, and the remaining eight patients received autologous cancellous bone graft. Assessment of union was performed with serial plain radiographs. In case of suspicion, computed tomography (CT) was used to confirm the union. Union was accepted as the disappearance of the fracture line on three-view (posteroanterior, lateral, and scaphoid views) radiographs of the wrist and the observation of the trabecular bone bridging. Presence of cortical penetration of the screws was examined on the tomography images.

Functional outcome and pain were assessed with the Mayo wrist score and visual analog scale (VAS), respectively. Summary of clinical characteristics and functional results are summarized in Table II. All complications throughout the follow-up period were recorded such as revision surgery, infection, and wound problems. Furthermore, time to return to work, and the level of sporting activity reached after healing were evaluated.

Table 2. Summary of clinical characteristics and functional results of all patients
×

No statistical analysis was possible as the values obtained from the finite element stress analysis emerged from mathematical calculations without any variance. The critical issues were the precise assessment and the amount and distribution of the stress on the scans.

Complete bony union was obtained in all patients (Figure 4). The mean time to union was 5±0.8 months (range, 4 to 6 months). The mean VAS was 0.8±0.9 (range, 0 to 3) and the mean Mayo wrist score was 91±6.9 (range, 80 to 100) at the final follow-up (Table II). In five patients, where CT was taken, no cortical penetration of the screws was observed. No findings of screw loosening or migration were seen on the serial radiographs and final CT images (Figures 5 and 6). 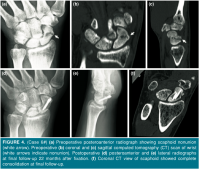 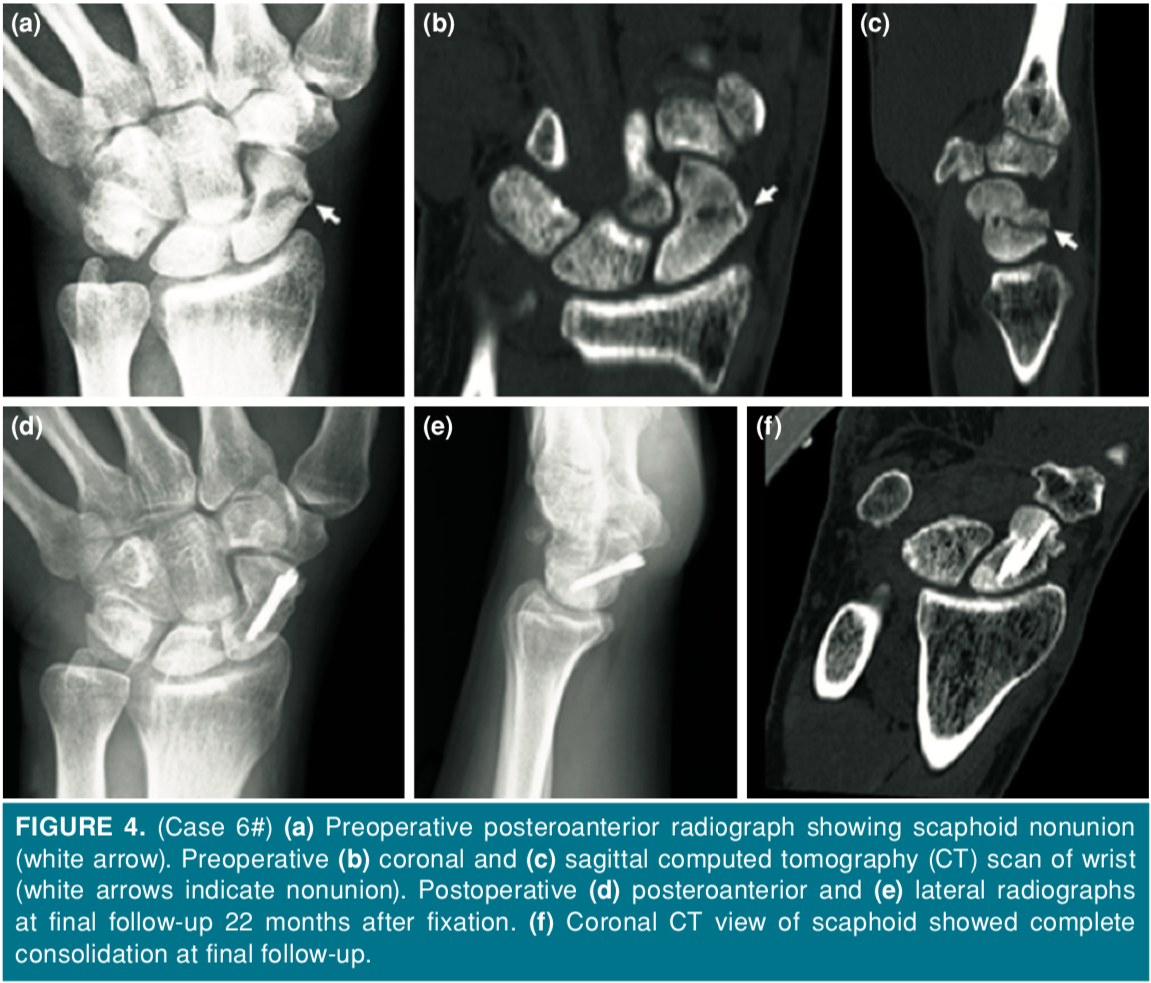 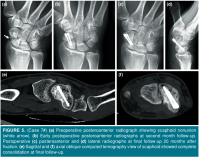 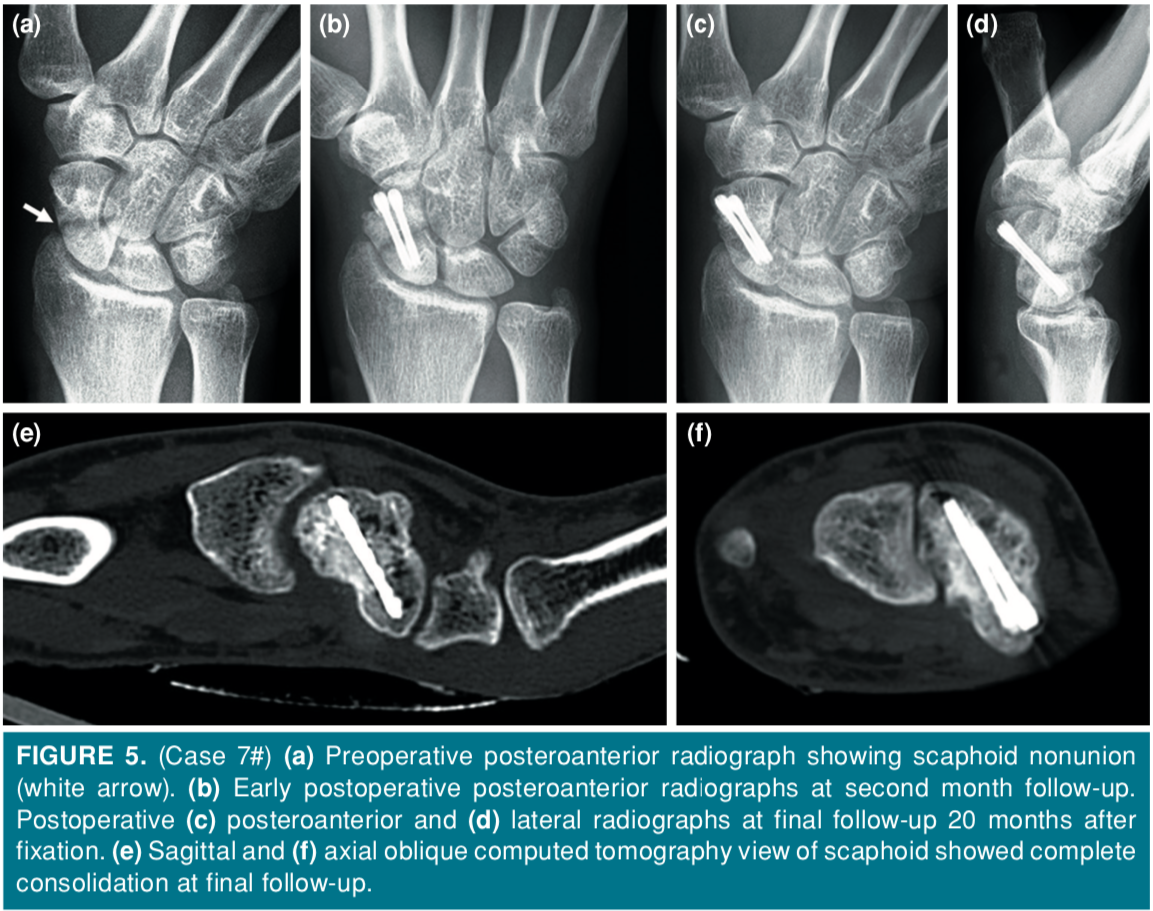 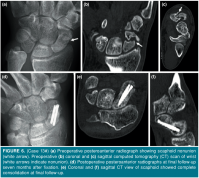 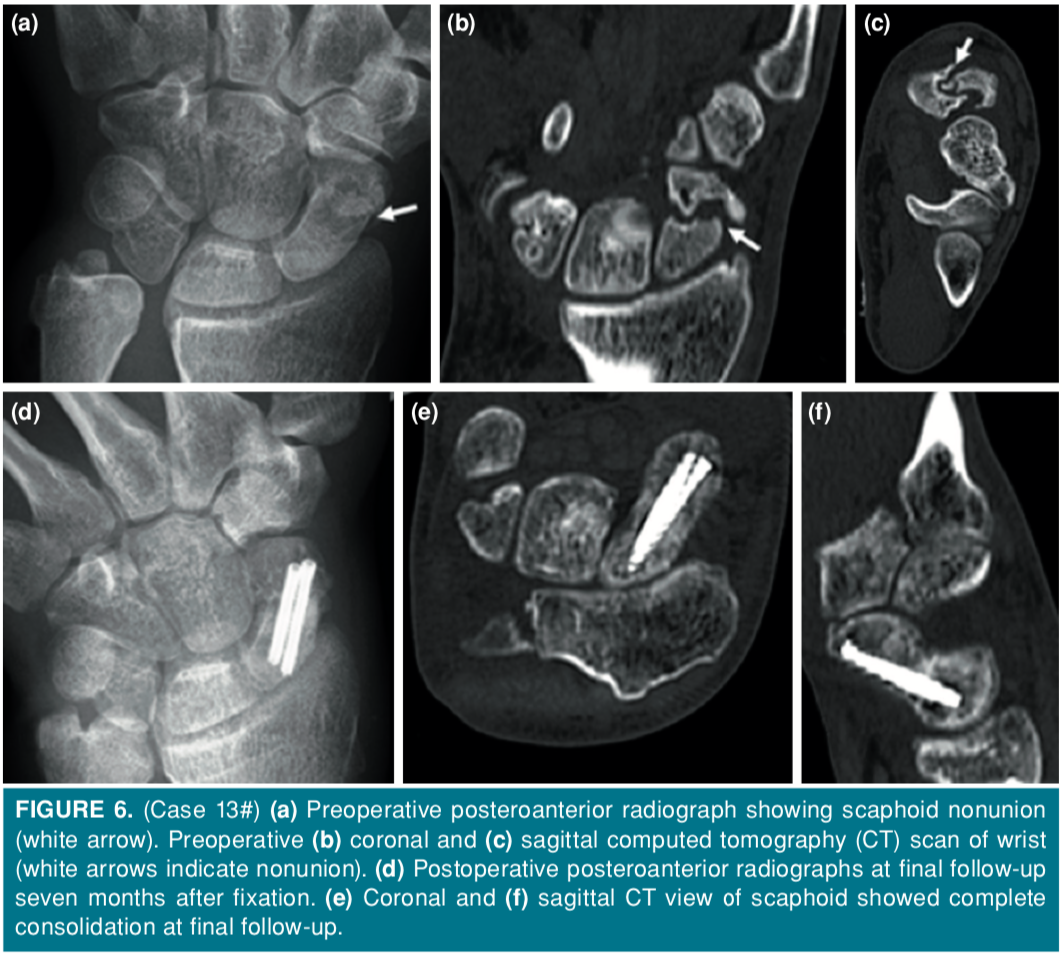 No patients required revision surgery. No infection or complications were observed in any patient. All patients regained the preoperative level of working capability and sporting activity without any restriction.

Achieving union is a clinical problem in scaphoid fractures due to its anatomical and biomechanical characteristics. The scaphoid bone acts as a bridge between the wrist and the distal row carpal bones and is continuously exposed to shear forces. The scaphoid is nourished with a single vascular supply from the distal towards the proximal part. Thus, in case of a fracture, the vascularity of the proximal part is compromised. It is entirely intraarticular and covered with articular cartilage which limits the availability of the fixation techniques.[5,6,15] Advances in implant technology, such as the development of new screws and scaphoid plate designs providing compression, have significantly reduced the rates of scaphoid nonunion. Despite the range of these new techniques and implants used, the search for a more stable method for scaphoid bone fixation continues.[8]

Previously, few biomechanical studies have compared bone fixation with single versus double screws in scaphoid fractures, and the results of these studies provided conflicting conclusions.

The stability of implants used in scaphoid bone fractures is usually tested under laboratory conditions with forces applied at a single angle of the wrist until implant failure develops in cadavers.[16] However, this testing methodology may not reflect the real physiological biomechanics and may not be valid for real conditions. For this reason, in this study, biomechanical comparisons were performed with the finite element analysis for mimicking physiological loadings.

This study has both strengths and limitations. Although the fracture was standardized, only one type of fracture model was tested, and in reality, there may be a variety of fracture types and/or comminution. Furthermore, the test results may be affected by morphological variations in the size and shape of the scaphoid. Screw fixation (parallel to the long axis of the scaphoid and perpendicular to the fracture plane) was also standardized; however, in reality, it may be challenging to achieve this optimal position. Moreover, physiological loads were simulated in only three static wrist positions, while ulnar and radial deviation, supination, and pronation were not taken into consideration. Nevertheless, subjective bias was eliminated with the use of computerized calculations in all models. In the clinical part of the study, the inclusion of a limited number of patients and the retrospective collection of data are the two significant limitations.