Objectives: This study aims to investigate if geometrical modelling in addition to three-dimensional (3D) modelling will standardize models and allow performing mathematical calculations easily for the compatibility of femoral implant curvature.

Patients and methods: The study included 50 subjects (27 males, 23 females; mean age 55 years; range, 21 to 84 years). The femoral shaft intramedullary cavity was resembled into a chord of the ring cyclide, where the rotational radius was centered at its smallest radius. A 3D evaluation of the left femoral computed tomography data of the subjects was used to investigate the population parameters. The fitting was defined as being between the anterior and posterior border radii in the sagittal plane.

Results: The best fitting radius of implants was in between 90 to 99 cm in 72% of subjects in our sample. These radii values were lower than the mean intramedullary and cortical centerline radii which had only 62% and 50% fittings, respectively, among our population sample. The bowing radii and the smallest intramedullary width increased with the femoral length. These values were not affected by gender.

Conclusion: This modelling may have value for understanding femoral shaft intramedullary cavity geometry and may be a good tool to assess implant fitting.

The femur has a natural bowing in the shaft region, which is unique in large bones.[1] Any implant that will be put into femoral intramedullary cavity must be bowed. Any significant mismatch between the implant and femoral bowing may lead to complications.[2-6]

The existing femoral shaft geometry studies are usually performed as a cross-sectional study[7] or as a bowing measurement study.[8] During the measurement of femoral bowing from the plain radiographs, the maximal femoral bowing axis is not always perpendicular to imaging direction.[9] Hence, the measurements will be different than the actual values. On the other hand, cross-sectional studies are mostly related with structural anatomy. Three- dimensional (3D) modelling allows very accurate determination of the maximal bowing plane. The 3D design method is virtually equivalent to the direct measurement of the bisected dried femur in vitro.[10] During pre-study evaluations, we noticed that intramedullary structure of femur shaft have a close resemblance to a geometrical model called ring cyclide (Figure 1).[11] For this purpose, the femoral shaft intramedullary cavity was resembled into a chord of a ring cyclide (Figure 2), where the rotational radius was centered approximately at its smallest radius (Figure 3). Therefore, in this study, we aimed to investigate if geometrical modelling in addition to 3D modelling will standardize models and allow performing mathematical calculations easily for the compatibility of femoral implant curvature.[12] 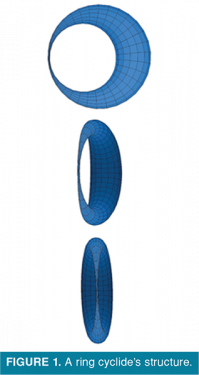 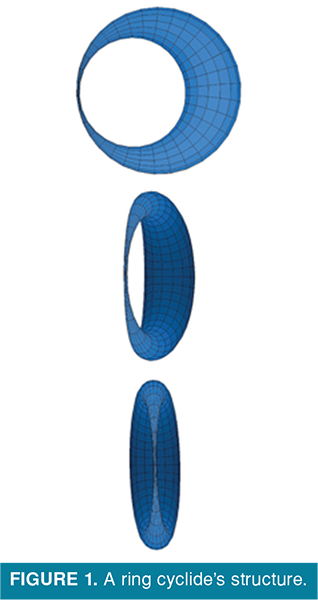 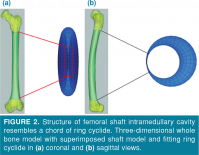 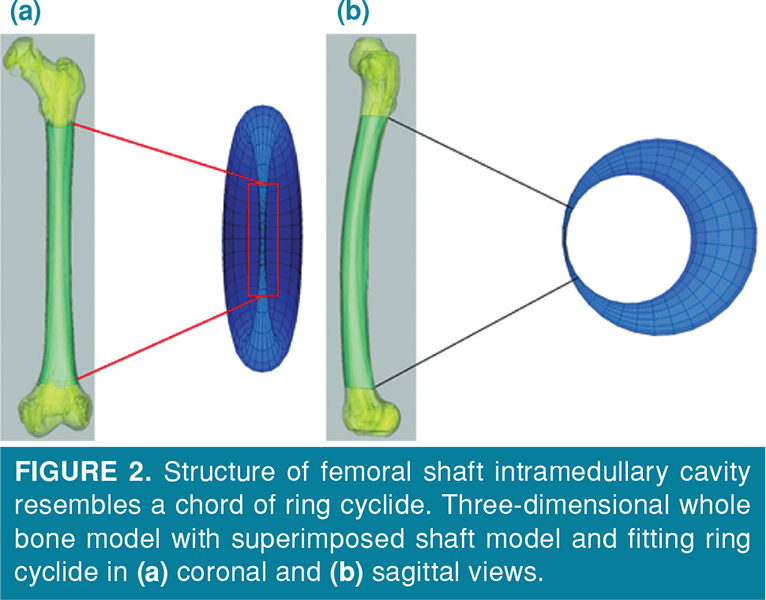 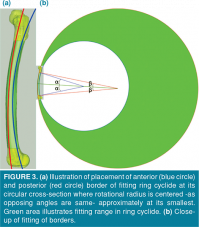 Figure 3. (a) Illustration of placement of anterior (blue circle) and posterior (red circle) border of fitting ring cyclide at its circular cross-section where rotational radius is centered -as opposing angles are same- approximately at its smallest. Green area illustrates fitting range in ring cyclide. (b) Close- up of fitting of borders.
× 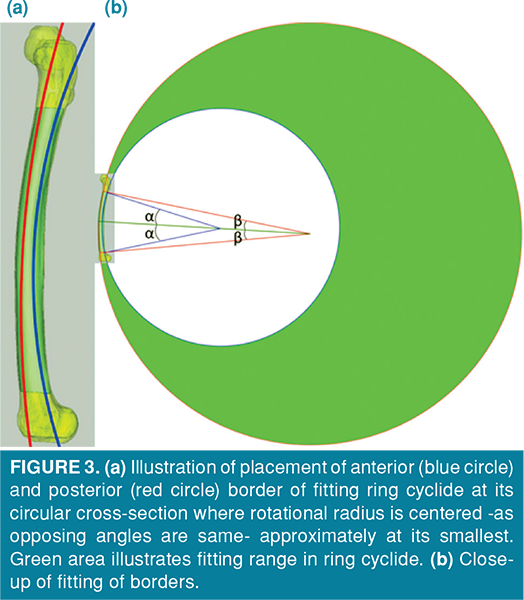 This study was conducted at Faculty of Medicine Hospital, Pamukkale University between November 2015 and April 2016. The femoral computed tomography (CT) scans which were taken before in our institution for another reason between January 2011 and December 2011 were retrospectively evaluated for suitability. Inclusion criteria were (i) use of a standard protocol while taking CT scans (12 kV, 195 mAs), (ii) the whole femur scan including adjacent joints being in a single field of vision, (iii) a scanning resolution of 512×512 pixels, (iv) the scanning being sequential and in a standard slice thickness of 5 mm thick and 5 mm apart, and (v) being aged more than 18 years. Exclusion criteria were excessive osteoporosis as a result of aging or previously taken chemotherapy or radiotherapy etc., previous operations, a present deformity, metallic objects/implants at the lower extremity and/or pelvis, any tumoral lesion and/or metastatic lesion in lower extremity and/or pelvis. After application of inclusion and exclusion criteria, 50 consecutive patients (27 males, 23 females; mean age 55 years; range, 21 to 84 years) were chosen for a 3D evaluation. The study protocol was approved by the Pamukkale University, Denizli, Turkey, Ethics Committee. A written informed consent was obtained from each subject. The study was conducted in accordance with the principles of the Declaration of Helsinki.

By using CT data, models were created with the Mimics version 10 (Materialise, Leuven, Belgium) 3D modelling program, as previously described.[2] The minimum thresholds used were in accordance with findings of Kang et al.[13] Two masks for each of the left femur were created to separate bones effectively. After that, a corresponding ring cyclide was virtually defined for each femur model (Figures 3, 4). The intramedullary and cortical centerline bowing radii were also calculated by using the sagittal centers of the radii calculation points, as previously described by Harma et al.,[14] however, the environment was 3D. The smallest coronal and sagittal intramedullary cavity widths were also found. Whole bone models were used to measure the axial femur length, which was the distance from the piriformis fossa to the intercondylar notch. The curved sagittal nail length and bowing angle were geometrically calculated as previously described by Harma et al.[14] Each measurement was repeated six times per subject, and the highest and lowest readings were discarded. The average of the four measurements was used. The thickness measurements of this study resulted in an error range between 5.3% and 10.8%, which is 3.2% and 7% for the best fitting radius. The groups were female and male femur models.

An independent samples t-test was used for the analysis of age- and gender-related data whereas a dependent samples paired t-test was used for the measurement of data by using Stata version 8 (Stata Corp., Texas, USA) software. The data were analyzed with a 95% confidence interval and a p<0.05 was considered statistically significant. A priori power analysis was not performed; this was considered as a pilot study.

The bowing angles ranged between 12° to 36°, with a mean of 22.2°. The mean values were not statistically significantly different between males and females (p=0.756).

Table 1. Summary of ages of subjects and measured parameters
× 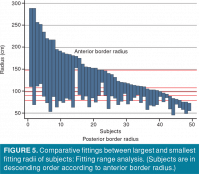 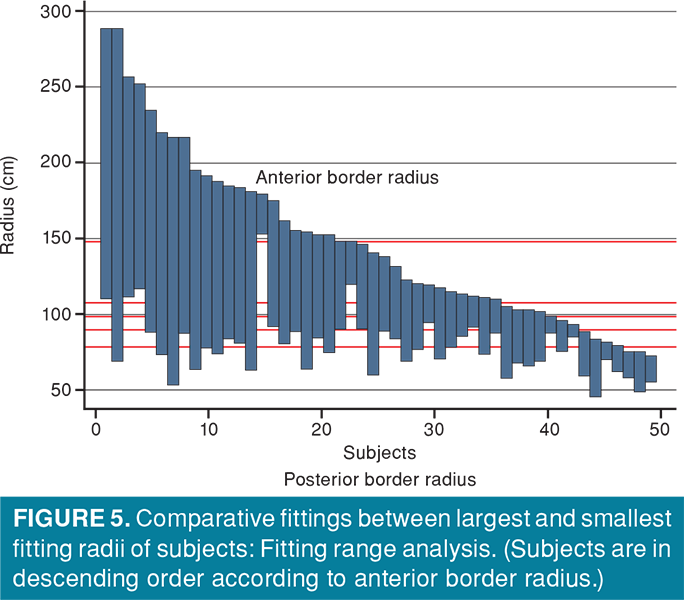 The bowing radii (intramedullary or cortical) and the smallest intramedullary width (sagittal or coronal) were increased with the femoral length in this sample. These values were not affected by gender. The findings are comparable with those of Maratt et al.[8] who postulate that femoral length is important for intramedullary bowing, while aging or gender have no effect. There is an increase in coronal intramedullary cavity width with aging; however, there is no statistically significantly different change in sagittal width. These findings are in concordance with those of Feik et al.[7] who pointed out that aging causes a differential circumferential modeling and the effect of osteoporosis is mainly on the anterior cortex. The intramedullary bowing does not have a statistically significant correlation with aging, but the cortical bowing decreases similar to findings of Maratt et al.[8] suggesting that there is no change of intramedullary bowing with aging.

The previously published results of femoral bowing range between 109 and 144 cm;[3,4,6,15] however, there are differences in the measurement techniques. In a recent study performed by Maratt et al.,[8] the mean medullary radius of curvature of the femur was found as 110.4 cm in Caucasian Americans, which was 122.2 in African Americans and 101.1 in Asian Americans. The mean inner anterior cortex radius of curvature of the femur was found as 145.5 cm, 154.5 cm and 129.7 cm, respectively. Our results were comparable with them, particularly with Caucasian Americans. In a study by Buford et al.,[2] in 19 cadaveric femur specimens (largely Caucasians) using a similar protocol to that used in this study, the anterior medullary canal radius of the curvature was shown to have a mean of 147.8 cm (calculated from given data) which is in accordance with this study. In a recent study with 3D design, Schmutz et al.[16] found mean radius of curvature in the natural 3D antecurvature plane as 97.4 cm for Caucasians which was close to our findings (107.4 cm in our study). However, a digital lateral radiogram work of Harma et al.[14] have reported a value of 77.2 cm in Anatolian people which remains the lowest value reported before in the literature for Caucasians.[16] In another study, Biçer et al.[17] found a mean of 100 (one observer) and 120 cm (two observers) for anterior cortex curvature at 84 cadaveric femora of Anatolian people with no gender discrimination.

The established parameters for defining a corresponding ring cyclide model for a femoral intramedullary cavity can be calculated from the plain radiograms if magnification is standardized. However, the major problem will remain, which is the maximal bowing plane in that the circular cross- section of the ring cyclide lies. Its determination before taking radiograms will be very difficult particularly in subjects with coronal femoral bowing. However, 3D modelling allows accurate determination of the maximal bowing plane. The 3D modelling method is virtually equivalent to the direct measurement of the bisected dried femur in vitro.[14]

The limitations of this study are the subjective nature of reference point selection for the measurement of bowing radii and distances and its inherent error.[2] Additionally, it is conceivable that reconstruction artefacts occur in the process of creating the 3D-CT models.[2] The sample size of this study may be considered small for definitive conclusion. Furthermore, the sample was derived from 5 mm-thick and 5 mm-apart sequential CT data, which reduce the resolution.

In conclusion, the design of this study which is based on a ring cyclide model may have an important value for understanding femoral shaft intramedullary cavity geometry and may be a good tool to assess implant fitting for population studies. Furthermore, the method of modeling may lead to a new way of thinking in the interpretation of femoral geometry.