Materials and methods: Computed tomography (CT) images of a healthy 35-year-old male patient who had no history of trauma or fracture were modeled in three-dimensional (3D) with Mimics® software for the lumbosacral spine model. Ligaments and discs were created on the 3D spine model in the SolidWorks® program. The obtained model was sent to the ANSYS version 18 software, and analyses were done non-linearly. All analyses were performed at different angles and forces from the center of the sacral surface to simulate traction therapy.

Results: Traction forces applied in the 0° axial direction decreased the intradiscal pressures by creating a similar tensile stress in the annulus fibrosus regions (anterior, posterior, and lateral) without any significant change in lordotic angle.

Conclusion: The method used in this study is promising to investigate the benefits of traction therapy. Moreover, individual traction force and direction can be determined to increase the effectiveness of the treatment by using magnetic resonance imaging or CT images in traction therapy.

Since the beginning of the 19th century, traction beds were used in the treatment of scoliosis, lumbar disc herniation (LDH), and spinal deformities. Traction therapy is a widely used conservative treatments for LDH. Traction therapy is a suggested method to relieve pain and enhance the joint functionality by diminishing pressure on discs or nerves.[1,2] Traction therapy was used to reduce lower back pain and recover joint functions by applying primary load along the lower-upper axis of the spine, reducing the pressure in the discs and nerves.[3]

A few studies have examined the biomechanical effects of traction therapy. Numerical simulation is one of the widely used methods to elucidate the impact of rehabilitation treatment in terms of biomechanics.[4,5] In the literature, the applied force was enforced in the axial direction from the center of the L1 vertebra to the superior for the studies on lumbar traction biomechanics.[5,6] However, lumbar traction devices used in clinical applications consist of two parts, the upper body with arm holders and the movable lower body, which provides positioning of the lower extremities.[7] As in our study, the direction of the force applied in clinical applications is toward the body inferior in the axial direction.[8]

We may use finite element analysis (FEA) to better understand biomechanics, make better choices, and make therapeutic decisions. It can be used as a non-invasive tool to assess the biomechanical qualities of existing and new treatments, as well as to replicate surgical operations in clinical cases. It can also be used as an alternative to investigations that are costly, need specialist equipment for implementation, or involve animals or cadavers that are morally sensitive.[9,10]

Creation of the intact models

In this study a three-dimensional (3D) non-linear FEA of the lumbosacral spine was developed. In our study, computed tomography (CT) image of a 35-year-old healthy man in a supine position (height: 172 cm, weight: 71 kg) was examined. The CT images were obtained by scanning at 135 kV at a pixel size of 0.625 mm and resolution of 512x512 pixels. The patient without spine injury, osteoporosis, and radiographic fracture history were used to create the 3D geometry of the spine. 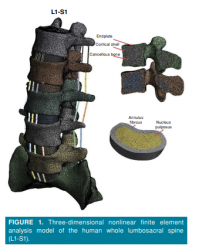 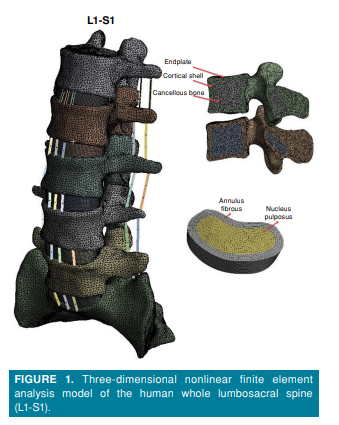 The lumbosacral spine model was submitted to ANSYS Workbench version 19 (Ansys Inc., Technology Drive, Canonsburg., PA, USA) to run the FEA. Mesh structures were created as shown in Figure 1. The material properties of the lumbosacral spine are given in Table I. The models are assumed to be homogeneous, isotropic, and linear elastic.[12-15]

Table 1. Material properties are used in the basic FEA model
×

For the FEA of the prepared 3D lumbosacral spine model, the mesh structure was created as shown in Figure 1. The mesh quality was selected based on literature data, angle, skewness, concerning element size and aspect ratio. Mesh convergence was tested by reducing element sizes. Element dimensions for vertebrae and discs were determined as 2 mm and 1 mm, respectively. Additional mesh improvements were applied in the contact zones to achieve convergence.[16] The final FEA model consisted of an average of 687514 element numbers and 1189462 nodes. Two nodes of each vertebra from the anterior-inferior and posterior-inferior corners in the sagittal plane were decided to measure the lordotic angles. The tilt angle of each vertebra was calculated from the coordinates of the two selected nodes. Next, the intersegment lordotic angle was calculated from the difference between the two inclination angles of the adjacent vertebrae (Figure 2a). The annulus fibers were partitioned into anterior, posterior, and lateral regions, and maximum von Mises stresses were recorded during traction (Figure 2b). All analyses were performed non-linear according to the Newton-Raphson method.[16]

Figure 2. (a) Measurement of lordotic angle. (b) Partition of annulus fibers.
×

The traditional device used in traction therapy consists of two main parts. With the help of the first piece, the upper part of the patient is fixed by using a thoracic belt and corset so that the body resistance does not oppose the applied force. Pulling is applied by moving the second part on the rail by applying force in the direction of the body inferior.[7] For the analysis of traction therapy, the upper surface of the L1 vertebra was fixed sport, since the upper part of the body was fixed. A force of 30%, 50%, and 70% of the body weight (BW) was applied from the center of the sacral surface to the lower side of the body. Loading angles were determined as 0° axial, 30° corpus, and -30° facet (Figure 3). 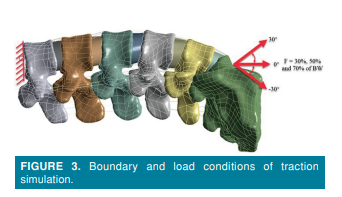 The study protocol was approved by the Amasya University Faculty of Medicine Clinical Trials Ethics Committee (No: 105). The study was conducted in accordance with the principles of the Declaration of Helsinki.

In this study, L4-L5 and L5-S1 segments were evaluated according to the following criteria: (i) lordotic angle, (ii) IDP, (iii) stress of annulus fibers. 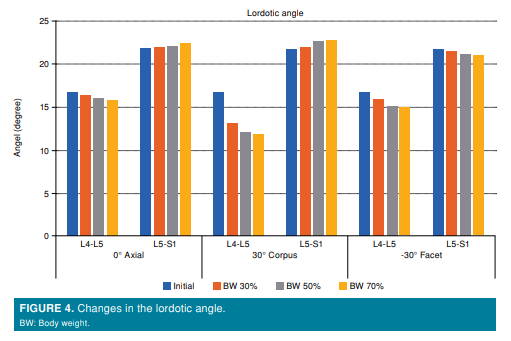 The initial IDP at each model was assumed to be zero. Comparison of IDP at different traction angles and different traction forces is seen in L4-L5 and L5-S1 segments in the lumbar spine (Figure 5). The IDP values decreased in proportion to the applied force when traction was applied in the 0° axial direction and 30° corpus direction. However, no significant change in IDP was observed at the applied forces in the -30° facet direction. 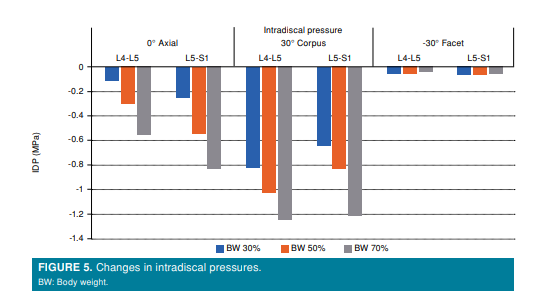 Figure 6. Maximum stresses on the fibers of the annulus fibrosus. BW: Body weight.
× 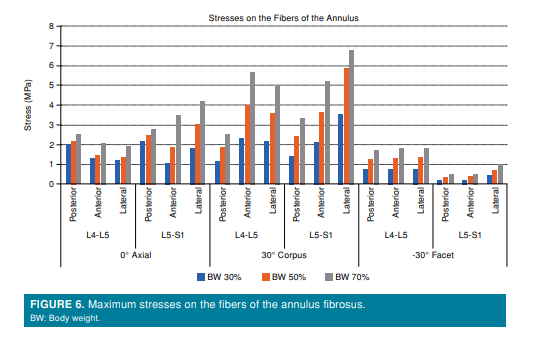 Traction is widely used in the treatment of disc herniations in the clinic. Lumbar disc herniation is most commonly seen in the L4-L5 and L5-S1 segments.[17] There are many clinical and biomechanical studies examining traction therapy.[5,6] However, there is no other study evaluating the changes in stresses on annulus fibers, lordotic angle and IDP during traction treatment at different angles and strengths applied from the lower part of the body to the distal.[18] Therefore, this study biomechanically examined the effectiveness of lumbar traction therapy in L4-L5 and L5-S1 segments in different directions and forces using the FEA.

According to the results of the current study, while lordotic angle changed in L4-L5 and L5-S1 segments, IDP decreased in all traction treatments. Annulus fibers were under tensile stress during traction. Since the stress increase in posterior fibers is undesired due to the risk for annular tear or extension of the present tear, the traction force direction and magnitude must be selected according to the effect of stress rise at posterior fibers. The FEA results obtained as a result of the analyses can provide an understanding of the effectiveness of traction therapy. In addition, it can help to prevent soft tissue injuries that may be caused by the direction and severity of force to be applied during the treatment.

The IDP measurement is one of the most appropriate methods to evaluate spinal loading.[19] Mechanical loads change the IDP. Therefore, it directly affects the stresses experienced by the annulus fibrosus.[20] As a result, the annulus fibers are damaged and cause herniation. In order for the hernia to be retracted, the IDP must decrease. In addition, IDP decompression assists the retraction of the hernial disc. It also improves the nutrition of the disc and regulates the chemical environment of pain receptors in the annulus.[21,22] Park et al.[5] performed assisted and unassisted axial traction analyses in their biomechanical study. In the aforementioned study, IDP values decreased in all segments as a result of unassisted traction. Non-significant IDP changes were observed in traction forces in the -30° facet direction in segments L4-L5 and L5-S1 in our study. In addition, IDP decreased significantly at all forces when traction was applied in the 30° corpus and 0° axial directions. However, more significant IDP reduction was observed in the 30° corpus direction.

There are some limitations to this study. Although FEA is a useful tool for understanding the mechanical behavior of biological materials, it is susceptible to a variety of errors that may occur throughout the computerized analysis process.[23] The simplified modeling used in this study may not accurately portray the lumbar region's complicated structure. Material attributes and boundary conditions have also been described using various assumptions. Due to the limitations of FEA, outputs may not accurately reflect real-life situations; nonetheless, even approximate results can provide useful information.

In conclusion, FEA was used to evaluate the biomechanical effects of different traction forces applied in the 0° axial, -30° facet and 30° corpus directions on L4-L5 and L5-S1 segments in this study. Traction forces applied in the 0° axial direction decreased the IDP pressures by creating similar tensile stress in the annulus regions (anterior, posterior and lateral) without a significant change in the lordotic angle. However, as it does not reduce the lordotic angle in the L4-L5 segment, a 70% BW force can be applied in the -30° facet direction. Also, traction therapy can be applied for the L5-S1 segment at 30° corpus direction and 30% BW traction force. The method we used in our study may be useful in examining the effectiveness of traction therapy. In addition, the effectiveness of the treatment can be increased by determining the traction force and direction specific to the individual by using magnetic resonance imaging or CT images in traction therapy.