Primary bone malignancies in children pose numerus challenges for orthopedic oncology surgeons. Limb salvage surgery is widely preferred, and biological reconstruction methods such as the vascularized autografts, allografts, radiated or frozen tumor bearing autografts bear the advantage of preserving children’s own anatomy.[1-4] In such cases, conserving the joint and epiphysis may potentially improve the outcome of otherwise debilitating surgeries.[1] In this article, we present a pediatric case of epiphysis-sparing biological reconstruction of the proximal femur.

A five-year-old male patient who had a two- month-old history of inability to bear weight with the left lower extremity presented to our institution’s pediatric oncology department in August 2016. Prior to his visit, imaging with X-rays and magnetic resonance imaging (MRI) followed by a biopsy were performed at an external center with a diagnosis of osteosarcoma (Figure 1). After presentation, his images and biopsy specimens were reassessed at our institution (per routine hospital policy) and the patient was diagnosed with Ewing sarcoma of the proximal femur. The mass was located at the intertrochanteric and subtrochanteric regions, accompanied by a minimally displaced pathological fracture at the femoral neck. Multiple metastatic nodules in his lungs were demonstrated on chest computed tomography (CT). The patient received six cures of vincristine, ifosfamide, doxorubicin, and etoposide (VIDE) as induction chemotherapy. 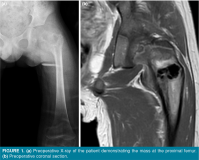 Figure 1. (a) Preoperative X-ray of the patient demonstrating the mass at the proximal femur. (b) Preoperative coronal section.
× 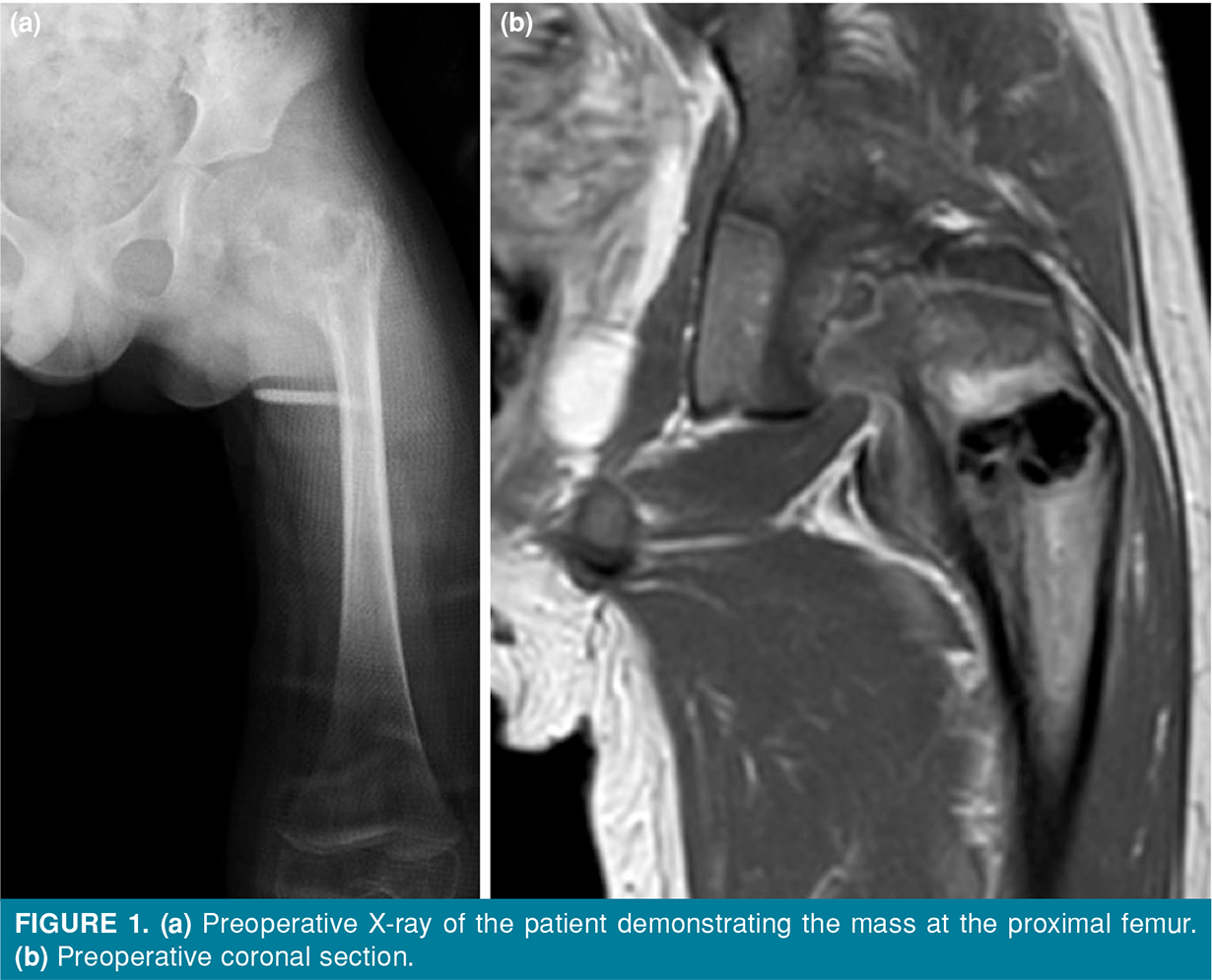 After six cures of VIDE, the control MRI showed that the tumor shrank in response to chemotherapy, and was confined to the intertrochanteric region. With the femoral head epiphysis and the distal two-thirds of the shaft clear of tumoral involvement and the patient’s growth potential in mind, we deemed the patient a good candidate for both joint and epiphysis-sparing biological reconstruction. A written informed consent was obtained from each parent.

With the patient lying supine under general anesthesia, an incision was made from the anterior superior iliac spine to proximal femur. The previous biopsy tract was excised. After exposure, the femoral shaft was cut with a Gigli saw. The proximal femur was exposed, and the hip capsule was opened. The femoral head was cut from the physeal line. The shaft was cut 100 mm distal to the greater trochanter and the proximal femur was resected en bloc. The tumoral tissues were excised from the removed bone fragment. The remaining bone fragment was soaked in liquid nitrogen (LN) for 20 min. The cryoablated bone was left thawing for 15 min in room temperature and, then, kept in 30°C distilled water for 15 min.

The surgical field was closed with wet sponges. Afterwards, an incision was made at the left fibula. After exposure, a 120-mm metadiaphyseal segment of the proximal fibula was prepared as a vascularized autograft. The defect in the proximal femur metaphysis was reconstructed with the vascularized fibula covered by the LN-treated bone. The autografts were fixed to the femoral head epiphysis and shaft with a PHILOS plate (DePuy Synthes, Warsaw, IN, USA) and a headless compression screw (Artfiks, Ankara, Turkey) (Figure 2). The vascularized fibula was microsurgically anastomosed to the perforating femoral arteries and veins. A surgical drain was placed, and the wounds were closed. The patient was, then, transferred to the postoperative intensive care unit (ICU) as planned preoperatively. 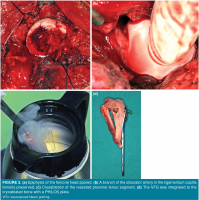 Figure 2. (a) Epiphysis of the femoral head spared. (b) A branch of the obturator artery in the ligamentum capitis femoris preserved. (c) Cryoablation of the resected proximal femur segment. (d) The VFG was integrated to the cryoablated bone with a PHILOS plate. VFG: Vascularized fibular grafting.
× 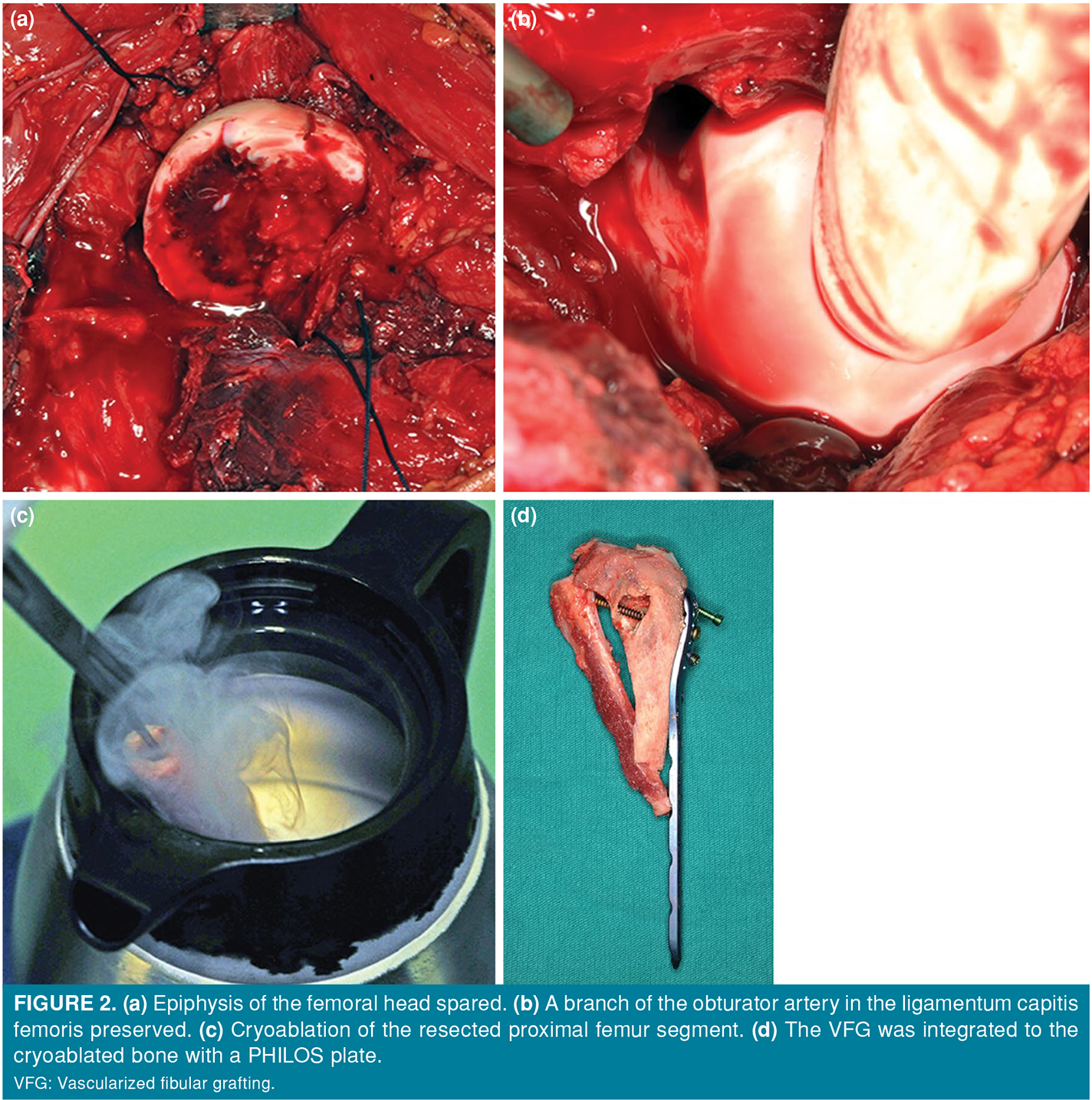 The patient had an uncomplicated stay at the ICU and was transferred to the orthopedics inpatient clinic one day postoperatively. The graft’s viability was confirmed with a single-photon emission CT scan the day after surgery. According to the pathology report, the tumor had a 90% necrosis rate and surgical margins were clear. He was discharged with a unilateral hip spica cast (Figure 3a).

The patient lives abroad with his family and, therefore, adherence to our routine follow-up protocol was suboptimal. He received postoperative adjuvant chemotherapy in his home country. In the outpatient visit to our clinic nine months later, the patient began bearing full weight.

Three years after surgery, the patient remained disease-free (Figure 3c), could walk without assistance, and was able to flex his left hip to 145° (Figure 4). He could manage most of his daily activities without assistance and socialize with his peers. His lower extremity Musculoskeletal Tumor Society (MSTS) score was 83% (25/30). On imaging, the proximal femur remodeled well and there was complete union. The femoral shaft had mild lateral bowing, and a shortness of 2 cm. The patient did not experience any serious complications; however, the headless screw pulled out in the postoperative ninth month and it was surgically removed.

Figure 4. (a) Patient standing upright and bearing full weight three years postoperatively. (b) He is able to flex his hip to 145° and squat without assistance.
× 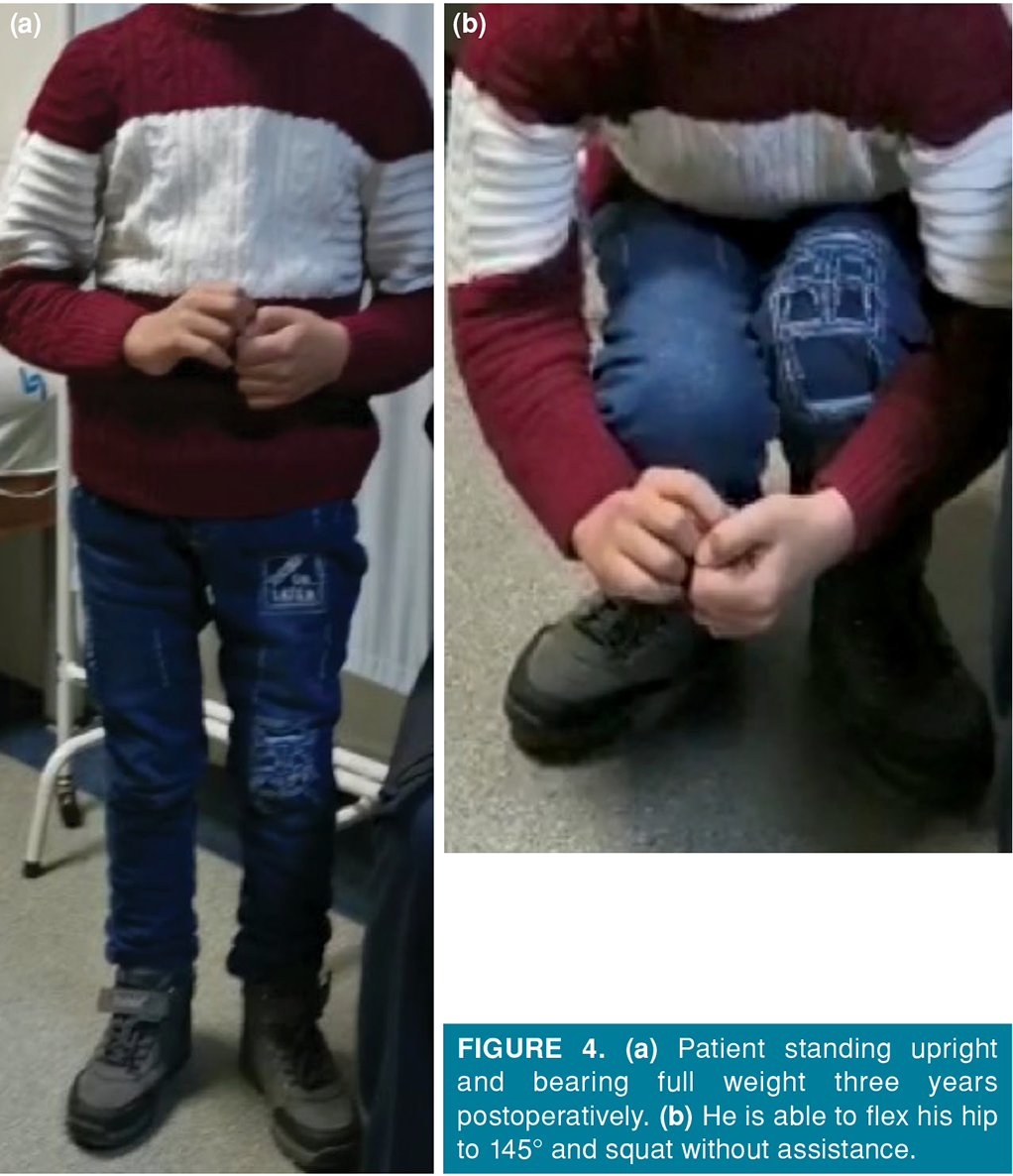 Yoshida et al.[1] proposed a classification system based on physeal involvement and recommended joint preservation with vascularized fibular grafting (VFG) for type I and II tumors. According to their study, the best functional results were achieved with VFG, compared to other methods including expandable prostheses, distraction osteogenesis, and rotationplasty. The present case was initially considered type II, but with a good response to neoadjuvant chemotherapy, the tumor dramatically shrank. By the time of surgery, it was a type I tumor with no direct contact with the physis, a good candidate for joint preserving surgery with VFG.

Reconstruction of lower extremity tumor resection with VFG alone does not provide adequate stability for early weight bearing. Petersen et al.[2] reported a case, in whom they reconstructed the proximal femur with VFG only, that presented with a fracture 13 months postoperatively. Manfirini et al.[3] reported also a case of Ewing sarcoma of the proximal femur which was also reconstructed with a vascularized fibula autograft inside an allograft bone, known as the Capanna technique.[4] However, in their case, the femoral head was replaced with the fibular head epiphysis. In a similar case by Seu et al.,[5] the femoral head was preserved and the proximal femoral defect was reconstructed using the Capanna technique with a cadaveric femoral allograft.

Bone allografts are difficult to obtain in our hospital and have the disadvantages of infection, non-union, and high costs. In a study by Houdek et al.,[6] six of the 17 patients treated with the Capanna technique resulted in non-unions at the host-allograft junction areas. Considering these factors, we opted for using the resected bone as an autograft.

Several methods including pasteurization, autoclaving, and irradiation have been described to prepare the tumor-bearing bone for autograft usage.[7-9] Tsuchiya et al.[10] developed a method of freezing the tumor-bearing bone with LN for reconstruction with the autologous bone tissue. Bone morphogenic protein levels are better preserved in frozen autografts, compared to autoclaving and pasteurization, leading to better osteoinductive properties.[11] The process of osteointegration is presumed to take around six years, which should be always considered in the long-term follow-up of patients.[12]

A relatively high rate of fractures has been reported after reconstruction with frozen autografts. To overcome this problem and increase the stability, Moteki et al.[13] recently combined this method with a modified Masquelet procedure. However, this method has the drawbacks of requiring a second surgery, in addition to muscle atrophy and joint contractures due to delayed weight bearing. By reinforcing the frozen autograft with a VFG, and vice versa, we were able to counter the aforementioned issues regarding graft stability and were able to achieve successful bony union.

Joint replacement procedures done in early childhood are rather more difficult to manage compared to similar surgeries in adulthood. Hip arthroplasty in this patient group may pose issues, such as limb length discrepancy (LLD), dislocation, infection, and loosening.[14] Minimal and non-invasive expandable endoprostheses have been developed to counter LLD.[15] Although there are few reports of custom-made expandable proximal femoral endoprostheses, the functional results so far have been good.[16] A unique complication of hip arthroplasty in early childhood is the ongoing growth of the acetabulum. This may result in a vertical acetabular cup orientation as the child ages and lead to revision surgery due to loosening, particularly in patients younger than 10 years of age.[14] Recently, a large study involving the long-term follow-up of 124 expandable endoprostheses has been published.[17] According to the study, the patients treated with expandable endoprostheses showed good functional results; however, the complication rate including aseptic loosening (26%), structural failure (26%), and infection (13%) was found to be high.

Limb length discrepancy is a common complication in childhood lower extremity tumor resections, which is particularly high after non-intercalary biological reconstructions.[18] Patients with more than 2 cm of LLD are candidates for epiphysiodesis, whereas patients who have a discrepancy greater than 4 cm should undergo limb lengthening. Although we preserved the epiphysis and VFGs have the potential to grow as well, we still noted 2 cm of LLD. This might indicate a necessity for an epiphysiodesis of the right femur to regain the pelvic balance and improve his gait.[19]

One of the concerns of hip-sparing proximal femoral resections is the arterial supply of the femoral head epiphysis, which mostly enters through the femoral head-neck junction, and the potential to develop avascular necrosis (AVN).[20] However, our case had no clinical or radiographic signs of AVN. This can be explained by the role of neovascularization between the VFG/autograft complex and the epiphyses, or by the obturator artery supplying the femoral head via the ligamentum capitis femoris. To the best of our knowledge, the mechanism which prevents AVN after such a reconstruction has not been demonstrated in the current literature.[21]

In conclusion, hip-sparing biological reconstruction is a successful method of limb preservation that obviates the need for a tumor endoprosthesis. Our method provides this with the benefits of both VFG and frozen autografts having a stable construct with a strong vascular support and growth potential.