Congenital radioulnar synostosis, a rare congenital malformation,[1] was first described by Sandifort[2] in 1793. Approximately 350 cases of proximal congenital radioulnar synostosis have been reported in the literature.[2,3] Toward the end of the fourth week of embryogenic development, the buds that would form the upper extremities begin to appear. At the end of the fifth week, cartilage analogs of the humerus, radius, and ulna appear. Before segmentation, these cartilage analogs+ are interconnected, and they have a common perichondrium.[2,4] In the seventh week of the embryonic life, synostosis occurs as a result of a defect in segmentation. As a result of endochondral ossification, the cartilaginous bridge ossifies or fibrous synostosis occurs. Since the fetal forearm is in the pronation at the seventh week, the same position is preserved in the next stages of development.[4,5]

Although it is present from birth, most patients are diagnosed with restricted pronation and supination in childhood between the ages of two and six years. Functionally mild cases may not be noticed until adolescence.[6] The reason for the delay in diagnosis is that infants do not need forearm rotation or shoulder and wrist motion can compensate fixed position of the forearm.[7] Most cases of congenital radioulnar synostosis reported in the literature are proximal radioulnar synostosis, and 60% have been reported to be bilateral.[2]

In this article, we report a rare case of congenital proximal and distal radioulnar synostosis with Poland syndrome.

A one-year-old male patient was admitted to our clinic with limited supination in the right forearm and agenesis of the first, second, third, and fourth fingers of the right hand. His 32-year-old mother gave birth to him at term by normal vaginal delivery. There were five miscarriages before the first live birth by the mother. There was no history of drug use by the mother during the pregnancy. His sibling was a four-year-old female and was previously operated for bilateral postaxial type B polydactyly.

On physical examination, the right forearm was in a fixed pronation position of 45 degrees. He had full active and passive elbow and wrist range of motion. He had aphalangia type symbrachydactyly; aplasia of the first, second, third, and fourth fingers of the right hand, and a rudimentary fifth finger. The right nipple was hypoplastic compared to the left nipple (Figure 1). No other pathology was found in the musculoskeletal examination. When the patient’s face was examined, no syndromic appearance suggesting clinical conditions, such as fetal alcohol syndrome or Apert syndrome, was observed. He had no accompanying cardiac, renal, or gastrointestinal anomaly except for cryptorchidism. Osseous bridging was observed in the proximal and distal metaphyseal regions between the right radius and ulna on radiography. The radial head was not yet ossified (Figure 2). The patient was consulted to the pediatric department in terms of other possible genetic disorders. The results of the cytogenetic analysis were reported to be normal (46XY). 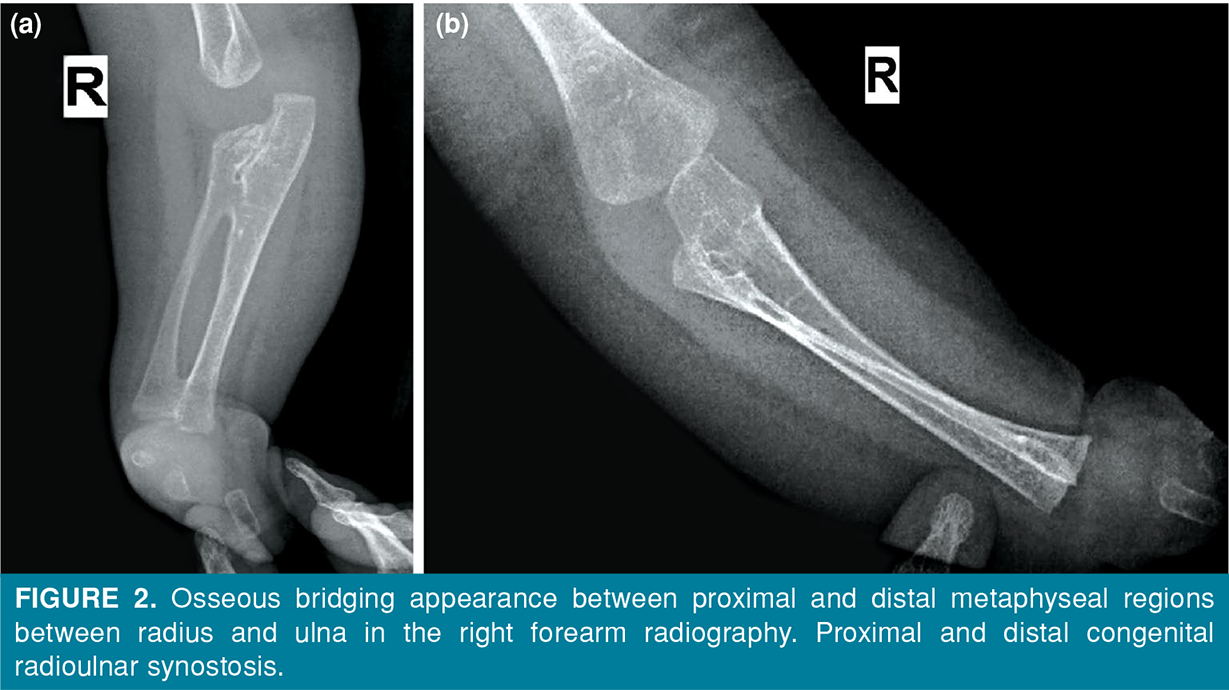 A written informed consent was obtained from the parents of the patient.

First described by Sir Alfred Poland.[8] in 1841, Poland syndrome is a rare disease characterized by aplasia or hypoplasia of the sternocostal head of the pectoralis major muscle.[9,10] It is usually accompanied by hypoplasia or aplasia of ipsilateral breast tissue, lack of subcutaneous fat tissue, and ipsilateral upper extremity anomalies. Hypoplasia in the radius and ulna, hypoplastic hand, brachycsyndactyly, finger agenesis, and radioulnar synostosis are the major skeletal deformities of the upper extremity.[11,12] Rib, sternum, and clavicle anomalies may accompany, and vertebral anomalies may be observed.[13] Dextrocardia may accompany left-sided involvement, which is due to narrowing of the left thoracic cavity.[14] In cases with a severe clinical course, involvement can be also observed in the pectoralis minor, serratus, latissimus dorsi, infraspinatus, and supraspinatus muscles.[15]

The incidence of Poland syndrome has been reported to be approximately one in 30,000 live births.[16] Fraser et al.[9] reported that the female:male ratio was 1:3, and the right side of the body was affected in 67 to 75% of cases. Although it is typically sporadic, familial cases are reported in the literature.[10] Despite the etiology of Poland syndrome remains unclear, it is thought to develop because of the decreased blood supply to the pectoralis major muscle in the embryonic period.[17]

Al-Qattan[18] published a classification of hand anomalies that accompany Poland syndrome. In type I, the hands are completely normal; however, there is an isolated pectoral anomaly. In type II, the ipsilateral hand is hypoplastic compared to the contralateral side. type III has brachysyndactyly. Some fingers are congenitally absent in type IV. Depending on the adactyly, cleft hand and clubhand deformities may accompany. type V does not have all fingers on the hand, or there are rudimentary remnants without function. In type VI, the metacarpals are rudimentary. type VII has a phocomelia-like deficiency. The patient’s right hand was diagnosed as type V according to the Al-Qattan classification.

We examined a case that presented to our clinic with hypoplasia of the right pectoral muscle mass, hypoplastic right nipple, presence of proximal and distal radioulnar synostosis in the right forearm, and accompanying finger agenesis, which suggested Poland syndrome. The thorax and vertebra were not affected. There were no concomitant cardiac, gastrointestinal, or renal anomalies.

The indication for the surgical treatment of congenital radioulnar synostosis remains unclear. In determining the treatment, functional limitations caused by the deformity in the patient should be considered. In parallel with the development of the current technology, as the use of a keyboard and mouse in most white-collar professions requires a pronation position, the final position of the forearm should be decided after the child’s interests are revealed or after the choice of profession. Surgery is considered in patients with pronation deformity of more than 60 degrees in cases of severe functional restriction of activities requiring supination.[2] Excisions (i.e., bony bridge, annular-ligament-like tissue, anterior capsule, radial head), rotational osteotomies, and interpositional grafts are surgical techniques described in the literature.[19] However, the risk of recurrence is high.[2,20] Since there was no functional hand in the case we presented, surgical treatment for radioulnar synostosis was not planned at this stage.