Objectives: The aim of this study was to evaluate correlation of post-reduction magnetic resonance imaging (MRI)-based parameters with residual acetabular dysplasia in developmental dysplasia of the hip (DDH) patients who underwent open reduction.

Developmental dysplasia of the hip (DDH) is a common disorder that requires early treatment by orthosis or open or closed reduction.[1-4] If left untreated, it causes an abnormal gait pattern, lifelong disability, and hip osteoarthritis in early adulthood.[5-8] The disease spectrum ranges from acetabular dysplasia or subluxation to dislocation.[9] After hip reduction, acetabular dysplasia may persist, and these patients would need further surgery. Ultrasonography (USG) is the gold standard for the evaluation of the concentric reduction of the hip within the first six months,[10] as it is difficult to evaluate the reduction by X-ray as the femoral head is not yet ossified.[9]

Assessment of a hip reduction after a surgical intervention is technically difficult.[11] Either USG or X-ray cannot be used after closed or open reduction due to spica casting. The concentric reduction of the hip can be evaluated easily and reliably by computed tomography (CT) after open reduction; however, it has the disadvantage of radiation exposure.[12] Recently, magnetic resonance imaging (MRI) has been used to assess hip reduction to avoid radiation exposure.[13] Chin et al.[12] concluded that MRI was an effective alternative to CT imaging with excellent sensitivity and specificity. Other previous reports described MRI measurements as useful for the evaluation of postoperative hip reduction.[14,15]

In the present study, we hypothesized that medial wall thickness had an association with residual acetabular dysplasia. We, therefore, aimed to evaluate the correlation between post-reduction MRI-based parameters and persisting acetabular dysplasia in DDH patients who underwent open reduction.

This single-center, retrospective study was conducted at Baltalimani Bone Diseases Training and Research Hospital, Department of Orthopedics and Traumatology, between January 2012 and January 2017. The medical records of the patients who were diagnosed with DDH using the International Classification of Diseases, 10th Revision codes were reviewed. Inclusion criteria were undergoing open reduction for DDH and casting at the age of 3 to 12 months. Exclusion criteria were as follows: a follow-up period of less than one year (n=2), absence of MRI evaluation on the first postoperative day (n=12), low-quality MRI scans on which measurements could not be performed (n=28), having neurological disorder or teratologic hips (n=14), and age less than two years (n=9). Of a total of 119 hips, 62 in 54 children (5 males, 57 females; mean age: 8.5±3.5 months; range, 0 to 24 months) that fulfilled the inclusion criteria were included in the study. A written informed consent was obtained from the parents and/or legal guardians of the patients before surgery. The study protocol was approved by the Health Science University, Baltalimani Bone Diseases Training and Research Hospital Review Board (09.11.2017/17). The study was conducted in accordance with the principles of the Declaration of Helsinki.

The operations were performed by four different surgeons in a single center. The medial open approach was used in all patients. The MRI scans were obtained using a 1.5 T Signa Scanner (General Electric Healthcare, WI, USA). T2-weighted turbo spin-echo hip images were used for evaluation. The MRI scans had a 3-mm slice thickness. All measurements were made using annotation tools on a light picture archiving and communications system workstation (Koninklijke Philips Electronics, Eindhoven, The Netherlands). The measurements were performed by a pediatric orthopedic surgeon with five years of experience who was blinded to the study design. 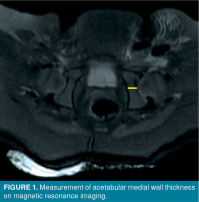 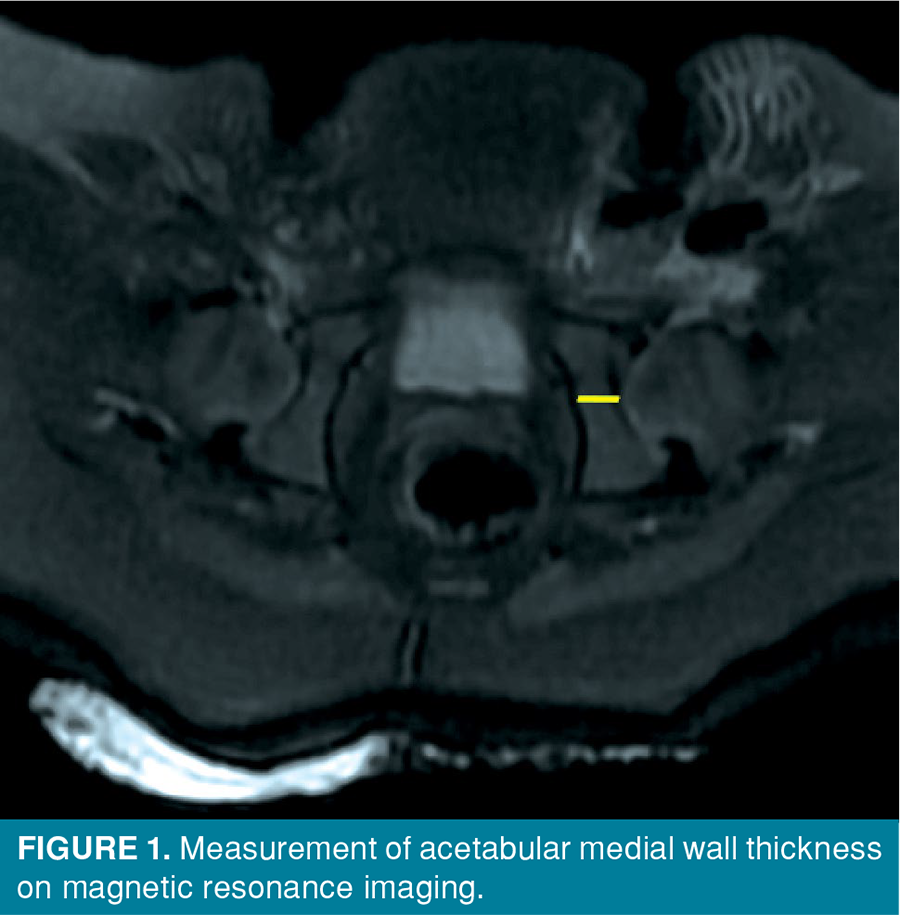 The Ludloff approach was used in medial open reduction.[1] After a 4-cm incision was made from the groin, adductor longus tenotomy was performed. It was deepened between the adductor brevis and pectineus muscles. Iliopsoas tenotomy was performed. Following capsule incision, ligamentum teres and pulvinar excision were performed. The transverse acetabular ligament was cut to achieve concentric reduction. After checking the hip stability, the skin was closed without suturing the capsule. After the procedure, a well-molded cast was applied at 90 to 100° of hip flexion.

Statistical analysis was performed using the IBM SPSS version 22.0 software (IBM Corp., Armonk, NY, USA). Descriptive data were expressed in mean ± standard deviation (SD), median (min-max) or number and frequency. The Kolmogorov–Smirnov test was used to measure the distribution of the variables. In the analysis of independent quantitative data, the Kruskal-Wallis and Mann-Whitney U tests were used. The Wilcoxon test was used to analyze dependent quantitative data. In the analysis of independent qualitative data, the chi-square test and Fisher exact test were used, when the chi-square test conditions were not met. The Spearman correlation analysis was used to examine the relation of MRI measurements with residual acetabular dysplasia. A p value of <0.05 was considered statistically significant.

Table 1. Demographic characteristics of the patients and MRI parameters
× 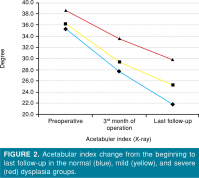 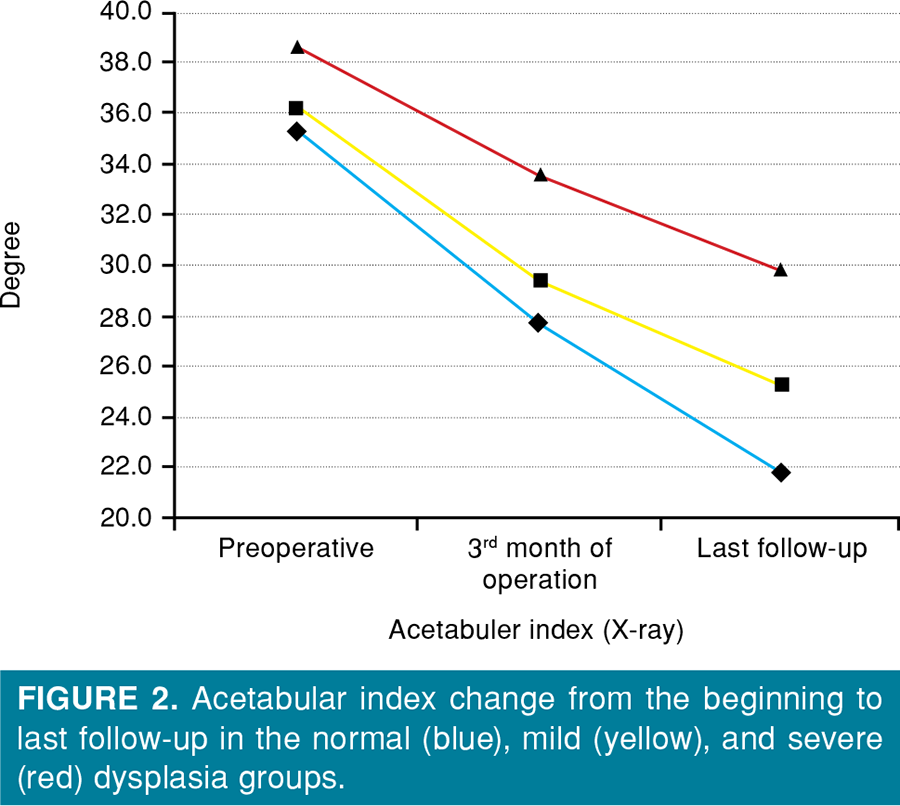 The present study attempted to investigate the correlation between postoperative MRI assessment and residual AI in DDH patients who underwent open reduction during infancy. The main finding of this study was that the last follow-up AI was positively correlated with age at the time of operation, CAI, AAI, PAI, early postoperative AI, and medial wall thickness. The last follow-up AI was negatively correlated with AHI, HCI, and sphericity. The relationship between medial wall bone stock and acetabular dysplasia has been previously investigated in an adult population.[20-22] To the best of our knowledge, this is the first study to evaluate medial wall thickness in postoperative hip reduction MRI scans during infancy. We found that the medial wall thickness was significantly higher in the mild and severe dysplasia groups than in the normal group (p=0.002). We hypothesized that, in a shallow acetabulum, the medial wall bone stock would be higher, and by remodeling, the medial wall would become thinner, and the acetabulum would become deeper. Therefore, we consider that shallow acetabula should have thicker medial walls. Our results confirm the hypothesis as these hips had a higher AI at the last follow-up.

Mitchell et al.[23] evaluated MRI parameters obtained immediately after the reduction of the hip as a predictor of long-term acetabular dysplasia. They concluded that they could not predict which hips would remain dysplastic and require pelvic osteotomy based on post-reduction MRI scans. However, they analyzed only 13 hips in their study, which is a very low number to identify the relationship between MRI measurements after reduction and residual acetabular dysplasia. In our study, we included 62 hips, and the correlation between MRI parameters and acetabular dysplasia was documented. We analyzed a higher number of patients and found that the mean age of patients with severe dysplasia was significantly higher than the other normal and mild dysplasia groups (p=0.022), unlike the study of Mitchell et al.[23] We also found that there was a positive correlation between last follow-up AI and operation age (p=0.049). This is an expected finding of the present study, as younger children have a greater remodeling capacity.[23] However, we still need to consider the p value very close to the 0.05.

In another study, Duffy et al.[15] investigated 73 hip MRI scans after closed or open reduction. However, they could not find a correlation between the appearance of the bony or cartilaginous MRI scans and the acetabular morphology at the last follow-up. However, they only had a 15-month follow-up time (range, 2 to 36 months), and they suggested that a longer follow-up time was required to show a correlation. The mean follow-up time in our study was 23.7±10.1 months, and we excluded patients with a follow-up time of less than 12 months. Our results provide valuable evidence of the correlation between patient MRI parameters and the AI at the last follow-up. Of note, we only investigated who underwent medial open reduction patients, unlike the study of Duffy et al.[15] Open and closed reduction procedures are completely different from each other, and they should be evaluated separately. Duffy et al.[15] reported significant differences between the normal and dysplastic acetabulum with respect to the PAI (p<0.001) and AAI (p<0.001). According to our results, there was a positive correlation between the PAI (r=0.590, p=0.001), and AAI (r=0.729, p=0.001). Even if this measurement confirms each other to predict secondary intervention, we need further longer-term studies.

The Tonnis classification system is widely used to evaluate the severity of persistent acetabular dysplasia.[24,25] We classified patients according to the last follow-up AI in our study. The patients who needed a cast exchange had a statistically significantly (p=0.007) higher AI at the last follow-up. It is difficult to explain how a cast exchange affects the AI, although it may not be clinically important. In the severe dysplasia group, the operation age was also higher. It may be related to a greater need for cast exchanges in the higher age group, as the operation age is clinically associated with severe acetabular dysplasia.

Nonetheless, this study has some limitations. First, the follow-up time was relatively short, and some of the mild or severe dysplasia patients are still being followed. Some of these patients would require a pelvic osteotomy at a later stage and some of them would have a normal AI as a result of a high capacity for remodeling. The patients need to be monitored up to at least five years of age. Second, osteonecrosis of the femoral head following treatment and intraoperative quality of reduction are the two important factors which directly affect the acetabular development and these factors were not taken into consideration in this study. Third, the sample size is relatively small, as we excluded patients due to artifacts or low-quality MRIs. As a result, a large number of normal children (n=40) were excluded. It is not possible to determine the extent that this changes the data or conclusions. The variables should be evaluated with multivariate analyses with a higher number of patients. Finally, this was a retrospective study and further prospective studies using high-quality MRI should be designed to provide additional evidence.

In conclusion, even if we cannot predict which patient would require pelvic osteotomy in the future, we can speculate that a trend can be seen in predicting residual dysplasia in patients treated with open reduction for DDH with these MRI parameters.