Effect of cartilage thickness mismatch in osteochondral grafting from knee to talus on articular contact pressures: A finite element analysis

Objectives: The aim of this study was to investigate the effect of cartilage thickness mismatch on tibiotalar articular contact pressure in osteochondral grafting from femoral condyles to medial talar dome using a finite element analysis (FEA).

Materials and methods: Flush-implanted osteochondral grafting was performed on the talar centromedial aspect of the dome using osteochondral plugs with two different cartilage thicknesses. One of the plugs had an equal cartilage thickness with the recipient talar cartilage and the second plug had a thicker cartilage representing a plug harvested from the knee. The ankle joint was loaded during a single-leg stance phase of gait. Tibiotalar contact pressure, frictional stress, equivalent stress (von Mises values), and deformation were analyzed.

Conclusion: Cartilage thickness mismatch does not significantly change the tibiotalar contact biomechanics, when the graft is inserted flush with the talar cartilage surface.

Among these treatment options, autologous osteochondral grafting has been shown to be safe and effective with successful clinical results in primary or revision cases.[5] This technique has various advantages. First, it is a single-stage procedure and can be performed with simple surgical equipment. Second, and most importantly, the hyaline cartilage is directly transferred to the defective area, independent of the healing capacity of the recipient site. Third, both the cartilage and the underlying subchondral and cancellous bone are simultaneously substituted, which is a critical advantage in the presence of subchondral cyst formation and bony defect.[1,4,5]

Finite element analysis (FEA) can help us to understand biomechanics better, select optimal choices, and make clinical decisions. It can be used as a powerful non-invasive tool to evaluate the biomechanical properties of prior and novel techniques and to simulate surgical procedures for clinical cases. It can be also used as an alternative to studies that expensive, require specialized devices for its implementation, and ethically sensitive animals or cadavers.[7] The FEA can potentially mimic cartilage morphology using mesh elements (tetrahedral, hexahedral), material properties (elastic, hyperelastic, poroelastic, composite), physiological loads by applying loading conditions (static, dynamic), and constitutive stress-strain equations (linear, porous-elastic, biphasic).[8]

The FEA was carried out in linear static loading conditions and assumptions of a homogeneous isotropic linear elastic material model. The non-linear contact between components of the model was also defined. Osteochondral autografting was performed on the centromedial aspect of the talar dome using osteochondral plugs with two different cartilage thicknesses. Since OLTs are most frequently seen in the centromedial region,[17] this area was chosen for simulations. One of the plugs had an equal cartilage thickness with the recipient talar cartilage and the second plug had a thicker cartilage representing a plug harvested from the knee. An intact tibiotalar joint and an empty socket were also simulated as control operations.

Modeling of the ankle joint and osteochondral grafting

To construct a realistic digital model, an intact ankle joint was modeled based on computed tomography (CT) data of a healthy male individual who was 184 cm in height and 98 kg in weight. The CT examination (Siemens go.Up, Siemens Healthineers AG, Munich, Germany) was performed in the supine position with a slice distance of 0.7 mm from 80 mm above the ankle joint down to the heel (130 KV, 42 mA, 334 slices). The CT examination revealed no osseous lesions and deformity. A written informed consent for the confidential use of the imaging files received from the participant. The study was conducted in accordance with the principles of the Declaration of Helsinki. The 3D Slicer version 4.10.2 (3D Slicer, BWH, MA, USA), Meshmixer version 3.5 (Autodesk, CA, USA), SolidWorks 2020 (Dassault Systèmes SolidWorks Corp., MA, USA), and ANSYS® workbench version 17.0 (ANSYS, Inc., PA, USA) were applied to model and simulate the FEA scenarios, respectively.

In the solid modeling, cortical bone, trabecular bone, and cartilage were separately created and assembled. Cartilage layer was modeled based on CT scan images and full surface contact visualization for bone-to-cartilage and cartilage-to-cartilage was ensured to obtain a non-uniform realistic cartilage thickness distribution. Average thickness values of the articular cartilage between the tibia and talus varied between 0.52 and 2.85 mm in the modeling operation. The cartilage contact surface area between the tibia and talus was measured as 1120.59 mm2. These thickness values for articular cartilage were compatible within an acceptable range with the literature reported for articular cartilage.[14,15,18-21] The solid modeling details and localization of the grafting are illustrated in Figure 2.

Figure 2. (a) Localization of plugs on talar articular surface. (b) Thickness of cartilage in plug A and B was 1.5 mm and 2.5 mm, respectively. Total height of plug was 14 mm. (c) Schematic presentation of FEA simulation scenarios. FEA: Finite element analysis.
× 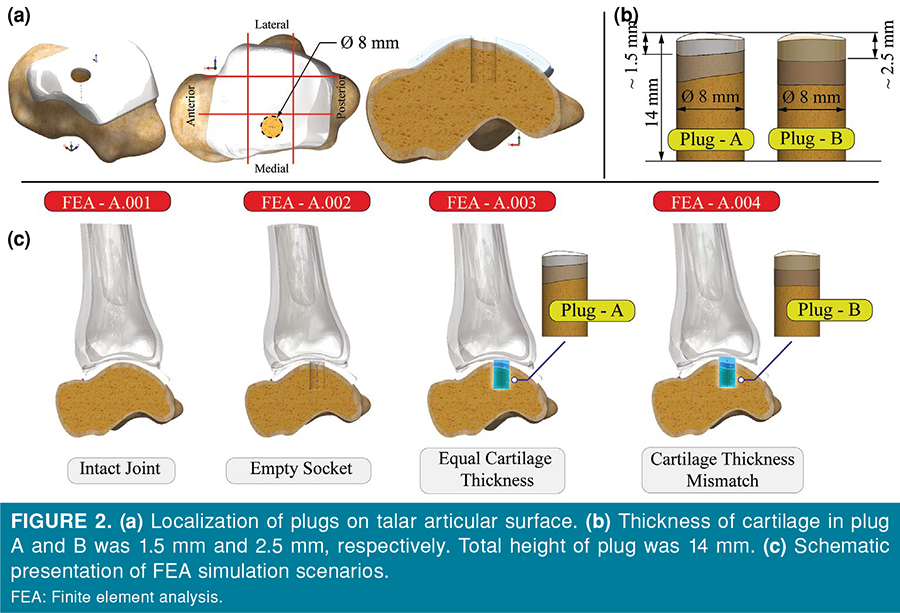 The ankle joint model was loaded in a neutral position to replicate a single-leg weight-bearing posture. The participant’s body weight (98 kg) was used as the reference value to calculate the loading magnitude. A previous biomechanical study reported that the tibial column carried 84.3% of the body weight, and the rest was carried by the fibular column.[23] The loading magnitude carried by the tibial column was calculated as 810.44 N (98 kg x 9.81 m s-2 x 0.843) (embedded gravity effect), and this was assigned in the simulations. Boundary conditions set-up in the simulation scenarios are illustrated in Figure 3. The contact definitions between components were included as the frictional contact (non-linear contact) between the osteochondral plug and the socket and tibiotalar articular cartilage surfaces. Furthermore, bonded contact definitions were defined between cortical and trabecular bone and subcortical bone (frictional coefficient: 0.46) and the articular cartilage (frictional coefficient: 0.0164).[24,25]

Figure 3. Boundary conditions. Tibial column carries 84.3% of total body weight (BW). Since the participant was 98 kg, the model was loaded with 810.4 N (B) using a compressive plate (A) on talus (C). Loading was applied as axial compression.
× 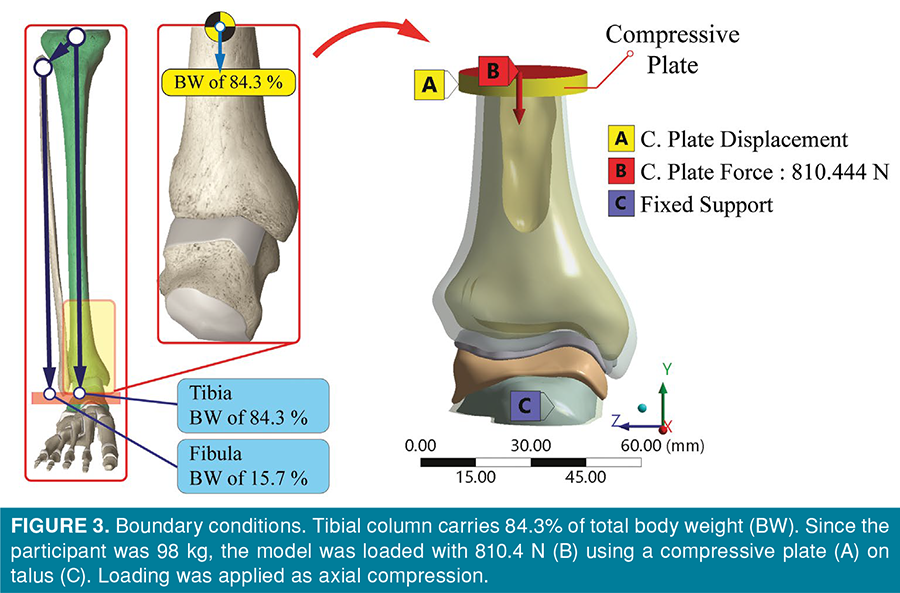 The mesh structure of the finite element (FE) has been shown to influence FEA outputs directly, and minimum criteria for model selection, proper recognition of parameters, and verification have been defined to achieve a precise performance and output.[33] To validate the current FE model for the predefined FEA scenarios, both mesh density (sensitivity) measurement and skewness metric (mesh quality) controls were performed. The mesh sensitivity analysis findings suggested a minimum element size of 1 mm for the tibial cortical and trabecular bone. Besides, for intact tibiotalar joint and osteochondral grafting models, average skewness values of 0.217 and 0.235 were obtained, respectively. The 1-mm element size and skewness values resulted in an excellent mesh quality for the FE models (total number of elements: 628570, total number of nodes: 926132). As a result, all simulation scenarios were performed using an identical curvature meshing strategy. The Dell Precision M4800 Series (Intel CoreTM i7 4910MQ CPU @ 2.90 GHz, NVIDIA Quadro K2100M-2GB, and Physical Memory: 32 GB) mobile workstation was employed as the solving platform.

Visual outputs, numerical values of the equivalent stress (von Mises values), and total tibiotalar structure deformation distributions on the components, tibiotalar articular cartilage contact pressure, frictional stress, and contact pressure between all fragments were extracted from the simulation results and presented with graphs. No statistical analysis was performed, as the measurements obtained in FEA were absolute values without any variation.

The average frictional stress between tibial and talar cartilage was similar in all tested scenarios. The summary of the results is presented in Table II. Under defined boundary conditions, no permanent deformation or damage was detected on any of the analyzed components (cortical bone, trabecular bone, and cartilage). The maximum equivalent (von Mises) stress values on each component were far less than their yield stress values (Figure 5). In case of a cartilage defect (FEA-002), the equivalent stress concentrated around the periphery of the defect on talar cartilage. On the contrary, reciprocal tibial cartilage was unloaded. In both osteochondral grafting scenarios, the equivalent stress values on tibial and talar cartilage decreased to near-normal values. 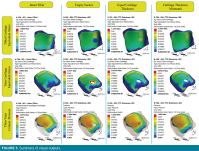 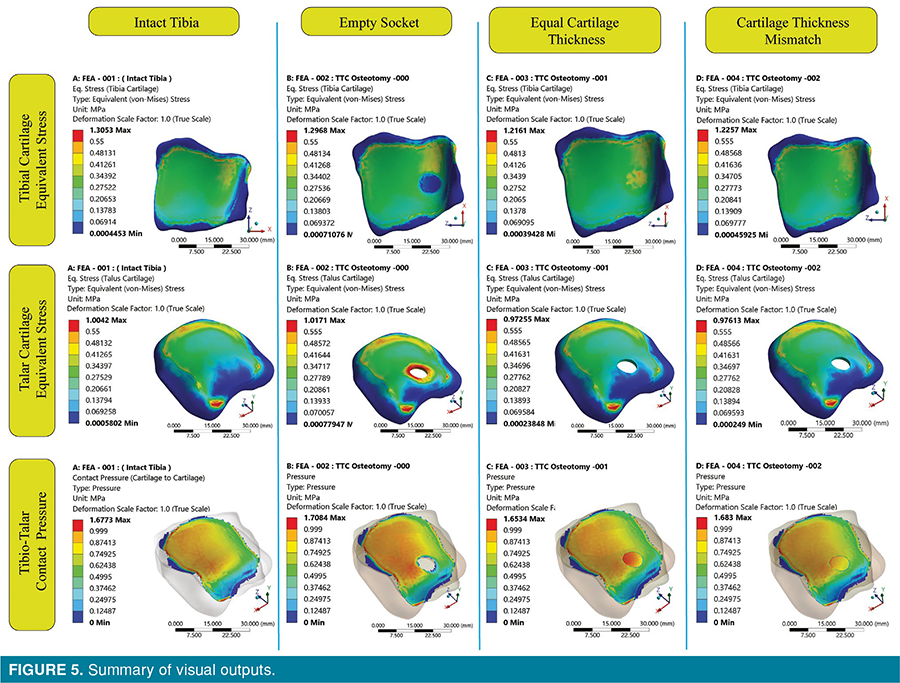 Despite a consensus on how the grafts should be placed concerning height and angle in the relevant literature, only one previous study investigated the effect of cartilage thickness mismatch. In a cadaveric study, Fansa et al.[10] created an osteochondral defect at the centromedial aspect of the talar dome, and an autologous osteochondral graft from the ipsilateral knee was attempted to place flush to the defect site. The autologous osteochondral graft was able to be placed 1.0 mm below and 0.4 mm above the surrounding tissue with varying discrepancies, and persistent deficits in contact mechanics were found, even if optimal surface congruence was provided. The authors proposed that differences in material properties (elastic modulus, stiffness) and cartilage thickness might be responsible for this discrepancy. Our findings differ from the aforementioned study. As the thickness of the cartilage increased, the pressure absorption capacity increased; thus, it did not change the joint contact pressure significantly.

Furthermore, the talar and femoral cartilage have been shown to be different in respect to morphological, biological, and biomechanical properties. Treppo et al.[36] found that the talar cartilage was denser with a higher sulfated glycosaminoglycan content, lower water content, higher equilibrium modulus, and dynamic stiffness, and lower hydraulic permeability. Henak et al.[37] showed that femoral cartilage was softer than the talar cartilage, particularly near the articular surface, and had a lower friction coefficient. The aforementioned authors suggested that these differences could cause failure following osteochondral grafting from the knee to the talus and suggested that local grafts taken from the talus itself would be a more suitable option, as they could mimic the surface geometry and the biology and biomechanical properties. Although the most frequently used donor site for harvesting osteochondral plugs is the knee joint, local grafts may be harvested from the ipsilateral anterior part of the medial or lateral facets of the talus as an alternative.[38] This approach may decrease the donor site morbidity at the knee joint, reported in around 15% of the patients. In addition, Georgiannos et al.[39] reported that talar osteochondral plugs had a similar cartilage thickness, as well as similar biological and biomechanical properties. However, topographic studies demonstrated that cartilage thickness was different between different joints and also within the same joint, which is basically related to the different exposure to load.[12,14]

Nonetheless, there are some limitations to this study. Although FEA is a valuable complementary method to understand the mechanical behavior of biological materials, it is vulnerable to various errors that may occur at each stage of the computerized analysis.[40] The simplified modeling used in this analysis may not fully reflect the complex anatomy of the ankle, including soft tissues, ligaments, and muscles. Several assumptions in defining material properties and boundary conditions were also used. Due to the FEA-specific constraints, the outputs might not have replicated real-life exactly; however, even the approximate results can provide significant information.

In conclusion, osteochondral grafts taken from the knee can be used in the repair of OLT without changing the joint biomechanics. However, harvesting the grafts perpendicular to the donor area and flush and perpendicular placement to the recipient area are two critical factors to obtain near-normal joint contact biomechanics. Further clinical studies are required to gain a better understanding of how these differences affect the functional outcomes and prognosis.