Objectives: This study aims to determine if there is an axial plane coverage insufficiency in patients with symptomatic labral tears compared to the contralateral asymptomatic side and healthy control subjects.

Conclusion: Posterior axial plane coverage deficiency in combination with cam deformity (increased a angle) seems to play a role in the pathogenesis of symptomatic acetabular labral tears, even creating a side-to-side difference in some individuals.

Femoroacetabular impingement (FAI) leads to a disruption of the chondrolabral junction and/or labral tears with two main mechanisms; cam type impingement on the aspherical femoral head-neck junction abutting against the acetabulum or pincer type with excessive acetabular coverage, leading to labral tears or fraying. Both may be a common reason for early-onset hip osteoarthritis.[1-3] However, such anatomical findings are also reported to be relevant among asymptomatic people, or the contralateral asymptomatic side might have similar findings on radiographs compared to the symptomatic side in patients with the impingement.[4-6]

This retrospective study was conducted at Dokuz Eylül University Faculty of Medicine Hospital between December 2017 and January 2019. Thirty patients (21 males, 9 females; mean age 28 years; range, 20 to 36 years) operated due to unilateral symptomatic acetabular labral tears secondary to FAI were evaluated. Unilateral hip pain was the main symptom, and anterior impingement tests were positive in this group. The labral tear was confirmed by both preoperative imaging studies (magnetic resonance imaging) and intraoperatively during hip arthroscopy. Labral repair and femoroplasty were performed. Patients having Legg-Calve- Perthes disease, slipped capital femoral epiphysis, congenital dislocation, infection, rheumatoid or other inflammatory diseases, trauma, previous hip surgery, or hip osteoarthritis or dysplasia were excluded. Sixteen of the included patients had a left-sided disease, while 14 had a right-sided disease.

The control group constituted gender- and age-matched 20 asymptomatic patients (13 males, 7 females; mean age 27±9 years; range, 19 to 36 years) for the hips and without any known connective tissue disorder, examined by radiography and computed tomography (CT) of the abdominal and/or pelvic area due to the symptoms of the abdominal area or with a suspected disease in the pelvic or abdominal region. The study protocol was approved by the Dokuz Eylül University Faculty of Medicine Ethics Committee. A written informed consent was obtained from each participant. The study was conducted in accordance with the principles of the Declaration of Helsinki.

The CT device was the same in all patients, including the control group. The median radiation dose was also similar (6 mSv) between the two groups. Patients were scanned according to standard departmental protocols at 120 kVp and 140 to 180 mAs depending on patient weight and/or girth. Patients were positioned supine and neutral rotation in both groups within the framework of standard departmental protocols. Axial CT images with 3 mm slice thickness were obtained in both groups with a GE Prospeed SX CT system (General Electric Medical Systems, Milwaukee, WI, USA). Pelvic tilt and rotation affect the radiographic analysis of the hip joint.[11-13] To eliminate this issue, we reformatted the CT images into standardized pelvic images with neutral tilt by using Sectra Workstation IDS7 V20.2.10.3376 (Sectra AB, Linköping, Sweden). Three-dimensional CT scans were used for reformatting by aligning the left and right superior iliac spines in axial view, superior portion of the right and the left iliac spines in the coronal plane, and by aligning the pubic symphysis and the anterior superior iliac spine in the sagittal plane. After reorientation, the CT scan was reformatted and the radiologic assessment was performed.[14] 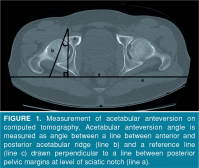 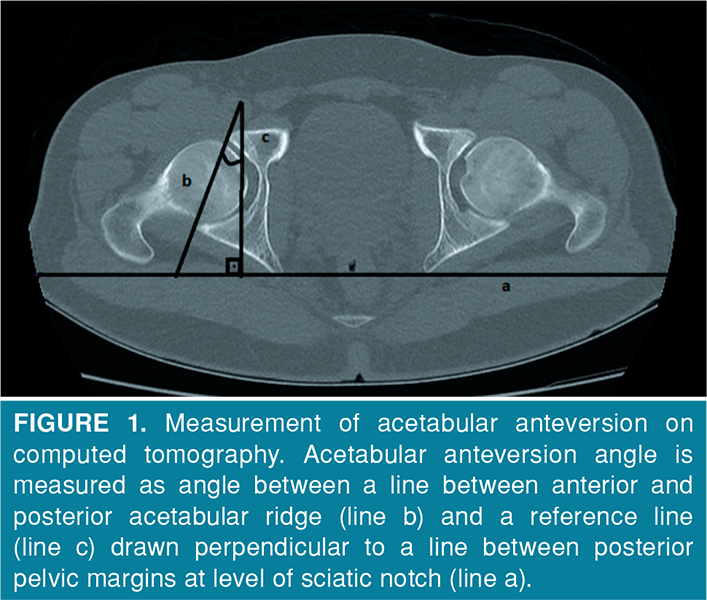 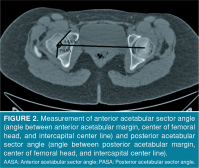 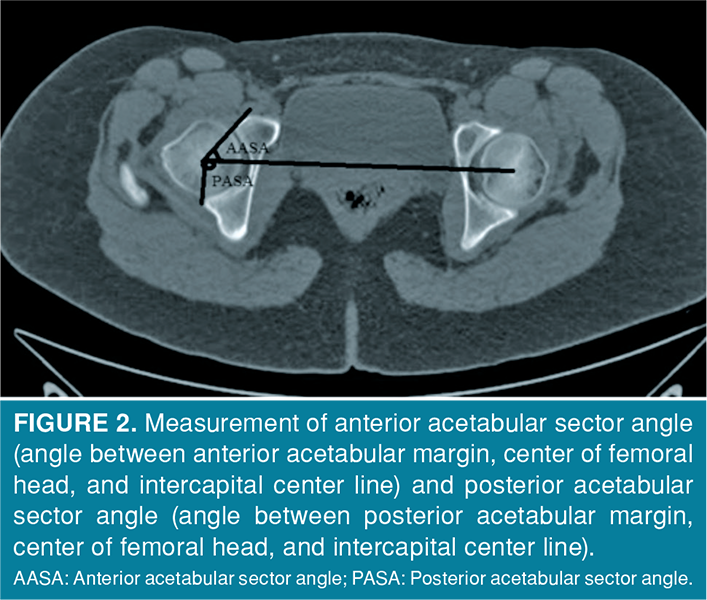 The principal finding of this study was that patients with labral tears showed posterior coverage deficiency and higher axial a angle on CT sections, compared to the control subjects, whereas this was not observed in the contralateral asymptomatic side.[19] Side-to-side comparison of the patient group yielded no difference except that the symptomatic side’s a angle tended to be higher (p=0.054).

Recently, Hingsammer et al.[10] reported that acetabular version and acetabular sector angles increase with the growth of the posterior wall. Based on this, they proposed that pincer-type impingement may not be due to overgrowth of the anterior wall but rather it may be due to insufficient growth of the posterior wall. Supporting this, Hapa et al.[9] reported axial posterior coverage insufficiency in patients with primary hip osteoarthritis where sphericity of the femoral head is conserved. The AASA and PASA values were similar to those of the present study (AASA: 67 ̊, PASA: 104 ̊). Also, similar to the present study, they reported lower PASA in osteoarthritic hips (PASA: 96 ̊), while no difference was noted for a normal asymptomatic contralateral side (PASA: 104 ̊) compared to the control group. They did not report any difference regarding total coverage (HASA), unlike the present study. This may be explained by the fact that although statistically insignificant, the AASA values were lower in the patient group, and this was contributing to the lower HASA values that were observed.

Acetabular anteversion angle was interestingly found to be higher in the patient group compared to the control group, while similar to that reported in the literature (19 ̊±4.5 ̊ and 21 ̊±5 ̊, respectively).[20,21] Fujii et al.[8] have speculated that posterior dysplasia mainly plays a role in the pathogenesis of labral tears, chondral damage, and secondary osteoarthritis development. Furthermore, they have reported that the onset of pain was seen at an earlier age in patients with acetabular retroversion than hips with anterosuperior dysplasia. Within the presence of high contact pressures at the posterosuperior parts of the acetabulum during daily activities[22] and considering the younger population in their study, posterior insufficiency might lead to increased stress concentration. Likewise, intraarticular pathologies such as labral tears may occur due to increased contact pressure with anterosuperior insufficiency.[23] At this point, we believe that studies indicating the localization of intraarticular pathologies as well as labral tears will contribute more significantly in terms of acetabular insufficiency.

In contrast to the present study and the studies mentioned above, Valera et al.[24] reported higher AASA, PASA, and HASA values in patients with grade 1 or 2 osteoarthritis and also found that higher HASA is correlated with higher CEA (>35 ̊). They explained that this difference might be attributable to the inclusion of only a younger patient group with early-stage osteoarthritis in comparison with the mean age in the study of Hapa et al.[9] Normal values of AASA and PASA have been described as approximately 63 ̊ and 103 ̊, respectively,[17,24,25] and anterior dysplasia was defined when AASA was <50 ̊ and posterior dysplasia PASA was <90 ̊.[17] No subject in the patient group of our study had obvious dysplasia according to these criteria (AASA, PASA, and HASA being 63 ̊, 100 ̊, and 162 ̊, respectively). Although the present study had a smaller sample size, it could be noted that both the patient and control groups were younger than the population of their study. So, the age of patients cannot be the only parameter about this discrepancy. Moreover, they did not consider pelvic tilt while measuring hips. The effects of pelvic tilt on hip radiological parameters might explain these differences in AASA, PASA, and HASA.

In their experimental and clinical study, Tannast et al.[13] confirmed that lateral CEA, craniocaudal acetabular coverage, and depth of acetabulum showed no alteration with any changes in pelvic orientation and also explained that these parameters are independent of individual pelvic tilt and rotation in clinical practice. Anteroposterior acetabular coverage, crossover, and posterior wall sign, and retroversion index need specific efforts to determine pelvis orientation such as computer-assisted evaluation of radiographs. Although we reformatted and reoriented pelvis in a neutral position, a standardized method that includes pelvic tilt and rotation should be enhanced in terms of optimal patient positioning in the course of getting CT images such as an inclinometer applied to pelvis or ultrasonography-assisted techniques.[26,27]

This study has some limitations. The first limitation is the data being collected retrospectively. Secondly, the sample size was smaller than compared to the literature. However, despite the smaller sample size, most of the non-significant results, such as the a angle, were congruent with previous reports. The third limitation is the degree of the labral tears not being graded. It may be more valuable if labral tear localization and degree of tears were noted in terms of high contact pressures theory and acetabular version effects. The presence of a retroverted femur seems to be a cofactor in the development of hip osteoarthritis in patients with FAI.[28] Another limitation is the absence of information about the femoral version values of the patients.

In conclusion, posterior axial plane coverage deficiency, in combination with cam deformity (increased a angle), seems to play a role in the pathogenesis of symptomatic hip labral tears and may even create a side-to-side difference in an individual. We recommend keeping horizontal plane acetabular disorders in mind and including parameters such as AASA, PASA, and HASA while evaluating patients in terms of hip preservation surgery.