Patients and methods: Between April 2020 and June 2021, a total of 50 patients (42 males, 8 females; mean age: 38.1±14.3 years; range, 18 to 60 years) who were suspected of vascular injury after gunshot or stab wounds and underwent lower extremity computed tomography angiography (CTA) from the local institutionʼs database were included in the study. The distances of the femoral neurovascular structures (FNVS) and sciatic nerve (SN) to the femur were measured in the sections determined in the anteroposterior and medial-lateral planes. The anteroposterior length of the femur was measured in selected sections to estimate the appropriate length of the proximal locking screw.

One of the most technically difficult and dangerous steps in retrograde femoral nailing is proximal locking.[6] Although freehand locking is still the most prevalent way for proximal locking,[7] several companies have developed magnetic locking devices for the proximal locking screw in their nails due to challenging situations during locking.[8,9] The proximal locking screw entry site in retrograde femoral nailing is extremely risky due to anatomical structures such as the femoral artery, vein, and nerve, as well as their branches.[6,10] Furthermore, the displacement of vascular and nerve systems as a result of trauma and associated fractures increases this risk.[11]

This single-center, retrospective study was conducted at Haseki Training and Research Hospital, Department of Orthopedics and Traumatology between April 2020 and June 2021. A total of 50 patients (42 males, 8 females; mean age: 38.1±14.3 years; range, 18 to 60 years) who were suspected of vascular injury after gunshot or stab wounds and underwent lower extremity computed tomography angiography (CTA) from the local institution's database were included in the study. Patients with lower extremity trauma, previous fracture or deformity, and peripheral vascular disease were excluded from the study.

The CTA images of the lower extremities were analyzed by two orthopedic surgeons. The slices of CTA at the level of LT, 1 cm superior of LT, and 1 cm inferior of LT were the three sections were determined in the axial plane. The distances of the femoral neurovascular structures (femoral artery, vein, and nerve) and the sciatic nerve (SN) to the femur were measured in the determining sections in the anteroposterior (AP) (y-axis) and medial-lateral (x-axis) planes (Figure 1). In addition, the AP length of the femur was measured in the selected sections to predict the appropriate length of the proximal locking screw (Figure 2). All measurements were made with reference to the LT anatomy. 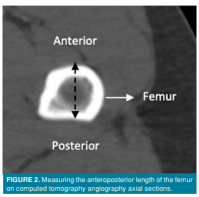 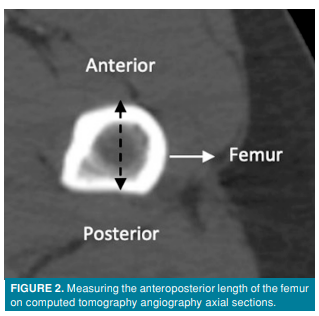 Two orthopedic surgeons who performed the measurements independently analyzed the compared images to determine the consistency of the data. The inter- and intra-observer reliability for radiographic measurements were assessed using intraclass correlation coefficients (ICC) calculated from three sets of repeat measurements on a subset of 50 radiographs, each at least one week apart for each observer. The following scores were used: ICC >0.80, excellent; 0.70-0.80, very good; 0.60-0.70, good; 0.40-0.60, fair; <0.40, poor. The ICCs for intra- and inter-observer reliability were >0.85 (range, 0.87 to 0.96) for all radiographic measurements.

Statistical analysis was performed using the IBM SPSS version 22.0 software (IBM Corp., Armonk, NY, USA). Descriptive data were expressed in mean ± standard deviation (SD), median (min-max) or number and frequency, where applicable. The Kolmogorov-Smirnov test was used to confirm the normal distribution of the variables. One-way analysis of variance (ANOVA) was used to compare the continuous variables among the three groups, and the Tukey’s multiple-comparison test was used for the post-hoc pairwise comparisons. A p value of <0.05 was considered statistically significant. 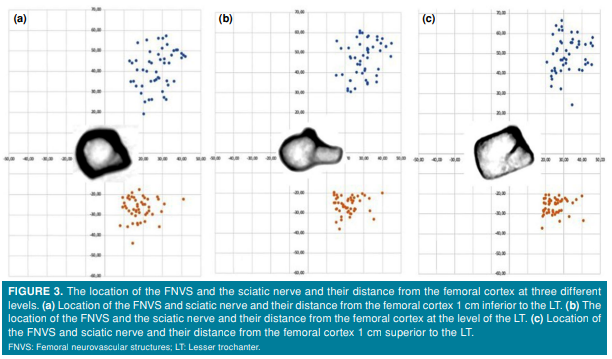 The proximal locking step is one of the most technically difficult and dangerous steps in retrograde femoral nailing. In our study, we found that the safest level close to the LT was 1 cm superior to the LT in terms of distance from the neurovascular structures, and the most dangerous level was 1 cm inferior to the LT level.[12] In addition, as a result of this study, a proximal locking screw length of 35 mm 1 cm inferior the LT and 40 mm at the LT and superior 1 cm level might be adequate for all patients.

Several studies have been published in the literature to make this process more reliable and easier.[6,13-17] In a study analyzing the level at which the nail should terminate in terms of biomechanics in retrograde femoral nailing, Tejwani et al.[13] reported that the ideal level at which the nail should end should be LT or superior to the LT. The level at which the nail ends proximally is important to prevent subtrochanteric stress fractures. Riina et al.,[6] on the other hand, compared the level of the proximal locking screw based on the distance to the neurovascular structures and reported in their cadaver study that the LT and superior were safe in terms of femoral neurovascular structures (FNVS), while 4 cm inferior to the LT was dangerous. Consistent with the literature, we found that the safest level close to the LT was 1 cm superior to the LT in terms of distance from the neurovascular structures, and the most dangerous level was 1 cm inferior to the LT level.

We found no neurovascular structure in the anterior or posterior femur in all three sections of our measurements. In this regard, although it appears to be safe in terms of neurovascular injury at all three levels, vascular damage during proximal locking screw administration is striking in many case reports, according to the literature.[13-15] To provide information about this, one reason for the vascular damage was that the drill penetrated medially over the femur and caused vascular damage. In addition, it is not only from direct penetration, but also that the drill bit encircles the muscles, creating an avulsion injury in the vessels.[16]

The main danger in injuries that occur during proximal locking screw application is that the locking is closed through a small incision and the resulting vascular injury is not noticed in the first place. In the literature, vascular damage after these injuries is noticed after low postoperative hemoglobin levels or swelling in the thigh.[15,16] In addition, when surgical procedure and trauma are considered in patients with femoral fractures, a low postoperative complete blood count brings an additional pathology to mind, causing a delay in diagnosis and unnecessary investigations. It has been reported in the literature that injuries accompanying a femoral fracture, such as acetabulum fracture, may cause displacement of neurovascular structures and, therefore, these structures may be damaged during the application of the proximal locking screw.[11]

We attempted to identify the utility of a standard length for the proximal locking screw based on the level to be used in the study. A radiological study on this subject revealed that the length of the proximal locking screw could be applied as 35 to 40 mm without the necessity to measure it during surgery.[17] Unlike this study, we established that a proximal locking screw length of 35 mm 1 cm inferior to the LT and 40 mm at the LT and superior 1 cm level may be adequate for all patients as a result of our study. The screw length can be calculated without the use of length measuring in this method. There are two advantages to this. Shortened operation time and less fluoroscopy use.

The main limitations to this study is that it has a single-center design and the majority of the patients were male.

The study protocol was approved by the University of Health Sciences, Haseki Training and Research Hospital Institutional Approval (date: 16.12.2021, no: 323). The study was conducted in accordance with the principles of the Declaration of Helsinki.