Objectives: This study presents our experience in surgical treatment of extravertebral bone hydatidosis and aims to investigate the utility of specific immunoglobulin E (IgE) in diagnosis and prognosis of the disease.

Patients and methods: Between January 1990 and December 2019, a total of 10 patients (6 males, 4 females; mean age: 47.2±14.7 years; range, 27 to 71 years) with non-vertebral bone hydatidosis surgically treated in our hospital were retrospectively included. Curettage or wide resection was performed in all cases, followed by medical antihelminthic therapy. Specific IgE p2 was studied in seven patients during and at final follow-up.

Results: At the time of diagnosis, secondary infection of the cyst was observed as the initial symptom in two patients mimicking an abscess and, in both cases, more surgeries were required without final healing. In two cases, over five specific IgE presented a false negative at the time of diagnosis and it was not correlated with clinical evolution in three cases over seven. In six cases, diagnosis was obtained before surgery. In treatment, pelvic disease had the worst prognosis (none healed) and bacterial overinfection was a common complication after surgery. At the final follow-up, only two femoral cases (20%) were free of disease. Other four cases (three in iliac bone, one in proximal femur) needed several surgeries without healing. The other four patients showed no progression or refused a new surgical treatment.

Conclusion: Location, bone defect, when it is possible to perform a radical surgery, and associated bacterial overinfection after surgery make cystic hydatidosis in bone an infection very difficult to treat definitively in humans. Negative specific IgE does not exclude bone hydatidosis.

Humans are intermediate hosts of Echinococcus granulosus (E. granulosus) producing cystic hydatidosis, this disease is acquired ingesting eggs from the feces of definitive hosts as dogs.[1] In the intestine of the intermediate host, eggs transform into oncospheres that penetrate the intestinal wall and by means of circulatory system arrives to the liver where produce hydatid cysts.[1] If oncosphere passes liver, it arrives to the lungs that work as filters, too. These are the reasons, as hydatid cysts are not frequent in another anatomical localizations.[1-3] Tamarozzi et al.[4] analyzed papers published on or after the year 2000 and found an incidence of human cystic echinococcosis (CE) rate ranging from 0 to 7.8/100,000 per year in European Mediterranean countries. Cystic CE caused 14,010 hospitalizations in Spain between 1997 and 2012 (infection of the liver represented 78.8% and infection of the lung represented 3.3%), with a decreasing trend in most of the Spanish countries, but an increase in some of them.[5] Besides, migratory movements produce the appearance of new cases.

Vertebral hydatidosis has specific considerations about treatment and complications, and were excluded from this study. Bone hydatidosis usually presents in a way that causes a difficult differential diagnosis with other pathologies. The published articles present case series from different locations and with different treatments.[6-8] Radiological images correspond to those of a lytic lesion due to the combination of cysts and reactive sclerosis. Differential diagnosis of bone hydatidosis presents as a challenge, as in most cases it mimics a bone tumor.[7] Radiographic findings of hydatidosis are rarely typical in bone and, only in some cases, computed tomography (CT) may contribute to the definitive diagnosis.[9] Hydatid bone has specific features, it does not present pericyst formation (host cells forming a reactive fibrous zone), and the parasite expands by exogenous proliferation in an irregular branching way along the line of least resistance, particularly the bony canals.[10] Bone resorption is due to pressure erosion and local necrosis caused by impairment of the blood supply.[10] Specific immunoglobulin E (IgE) has been studied as a diagnosis tool in muscular hydatidosis;[10] however most of the articles about bone hydatidosis do not show the results of specific IgE in bone hydatidosis.

In this study, we present our experience in the surgical treatment of extravertebral bone hydatidosis and aimed to investigate the utility of specific IgE in diagnosis and prognosis of the disease.

This single-center, retrospective study was conducted at Hospital Clínico “Lozano Blesa”, Department of Orthopaedic Surgery and Traumatology between January 1990 and December 2019. A total of 10 patients (6 males, 4 females; mean age: 47.2±14.7 years; range, 27 to 71 years) with non-vertebral bone hydatidosis surgically treated in our hospital were included. All cases of bone hydatidosis were operated. After diagnosis, curettage or wide resection, as the initial treatment, was performed in all cases. Antihelminthic therapy (3 cycles of albendazole 10 mg/kg/day X 28 days) was administered after surgery or when symptoms exacerbation occurred as fistula appearance. Specific IgE p2 as assessed by the enzyme-linked immunosorbent assay (ELISA) was studied in seven patients at the time of diagnosis and during follow-up. Specific IgE p2 values of <0.35 KU/L were considered negative results.

Abdominal echography, thoracic X-ray, and thoracoabdominal CT examinations were done at the time of the diagnosis.

The mean follow-up was 82.9±64.5 (range, 22 to 210) months. Cases are presented in Table I. None of the cases presented systemic symptoms. The initial symptom was pain in all cases. No one presented as a pathological fracture. In all cases, hydatid cysts appeared as lytic lesions on X-ray (Figure 1) and on CT (Figure 2). The most common localization was the iliac bone in five cases (Table I). No case was detected in small bones. Only two cases presented hydatid cysts at the liver, one of them (Case 7) four years before the bone hydatidosis diagnosis. No case presented lung localization. At the time of diagnosis, secondary infection of the cyst was observed as the initial symptom in two patients mimicking an abscess (Cases 6 and 10) (Table I) and, in both cases, more surgeries were required without final healing. In three cases (Cases 8, 9, and 10) (Table I) appeared a fistula appeared associated with bacterial overinfection, surgical fistulectomy was performed and new cycles of albendazole treatment were administered. Specific IgE was not useful to exclude bone hydatidosis in our series presenting two false-negative results (Cases 9 and 10) and it was not correlated with clinical evolution (Cases 8, 9 and 10) (Table I). In four cases (Cases 1, 6, 9, and 10), the patients were operated without a previous diagnosis of hydatid bone disease, three of them presented postoperative overinfection. 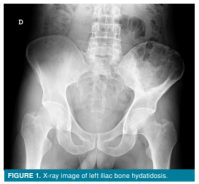 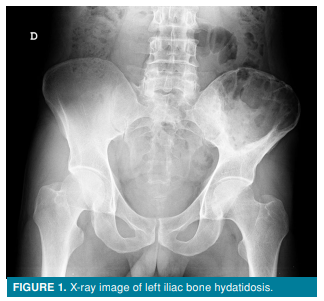 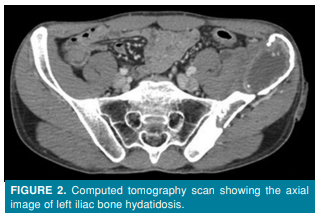 In treatment, pelvic disease due to its anatomy had the worst prognosis and none healed. Overinfection was a common complication after surgery (Cases 6, 8, 9, and 10) (Table I). At the final follow-up, only two patients (20%) were free of disease and both were femoral cases. Other three cases (two in pelvis, one in tibia) needed several surgeries without healing. The other five patients showed no progression or refused a new surgical treatment.

Cattaneo et al.[8] obtained data from seven European centers and 32 patients with a diagnosis of bone hydatidosis with a high rate of complications (84%), diagnostic approaches heterogeneous and healing in only two cases (one of them by means of amputation). In this report, cases were located in spine in 23.5%, pelvis in 19.6%, ribcage in 13%, femur in 10.9%, and humerus in 6.5%. Most of our cases affected the hip joint and pelvis (80%), and pelvic cases were the most difficult to treat in our series and none healed. Sacrum and ilium affection in two patients complicated a more radical surgery.

In cases without initial suspect of hydatidosis, we obtained the worst results: none healed after many surgeries. Other authors[6,8] of recent large series of bone hydatidosis did not present references to the specific IgE study and its correlation with the diagnosis and evolution. In our series, one case over five presented non-pathological specific IgE values before surgery; therefore, a negative specific IgE does not eliminate the possibility of hydatid diagnosis. In muscular hydatidosis, specific IgE showed false negativity in one-third of cases.[11] In our series negative specific IgE did not correlate with clinical evolution in three cases over seven. Bonifacino et al.[12] studied patients with severe bone or secondary disseminated CE and antigen-specific in vitro lymphocyte transformation assays showed a significantly lower response in patients with albendazole treatment than patients without albendazole treatment, and these values returned to normal levels in healed patients due to parasite-induced suppression of cellular responses.

In the muscle, the cysts are surrounded by a thick fibrous layer called pericyst,[11] which allows radical surgery and facilitates the healing process. The bone structure conditions the growth of the cysts, producing a bone destruction and lytic images. Bone hydatid cysts use to produce only local symptons, which favors a late diagnosis, the lytic lesions use to be too big and it makes more difficult to perform a radical surgery. Radical surgery is especially difficult in the sacrolilac location due to the vascular and neural structures.[13] The related cases of pelvic localization presented important extension of disease at the time of diagnosis. Anatomical relationship with large vessels and important nerves made radical surgery more difficult.

Due to the low frequency of bone hydatidosis, our series presents a limited number of cases. In addition, not in all cases the specific IgE levels were studied.

In conclusion, location, bone defect, when it is possible to perform a radical surgery, and bacterial overinfection after surgery make cystic hydatidosis in bone an infection very difficult to treat definitively in humans. In addition, specific IgE may have falsenegative results. Further prospective studies are needed to confirm these findings.

Cases were retrospectively reviewed, from 1990 to 2019 and did not require Ethics Committee Approval because it was not modified the treatment due to research reasons. The study was conducted in accordance with the principles of the Declaration of Helsinki.