Objectives: This study aims to identify the most accurate dorsovolar principal axis of the distal radius and carpus identified on axial computed tomography (CT) sections and to establish normative data for angular measurements among these axes.

Conclusion: The axial CT sections can be used to describe the various angulations between the normal wrist axes such as the sigmoid notch and scapholunate joint rotation angles. Despite slight differences among the four principal axes, the volar cortical and medial cortical axes are more consistent with the relatively fixed carpal axes.

The wrist is composed of numerous bones and complex joints with varying morphology and different axial orientation. The most of variations can be identified via X-ray and their respective sequences of the conventional computed tomography (CT).[1] Since an axial CT scan accurately delineates the cross-sectional anatomy of the distal radius and carpal region, it is also useful for identifying principal reference axes, which are critical in analyzing rotational anatomy. The axial plane of the CT scan is also essential to investigate the associations between certain clinical conditions and rotational/torsional malalignments in the other skeletal regions.[2,3]

The principal axes of the wrist on axial CT sections are used as a reference in the anatomical, kinematic, and clinical studies in patients with different conditions such as distal radius malunion, distal radioulnar joint (DRUJ) instability, and scapholunate ligament injury.[1,4-7] However, available data are problematic due to the different landmarks and principal axes preferred for reference. Several different anatomical locations have been used as a principal axis of the distal radius in the past; the central (mediolateral radiocarpal joint) axis, volar cortical axis (at distal metaphyseal level), and sigmoid notch axis.[5,8,9] Moreover, a comparative analysis of these axes was performed only in one study partly,[9] to the best of our knowledge.

In the present study, we aimed to identify various dorsovolar wrist axes for accurate measurements, quantify the various angular parameters between these axes, investigate the most consistent one among the four principal axes, and provide normative data for rotational angles of the DRUJ and scapholunate joint.

This single-center, retrospective, cross-sectional study was conducted at Adana City Training and Research Hospital, Department of Orthopedics and Traumatology between December 2019 and December 2021. Normal axial CT images of the wrist stored in the hospital picture archiving and communication system (PACS) were analyzed. The criteria for inclusion of the images were as follows: patient age 18 to 45 years, images taken to evaluate the wrists due to a simple fall, a suspicion of occult carpal fracture around the wrist, and presence of a follow-up examination or radiology reporting note indicating the absence of any osseous pathology. The neutral position of the wrist was defined as the dorsal part of the middle metacarpal being aligned with the dorsal part of the radius.

All images were acquired on a 128-row multidetector CT scanner (Ingenuity Core 128; Philips Medical Systems Inc., Cleveland, OH, USA). The scan parameters were as follows: tube setting 120 kV and 30 mA; gantry rotation time 0.4 sec; field of view 150 mm; scan time 8 sec; radiation dose 420 mGy-cm. The scanned segment covered the area from 5 cm proximal of the radiocarpal joint to the base of the metacarpals. The slice thickness was set at 1.4 mm and a section interval of 0.625 mm, and the table speed was set at 1 mm/sec. All CT images were made in the standard positioning of our hospital with the patient in a prone position, their shoulder overhead in maximum abduction, the elbow in full extension, forearm in pronation, and wrist and palm in contact with the gantry. The forearm and hand were stabilized by supporting pillows and Velcro straps to keep them at the center of the gantry and in the neutral flexion and deviation. The template was aligned with the longitudinal axis of the distal third of the ulna.

Two cases were excluded due to noticeable deformities related to the previous fractures, two for radiographic findings indicating osteoarthritis of the radiocarpal joint and DRUJ, and four were excluded due to insufficient wrist position (such as wrist flexed or extended) and suboptimal image quality (exams degraded by artifact or motion) of the CT images. The measurements were performed in the remaining 42 individuals (25 males, 17 females; mean age: 31±SD years; range, 18 to 45 years). The left-to-right ratio was 22:20.

Determining the radial axis (x, y, and z) is of utmost importance for reference in kinematic and anatomical studies. An anatomical and right-handed coordinate system was used for all wrists for consistent nomenclature.[10] The z-axis represents the proximal to distal direction, the x-axis radio-ulnar, and the y-axis dorsal-to-volar. In this study, we used only x and y-axes on axial sections. 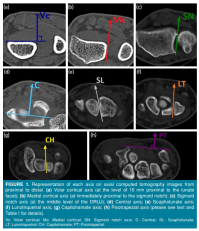 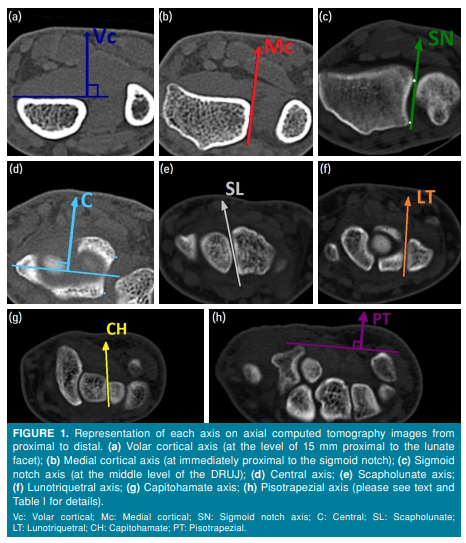 Before the measurements, each of the eight axes were marked on their respective axial images (Figure 1). Then, 22 angular parameters were measured by using these axes in each of 42 wrists. Angle direction was always set toward the volar side. The measured angle was defined as positive (+) if it was on the ulnar side with respect to the principal axis, and negative (‒) if it was on the radial side. The first measurement group included four separate measurements of the sigmoid notch version angle with respect to the four principal axes (three distal radial and one carpal axes). The second group comprised four separate measurements of the scapholunate joint rotational angle with respect to each four principal axes. The third group was created to establish normative values of the angular differences among the four principal axes. The fourth group was formed to determine the most consistent principal axis by referencing the two carpal axes, which are considered to be the relatively fixed unit of the carpus (Table I).[6,14] The criterion for the most consistent radiocarpal relationship was fulfilled, when the pair of axes to be measured were nearly collinear (the angle between ‒5° and +5°). All measurements were performed using the digital measurement tools of the MicroDicom viewer™ version 4.0.0 software (MicroDicom Ltd., Sofia, Bulgaria).

Measurements were performed in a random order by two independent observers who were blinded to both patients’ and clinical characteristics. One was a fellowship-trained hand surgeon and the other was a fourth-year resident in orthopedic surgery. Each reviewer made a single measurement. The mean of both measurements taken for each parameter was recorded as the baseline value.

Statistical analysis was performed using the IBM SPSS for Windows version 20.0 software (IBM Corp., Armonk, NY, USA). Descriptive data were expressed in mean ± standard deviation (SD), median (min-max) or number and frequency, where applicable. The Shapiro-Wilk test was used to analyze whether each group was normally distributed. Interobserver reliability was examined using the intraclass correlation coefficient with 95% confidence interval (CI). Unpaired samples t-test (for normally distributed data) and the Mann-Whitney U test (for non-normally distributed data) were used to compare values of each parameter between male and female groups. A p value of <0.05 was considered statistically significant.

Orientations of the four principal axes were ordered from radial to ulnar as follows: the volar cortical, medial cortical, pisotrapezial and central axes, with a mean of 2°, 3°, and 3° angular difference between them, respectively. In total, there was a mean of 8° difference between the volar cortical axis (the most radial) and the central axis (the most ulnar) (Figure 2). Both volar and medial cortical axes were the most consistent principal axes, being nearly collinear (between ‒5° and 5°) with the relatively fixed unit of the carpus (lunotriquetral and capitohamate joints) (Table II). Sex difference was not significant in any of the 28 measurements (Table II). Interobserver reliability was excellent for all measurements, ranging from 0.78 to 0.98. 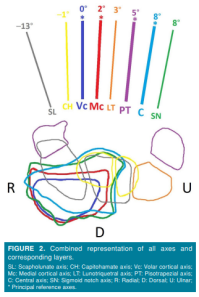 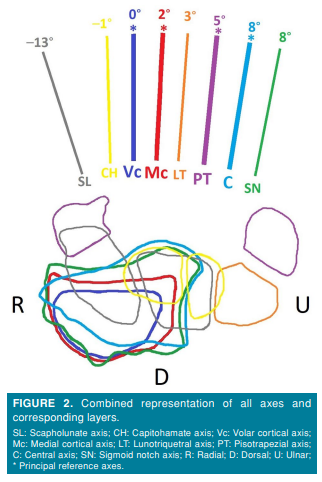 The principal axes of the wrist on axial CT sections are used as a reference in studies for following conditions: the distal radius anatomy,[1,4,8,15] rotational malalignment due to distal radius or shaft fractures,[7,9,16] anatomic and kinematic studies of the carpal region,[5,6,10] and DRUJ anatomy.[5,11,12,17-19] Several anatomical locations have been used as principal axis of the distal radius in the past, including, the central axis,[4,7-9,11,12,16] volar cortical axis at metaphyseal level,[5,8,9] and sigmoid notch axis.[5]

In the current study, a series of angular measurements based on axial CT images provided improved data for evaluating radiographic anatomy of the wrist. The main finding of the study is that there is considerable variability in the orientation among the four principal axes. In this study, the volar cortical and medial cortical axes are more consistent with the relatively fixed carpal unit than with the other principal axes.[20]

Axial morphology of the volar surface of the distal radius has been examined in several studies.[8,9,15] Based on CT scans of normal forearms, Oura et al.[8] measured the angular difference between the central axis and each of volar cortical axes at 2-mm intervals from the joint. The entire volar cortex of the distal third of the radius presents a gradual external rotational angle from proximal to distal (from 14˚ to ‒2) relative to the central axis. Recently, Daneshvar et al.[9] performed a similar study and found a mean of 3° rotational difference between such principal radial axes, at the level of 15 mm proximal to the joint. However, the difference in our series was 8°. The discrepancy can be attributed to the fact that the aforementioned study used the reconstructed three-dimensional images of the cadaveric arms from older subjects. Moreover, the volar cortex appears in three different shapes on axial CT images: concave at the epiphyseal level,[8,15] straight at metaphyseal level (particularly at 15 mm from the joint), and convex at the metaphysealdiaphyseal level. Therefore, we preferred only the section 15 mm proximal from the joint.

The pisotrapezial and medial cortical axes are novel principal axes defined for this study. The pisotrapezial axis represents the subcutaneous bony prominences of both pisiform and trapezium contacted with the table/cassette while positioning of the wrist for posteroanterior X-ray. Its orientation remains between the medial cortical and the central axes (Figure 2). During posteroanterior positioning of the wrist, a firm contact of these volar subcutaneous bones with the cassette may provide a standardized image. Although this axis is located at the carpal level, it can be used as a principal axis for axial measurements in the radiocarpal region. The medial cortical axis is the closest principal axis to the volar cortical axis with a mean of 2°.

Nevertheless, there are several limitations to this study. First, it is a retrospective, cross-sectional study. Second, due to our relatively small sample size, we were unable to deem our measured values to be representative of a population and identify ethnic variations. The final limitation is the lack of information on the intraobserver repeatability.

In conclusion, these axial descriptions represent consistent geometries between radial and carpal regions and provide a tool for understanding the comparative anatomy between them. A better understanding of normal axial anatomy of the wrist may enhance our ability to diagnose and treat wrist conditions such as DRUJ instability, scapholunate dissociation, and rotational malunions. These standardized axial measurements may be used in future studies on the distal radius, ulna, and carpal region.

The study protocol was approved by the Ethical Committee for Clinical Research, Adana City Training and Research Hospital (date: 30.05.2022, no: 1954). The study was conducted in accordance with the principles of the Declaration of Helsinki.