What is the importance of distal nail diameter in the treatment of intertrochanteric femur fractures?

Objectives: The aim of this study was to investigate the effect of distal nail diameter in the treatment of geriatric intertrochanteric femur fractures (ITFFs).

Results: There was no statistically significant difference between Group 1 and Group 2 in terms of the mean age, sex, fracture type, mean intramedullary canal diameter, reduction quality, and implant failure (p>0.05). The mean operation duration was significantly shorter in Group 2 (112.9±39.9 min) compared to Group 1 (128.8±36.4 min) (p=0.048). A total of three intraoperative peri-implant fractures occurred which included one 9 mm nail, one 12 mm nail, and one 14 mm nail.

Conclusion: Our study results suggest that there is no advantage of using a >10-mm CMN in the treatment of geriatric ITFFs in terms of reducing the implant failure rate. However, the utility of a >10-mm CMN can reduce the operation duration.

Hip fractures have become an important public health problem all over the world due to increased life expectancy. The main causes of hip fractures in the elderly are higher incidence of falls and osteoporosis. Hip fractures have many negative impacts on individuals due to their morbidity and mortality, as well as negative socioeconomic effects on society.[1,2]

Intertrochanteric femur fractures (ITFFs) constitute about 50% of hip fractures.[3] Cephalomedullary nailing (CMN) has become the primary treatment method for ITFF in many trauma centers in the past decade due to its biomechanical advantages such as allowing mobilization by weight-bearing in the early postoperative period, and being more reliable and less invasive than other surgical options.[4]

Postoperative complications such as femoral head/neck collapse, femoral shortness or varus malunion, cut-out of the lag screw from the femoral head, nonunion or implant failure may occur after CMN for ITFF.[5-7] Well-established risk factors for implant failure of CMN in the treatment of ITFF are increased tip-apex distance, unstable fractures, and inadequate reduction.[8,9] Although risk factors for implant failure have been extensively studied for CMNs in the treatment of ITFFs,[10] little focus has been given toward for the distal nail diameter.

In the present study, we aimed to investigate the effects of distal nail diameter of CMNs on implant failure in geriatric ITFFs.

This single-center, retrospective study was conducted at Karabük University Faculty of Medicine, Department of Orthopedics and Traumatology between January 2017 and January 2021. Patients who underwent surgery due to an ITFF were included. Those aged <65 years, who had pathological fractures, multiple fractures, osteosynthesis performed with an implant other than a short CMN, follow-up of <12 months, and were lost during follow-up were excluded. Finally, a total of 91 patients (34 males, 57 females; mean age: 80.6±7.8 years; range, 65 to 96 years) who met the inclusion criteria were included in the study.

Patients’ age, sex, fracture type according to Arbeitsgemeinschaft für Osteosynthesefragen (AO) classification, operation duration, the diameter of the CMN, and complications including intraoperative peri-implant fractures and postoperative implant failures were obtained from the hospital database. Postoperative reduction quality was assessed utilizing early postoperative anteroposterior (AP) and lateral hip radiographs. Patients who had displacement ≤4 mm in both AP and lateral planes were classified as excellent reduction, had ≤4 mm displacement only in one plane were classified as acceptable reduction, had >4 mm displacement in both planes were classified as poor reduction.[11] Intramedullary diameter of the femoral canal was measured 3 cm distal to trochanter minor.[12] The femoral canal fit ratio was calculated with dividing the nail diameter of the patients by intramedullary canal diameter. The distal nail diameter was decided based on the attending surgeon’s preference. The patients were allowed to give weight as tolerated immediately after surgery. Any implant-related complication ended up with a revision surgery was accepted as an implant failure. The patients were divided into two groups based on the distal nail diameter. Group 1 (n=18) included patients with a distal nail diameter of ≤10 mm and Group 2 (n=73) included patients with a distal nail diameter of >10 mm. Both groups were compared in terms of fracture type, reduction quality, operation duration, and implant failure.

Statistical analysis was performed using the IBM SPSS version 23.0 software (IBM Corp., Armonk, NY, USA). Descriptive data were expressed in mean ± standard deviation (SD) for continuous variables and in number and frequency for categorical variables. Distribution of variables was measured with the Kolmogorov-Smirnov test. Continuous variables were analyzed using the Student t-test and Mann-Whitney U test, where appropriate. Categorical variables were compared using the Pearson chi-square test. A p value of <0.05 was considered statistically significant.

Figure 1. Distribution of implant failures according to nail diameters.
× 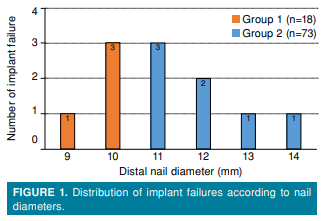 Figure 2. (a) A 74-year-old female patient with intertrochanteric femur fracture (b) treated with a 10-mm cephalomedullary nail. (c) The patient had cut-out of the implant.
× 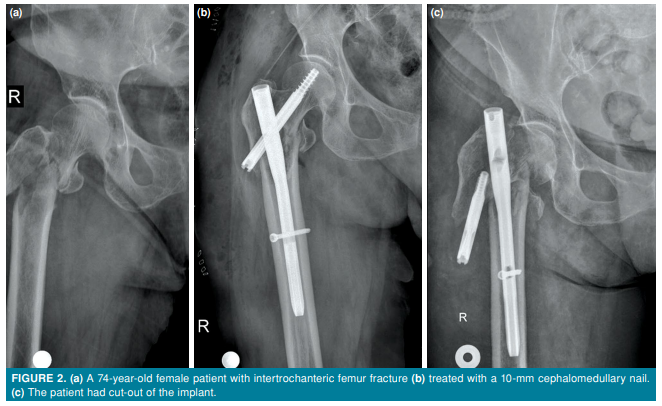 Figure 3. (a) A 78-year-old male patient with intertrochanteric femur fracture (b) treated with a 13-mm cephalomedullary nail. (c) The patient had cut-through of the implant.
× 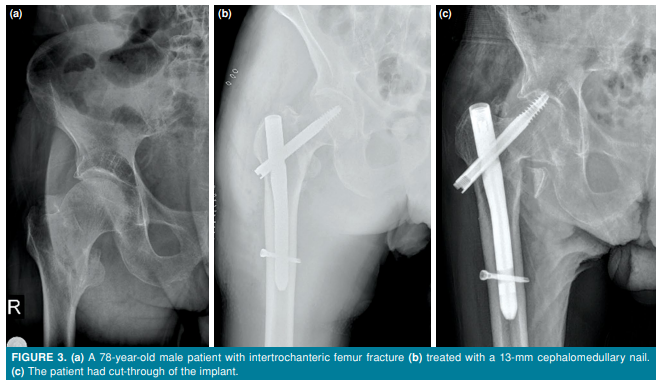 Figure 4. Distribution of distal nail diameters according to groups.
× 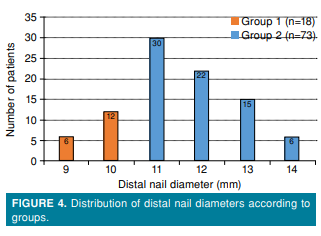 Intertrochanteric femur fractures are one of the most common injuries in the practice of orthopedics. The incidence of ITFFs fractures in the geriatric population is expected to increase with the aging population. The preferred treatment for these fractures has evolved over the time, and fixation with a CMN has now become the more widely used treatment option for stabilization.[13] Although many studies have been published regarding the utility of CMNs in the treatment of ITFFs, less is known regarding the effect of distal nail diameter in the treatment of these fractures. In this study, the use of a CMN with a distal diameter of >10 mm had no effect on implant failure rate, but could reduce operation duration.

In the design of short CMNs for the ITFFs, the proximal diameter of the nail and the diameter of the lag screw are similar, although the distal diameter of the nail may vary. The theoretical advantage of having a larger distal diameter is that it provides a tighter fit between the nail and the intramedullary canal and minimizes toggling. However, little is known about the effect of distal properties of nails on implant failure rate.[2] In this study, there was no significant difference in the implant failure rates between the groups. We may argue that increasing distal nail thickness over 10 mm does not bring an advantage, as it has been thought although the failure rates were relatively higher in Group 1, but not statistically significant. We believe that implant failures commonly depend on technical and mechanical problems.[14] Of note, CMNs with larger distal diameters can reduce the rotation of the nail within the femoral canal during surgery. This intraoperative stability potentially eliminates any undesirable rotation that requires secondary adjustments of the nail during surgery. The shorter operation duration in Group 2 may be due to this increased intraoperative stability provided by larger CMNs. However, this intraoperative stability did not reflect the overall implant stability and had no clinical benefit.

In a study by Song et al.[5] involving 122 ITFF patients, the effects of distal nail diameter on anteromedial cortical support were investigated and a significant relationship was found between the nail diameter and anteromedial cortical support. In this regard, the authors recommended the use of the largest nail possible without the need for reamerization. A biomechanical study by Marcin Ceynowa et al.[15] showed that small diameter nails in the wide medullary canal might dislocate early with insufficient distal locking, and it was concluded that long nails might be more stable. On the other hand, in a study conducted by Ma et al.[16] involving 108 ITFF patients, the authors investigated the effect of narrow proximal femoral canal diameter on reduction quality. They concluded that a narrow femoral canal diameter was a significant factor in reduction deterioration during surgery, and reduction was frequently impaired during nail placement in cases with a narrow femoral canal. As a result of the study, the authors reported that it would be appropriate to use the smallest nail possible in cases of a narrow canal. From this point of view, it can be concluded that, in the treatment of ITFFs with CMNs, it is not necessary to fill the distal canal with the largest possible nail. According to comparable failure rates between Group 1 and Group 2, we believe that a 10-mm CMN is enough to adequately treat geriatric ITFF.

Nonetheless, there are some limitations to this study. The generalizability of the study is limited, as it is a retrospective and single-center study. The patient population was relatively small that may have led to type 2 error. There were multiple attending surgeons in our institution which may have interfered with the nail diameter choice. Although we included only short CMNs, there were still different nail lengths in the short CMNs. Further randomized-controlled studies are needed to highlight the importance of nail diameter in the treatment of ITFFs.

In conclusion, our study results suggest that there is no advantage of using a ≥10-mm CMN in the treatment of geriatric ITFFs in terms of reducing the implant failure rate. However, the utility of a ≥10-mm CMN can reduce the operation duration.

The study protocol was approved by the Karabuk University Non-Invasive Clinical Research Ethics Committee (date: 15.12.2021, no: 2021/759). The study was conducted in accordance with the principles of the Declaration of Helsinki.