Comparison of helical blade versus lag screw in intertrochanteric fractures of the elderly treated with proximal femoral nail: A meta-analysis of randomized-controlled trials

Objectives: In this review, we aimed to compare the radiological and functional outcomes between the helical blade and lag screw in treating intertrochanteric fractures among the elderly and to provide suggestions for clinical treatment.

Conclusion: Both helical blades and lag screws are good choices for treating intertrochanteric fracture among elderly.

Currently, there are two surgical ways to treat intertrochanteric fractures among the elderly, including extramedullary or intramedullary fixation.[1,2] Although extramedullary fixation is the conventional treatment of intertrochanteric fractures, intramedullary fixation has become a more popular method with the development and progress of intramedullary instruments.[3] The optimal choice between the helical blade and lag screw is still controversial.[4-6] Some pieces of literature have reported that there is no difference in the clinical efficacy, excepted for the operation time that the lag screw is longer than that of the helical blade.[7] However, biomechanical studies have shown that the helical blade is superior to the conventional solid lag screw. According to the operation manual, the same length of bone tunnel as lag screw is necessary at the time of placement, resulting in more bone loss, while helical blades only need to drill through the lateral wall and tapping into femoral head directly, compassed sequentially the surrounding bone to obtain more holding force.[8-10] In recent years, complications are not only “cut-out”, but also a high “cut through” rate occurs in the helical blade. Superomedial migration of the helical blade has a higher "cut through" rate which migrate into the femoral head and hip joint than the conventional one.[11,12] However, Schwarzkopf et al.[13] found that both screws designed provided similar fixation strength for stabilization of four-part intertrochanteric fractures. A recent meta-analysis suggested that cephalomedullary implant type was not a risk factor for implant cut-out, then a tip-apex distance (TAD) of >25 mm was a reliable indicator for cut-out risk.[14] Contemporarily, Kim et al.[15] concluded that the helical blade had a higher rate of fixation failure than lag screws; therefore, surgeons should carefully utilize blade-type cephalomedullary nails while treating hip fractures.

At present, there is no consensus on the choice of two screws in clinical practice. Therefore, it is necessary to investigate whether helical blades lead to better outcomes. In this review, we aimed to compare the radiological and functional outcomes between the helical blade and lag screw in treating intertrochanteric fractures among the elderly and provide suggestions for clinical treatment.

We considered all potentially eligible studies for review, irrespective of the primary outcome or language. A manual search was also carried out using the reference lists of key articles published in English. The assessment of study quality was presented in Figure 1. The Cochrane Collaboration Risk of Bias Tool applied to evaluate the quality of the randomized-controlled trials (RCTs) can be seen in Figure 2. 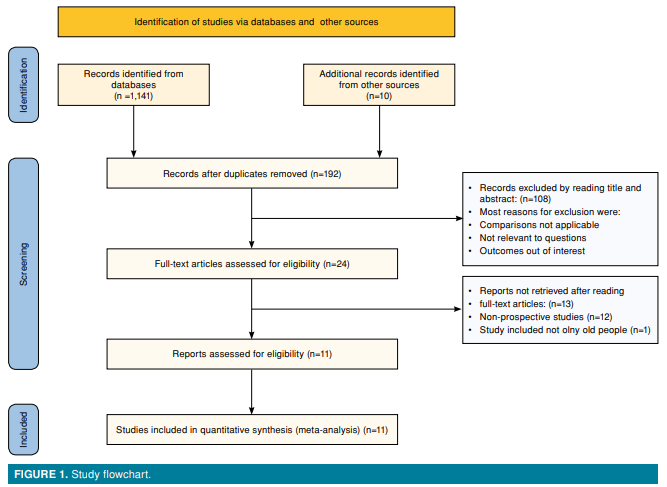 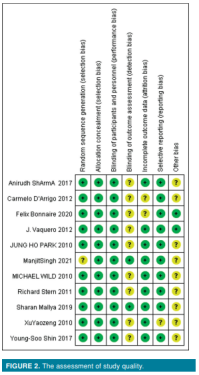 Figure 2. The assessment of study quality.
× 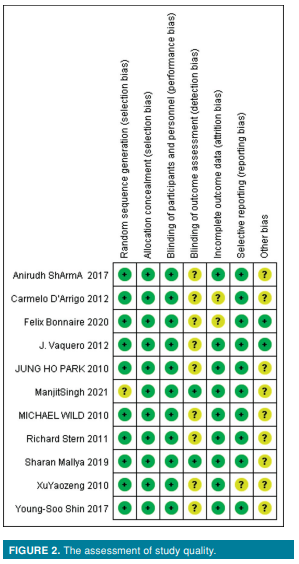 Comparator: Intramedullary fixation with lag screw, but not Intertan screws.

Outcomes: The primary outcome was the mechanical failure rates. Mechanical failure refers to an implant cut-out, cut-in, lateral migration more than 1 cm, the implant breaks, varus displacement, or complications caused by internal fixation defects. Secondary outcomes included the excellent and good rate of fracture reduction, Harris Hip Score (HHS), and postoperative hip pain. All articles which met the inclusion criteria must include the primary outcome, followed by the inclusion or exclusion of secondary outcomes.

We reviewed study titles and abstracts, and studies that satisfied the inclusion criteria retrieved for full-text assessment. Trials selected for detailed analysis and data extraction were analyzed by two investigators, and disagreements were resolved by a third investigator.

The following data were extracted into the Microsoft Excel (version 2019-v19.0, Microsoft Corp., WA, USA) from each selected study, including total number of participants, age, unstable fracture rate, mean Singh indexes, follow-up duration, type of nail, number of mechanical complications, HHS, quality of reduction, and postoperative hip pain. We assessed the effects of two types of nails on four aspects: Mechanical failure rates, HHS, excellent and good rate of fracture reduction, and postoperative hip pain. The results were analyzed using the RevMan software (Review Manager (RevMan) [computer program] version 5.4. The Cochrane Collaboration, 2020). Mechanical failure rate, the excellent and good rate of fracture reduction, and postoperative hip pain as dichotomous variables were compared using odds ratio (OR) values. A confidence interval (CI) of 95% was used. The HHS as a continuous variable was compared using mean differences. In the metaanalyses of each outcome, we pre-planned sensitivity analyses restricted to trials comparing the helical blade and lag screw in these four aspects. This comparison is the most important clinical question about the role of the helical blade.

Grading of Recommendations Assessment Development and Evaluation (GRADE) profiler (version 3.6), which is Working Group aiming at developing and disseminating a sensible approach to grading quality of evidence and strength of recommendations, was used to evaluate the level of the evidence and strength of recommendations for included outcomes. The GRADE profiler (version 3.6) was used to evaluate the evidence of included outcomes. To implement this part, the data obtained by the RevMan software analysis were imported into the GRADE profiler. Statistical heterogeneity of the included research was evaluated using the chi-square test following the P and I2 , with values greater than 50% regarded as being indicative of high heterogeneity. We used the RevMan and GRADE software for all statistical analyses.

The list of studies excluded and reasons for exclusion are shown in Figure 3, and 11 studies were included. The characteristics of included studies are shown in Table I. The quality of the RCTs was acceptable, all the RCTs reported their methods of randomization. Some of the included RCTs reported blinding of the surgeons, participants, or assessors. All of the studies provided results for a minimum of 95% among the included patients. Eleven included studies were followed for an average of 6 to 24 months.

Figure 3. The quality of the RCTs. RCTs: Randomized-controlled trials.
×

Table 1. The characteristics of included studies
×

Figure 4. The quality of the evidence in mechanical failure rates.
×

Figure 6. The quality of the evidence in reduction quality.
×

Figure 8. The quality of the evidence in Harris Hip Score.
×

Figure 10. The quality of the evidence in postoperative hip pain.
×

In all 11 studies regarding mechanical failure, there was no statistically significant difference between the two screws in terms of mechanical failure. The basic principles and procedures are the same for most internal fixation devices, only the exact technique and instrumentation vary depending upon the device used.[25] Some orthopedic surgeons believe that the key for excellent outcomes are the fracture type, general condition of the patient, and surgeon’s experience, but not the implant.[16] Bonnaire et al.[24] suggested that there was no significant difference in perioperative complications between PFNA and Gamma3, and the cut-out was a result of the screw being poorly positioned rather than implant-related. Ibrahim et al.[26] also agreed that there was no association between helical blade fixation and implant cut-out, and poorer fracture reduction was predictive of failure by cut-out. With the increasing frequency of intramedullary devices, particularly the PFNA, the literature on cut-in or “medial migration” has gradually increased. Some scholars believe that the anatomic reduction of the fracture, precise spiral blade placement, and the management of osteoporosis are the cornerstones to prevent screw incision. Hence, they proposed these factors resulting in the cut-in phenomenon and recognize that this is an atypical mode of failure different from cut-out.[27] To date, this phenomenon has been reported only in screw blades, but not in lag screws.

Proximal femoral nail antirotation has a superior performance over the proximal femoral nail (PFN) in the setting of osteoporosis, which is attributed to the compaction of cancellous bone by the helical blade.[22] However, the comparison of the resistance to pullout strength between the two types of original screws (lag screw versus helical blade) showed that the lag screw was significantly superior to the helical blade for all bone mineral densities (BMDs), while in terms of rotational strength, the helical blade was significantly superior to the lag screw, regardless of the rotation direction and the BMD.[28] On the contrary, some authors argued that the stability of the lag screw was correlated with the bone quality around the screw.[29] They measured the BMD with micro-computed tomography and found that it was higher in the center region of the femoral head than in the inferior region. Therefore, lag screws are recommended to be inserted into the center of the femoral head.[30]Although both types of implants have similar advantages, PFNA is preferred for patients with osteoporosis. Only two of the 11 included references mention the Singh indexes. Two studies were included for further classification of osteoporosis and indicated that the spiral blade group had an advantage over the lag screw group.[7,23] Park et al.[7] suggested that the helical blade produced better results in terms of social function scores, mobility scores, and complication rates with a statistically significant difference. Mallya et al.[23] concluded that the helical blade group showed better results in terms of perioperative morbidity. In the current literature reports, we did not find more similar articles.

The HHS indicated no significant difference between the two groups in our review. However, there were differences in the HHS among five studies included. With the increase of age, HHS showed a downward trend. Good functional results can be obtained, when good radiological parameters are restored as reported in the literature.[23] Postoperative lateral hip pain was thought to be related to lag screw sliding distance and fracture type. More unstable fracture types and screw displacement of more than 6 mm may result in varus malreduction and iliotibial band agitation.[21] Postoperative hip pain included in this study was obtained from patients’ statements at the final follow-up; therefore, the quality of evidence is low. In our opinion, postoperative hip pain was not quantified, which could affect the synthetic result and this requires further study.

A meta-analysis on the comparison between lag screws and spiral blades concluded that fixation failure was more common with helical blades than with lag screws.[15] However, our study concluded that there was no significant difference in the rate of fixation failure between the two groups.[34] The reasons may be as follows: First, all the studies included were RCTs. Second, the comparison between PFNA and PFN was included in our inclusion criteria. Third, there are certain differences in the definition of mechanical fixation failure. Rather than completely rewriting the previous review, we took a pragmatic decision to reorder the categories of outcomes and highlight the primary outcomes.

Nonetheless, there were several limitations in the current analysis. First, the occurrence of mechanical failure often takes time to observe, and its occurrence is “all” or ”none“ relationship, the possibility of publication bias is relatively small, but we did not include the retrospective literature. Second, instead of including a single lag screw, we included the PFN, but not the Intertan screw, as the PFN was the previous generation of PFNA. The two internal fixation devices are comparable. Third, the same results in different studies were presented in different forms; thus, we cannot make full use of these results for meta-analysis. In our opinion, further refinement of grouping and contrast according to the degree of osteoporosis would be more helpful to analyze these issues more clearly.