The effect of surgical technique on cognitive function in elderly patients with hip fractures: Proximal femoral nailing versus hemiarthroplasty

Objectives: This study aims to compare the effects of hemiarthroplasty (HA) and proximal femoral nailing (PFN) on postoperative cognitive function in elderly adults with hip fractures.

Patients and methods: Between August 2021 and January 2022, a total of 49 patients (28 males, 21 females; mean age: 78.1±9.4 years; range, 65 to 96 years) presented with a proximal femoral fracture were included. The patients were divided into two groups based on the type of surgical technique used. Group 1 consisted of 23 patients who underwent cemented HA, while Group 2 consisted of 26 patients who underwent osteosynthesis with a PFN. Preoperatively (24 h before surgery), within the first week (Days 4 to 7), and at one month following surgery, the MiniMental State Examination (MMSE) was applied.

Results: The surgery side and duration of surgery were not significantly different between the two groups (p>0.05); however, the length of hospital stay and estimated blood loss were significantly different (p<0.001) in favor of Group 2. When the decline in MMSE scores from preoperative to postoperative was assessed, it was shown that group 2 had a lesser decrease.

Hip fractures are as common as 100 to 500/100,000 individuals in the elderly population, resulting in increased mortality and morbidity following the fractures and their treatments.[1-3] For the patients over the age of 65 years, intracapsular fractures like femoral head and neck fractures are commonly treated with hemiarthroplasty (HA), and extracapsular fractures such as trochanteric fractures with proximal femoral nailing (PFN).[4,5] Open reduction and internal fixation for femoral head and neck fractures are preferred for non-displaced stable fractures in younger population. For trochanteric fractures, with the development of new generation PFNs, and studies showing more favorable results in terms of functional results, operative duration, blood loss, hospital stay and being less invasive, PFN has become a more widely adopted technique than older techniques such as dynamic hip screw (DHS) systems.[6]

In the literature, patients over the age of 65 years undergoing non-cardiac surgeries have been reported to experience a decline in postoperative cognitive functions.[7] One of these surgical procedures is the treatment of a hip fractures.[7,8] Although cognitive functions are expected to decrease after hip fractures, it has also been shown to be associated with negative outcomes such as pressure sores and death in the preand postoperative periods.[9,10] Conditions affecting cognitive function may be associated with age, blood loss, the duration of the operation/anesthesia, preand postoperative immobilization, and underlying cognitive impairment.[11,12] The Mini-Mental State Examination (MMSE) is a validated and extensively used screening tool for detecting cognitive problems in the elderly.[13]

This prospective study was conducted at Haseki Training and Research Hospital Department of Orthopedics and Traumatology between August 2021 and January 2022. A total of 64 patients over the age of 65 presented with a proximal femoral fracture were included. Patients who were illiterate, unconscious, unable to hear, see, or communicate verbally were excluded, as were those with a history of moderatesevere cognitive impairment, postoperative delirium, alcohol and/or sedative-hypnotic dependence, psychosis, or any other psychiatric condition, history of cerebrovascular disease, and chronic obstructive pulmonary disease. 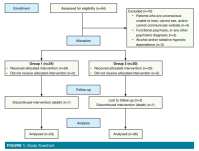 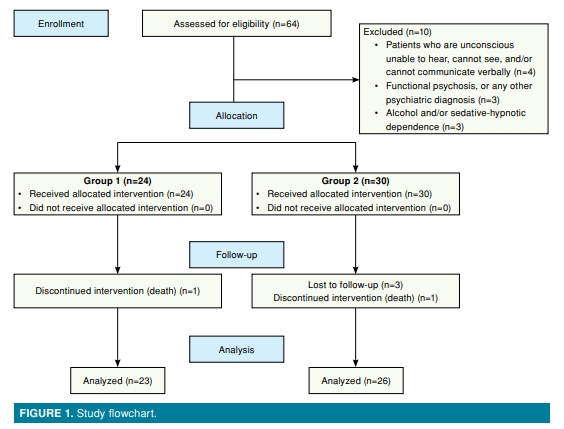 Spinal anesthesia was applied to all patients. All operations were performed by a single surgical team. All patients were given low-molecular-weight heparin for four weeks for thromboprophylaxis. In the preoperative period, the patients were able to walk independently without using assistive devices and perform their daily activities. All patients were mobilized with the help of health personnel within 48 h after surgery.

All patients completed the MMSE, which was chosen by a team member who was blind to the group allocation to represent cognitive domains. Preoperatively (24 h before surgery), within the first week (Days 4 to 7), and first month following surgery, the MMSE was assessed. The tests were done in quiet rooms. Additionally, each patient was assessed for postoperative delirium on postoperative Day 1. Data including age, sex, occupation, and education status were recorded. Also, clinical variables such as comorbidities and hemoglobin level at the time of admission, intraoperative blood loss, surgical procedure time, and length of hospital stay were noted.

Statistical analysis was performed using the IBM SPSS version 22.0 software (IBM Corp., Armonk, NY, USA). Descriptive data were expressed in mean ± standard deviation (SD), median (min-max) or number and frequency, where applicable. Normal distribution was checked using the Kolmogorov-Smirnov test. In the data with normal distribution, an independent t-test was used for the comparisons between the groups, and a paired sample t-test was used for comparisons within the groups. The Wilcoxon test and MannWhitney U test were used for data that did not fit a normal distribution. The Pearson chi-square test and Fisher exact test were used to compare the categorical data. A p value of <0.05 was considered statistically significant.

According to the MMSE results, 32.7% were in the mild cognitive impairment group. While 26 (53.1%) of those included in the study were operated with PFN with osteosynthesis, 23 (46.9%) were operated with HA. Between the two groups, there were no significant differences in age, sex, body mass index, mean education years, American Society of Anesthesiologist (ASA) scores, or chronic diseases (Table I).

Table 2. Clinical characteristics of patients during and after surgery
×

Table 3. The association between patients' pre- and postoperative first-week and first-month MMSE scores
×

Although there were no patients with moderate cognitive impairment at baseline, this rate was found to be 30.8% in the PFN group and 78% in the HA group at one month, as assessed by the MMSE scores. The neurocognitive grading of the other groups for the types of surgery is given in Table IV.

The MMSE is an appropriate tool for determining the severity of cognitive impairment.[19] In this study, we employed the Turkish version of the MMSE and found a significant decrease in MMSE scores of both surgery groups at the postoperative first month.[22] Preoperatively, there was no evidence of moderate cognitive impairment; nonetheless, it was present in 30.8% of patients who underwent PFN surgery and 78.3% of patients who underwent HA surgery. These results are consistent with previous studies suggesting that hip fracture surgery may increase the risk of cognitive dysfunction.[20,21]

In elderly patients with hip fractures, Kumar et al.[23] and Ozkayin et al.[14] reported that PFN was superior to HA. Some of the reasons for this have been reported to include shorter hospital stays, shorter operating time and, thus, less anesthetic time and bleeding, less painful stimuli, and a small scar with PFN. Furthermore, Kumar et al.[23] reported that PFN treatment would be beneficial for patients' mental health, thereby improving their overall quality of life. When we compared the two groups in terms of blood loss and length of hospital stay, Group 2 had significantly less blood loss and shorter hospital stay (p<0.001). A significant decrease in MMSE scores in Group 2 compared to Group 1 can be attributed to this fact.

The main limitation of the present study is that we were unable to account for potentially impairing factors such as non-steroidal anti-inflammatory drug/opioid use, bone mineral density, and vitamin B12 levels. Additionally, we only included individuals who underwent regional anesthesia in the study, as the effect of anesthesia type on the cognitive function of hip fracture patients is highly controversial.[24-26]

In conclusion, patients with hip fractures who underwent PFN surgery experienced less postoperative cognitive impairment than those who underwent HA surgery. While this result does not aid in the selection of treatment for either type of hip fracture for which a particular method exists, it may be useful in the selection of surgical treatment for unstable intertrochanteric femur fractures for which either of these two surgical procedures is applicable.

The study protocol was approved by the Haseki Training and Research Hospital Ethics Committee (date: 08.04.2021, no: 314). The study was conducted in accordance with the principles of the Declaration of Helsinki.