Objectives: The aim of this study was to examine the characterization of tumors and tumor-like lesions located in the clavicle and to present their clinical results.

Patients and methods: Between January 2006 and December 2018, a total of 44 patients (25 males, 19 females; mean age: 36.2±21.8 years; range, 2 to 87 years) who were operated in our clinic for a clavicular lesion were included. Among 4,856 extremity tumors operated in our clinic between these years, 44 cases (0.9%) located in the clavicle were eligible. Demographic data, tumor types, location, surgical method, metastasis, survival analyzes and clinical results of these patients were reviewed retrospectively. According to the clavicle location, the patients were divided into groups according to their involvement in proximal, middle, lateral and more than one region.

Conclusion: We believe that a wide spectrum should be considered in the differential diagnosis of tumors located in the clavicle. Age is an important predictive factor for malignancy. We believe that resection should be applied without fear considering its effects on function and recurrence.

Bone tumors of the clavicle are exceedingly rare with a reported frequency of less than 1% of all bone tumors. The literature contains case reports or few case series. Therefore, even those dealing with orthopedic oncology have very little experience with clavicle tumors.[1] It is assumed that there are two reasons why clavicle tumors are rare. It has little red marrow due to poor blood supply and lack of medullary cavity.[2]

The clavicle is an unusual bone with many unique features. It acts as a bridge between the axial and appendicular skeleton and joins the shoulder girdle. The bone can be divided into three parts; medial, lateral and the shaft. It is the only bone in the long bones whose anatomical position is on the horizontal axis. It has no medullary cavity and ossifies by membranous ossification. It contains two primary ossification centers and only one secondary ossification center. It is the first ossified bone in the embryo probably at five months. During the first five years, its further development occurs in the diaphysis from intramembranous ossification. Later, the more characteristic endochondral ossification of tubular bones takes place at the acromial and sternal ends. A classic radiologically evident epiphysis appears only at the sternal end. It develops in adolescence and eventually fuses between the ages of 21 and 25 years. The acromial end usually has no epiphyseal center.[3] Surgical resection does not cause significant morbidity.[4]

Lesions that do not contain neoplasia, such as intraosseous ganglia, non-ossifying fibroma, fibrous dysplasia, osteomyelitis, and bone infarction are called tumor-like lesions and are relatively common. They are lesions that mimic bone tumors radiologically, morphologically and histologically.[5] There are epidemiological and clinical studies on tumors of rare localities in the literature,[6-8] but there is no study presenting both the epidemiology and clinical results of tumors located in the clavicle at the same time.

In the present study, we aimed to examine the characterization of tumors and tumor-like lesions located in the clavicle and to present their clinical results.

This single-center, retrospective study was conducted at Dr. Abdurrahman Yurtaslan Ankara Oncology Training and Research Hospital Department of Orthopedics and Traumatology between January 2006 and December 2018. A total of 44 patients (25 males, 19 females; mean age: 36.2±21.8 years; range, 2 to 87 years) who were operated in our clinic for a clavicular lesion were included. Among 4,856 extremity tumors operated in our clinic between these years, 44 cases (0.9%) located in the clavicle were eligible. Demographic data (age, sex), tumor types, location, surgical method, metastasis, survival analysis, and clinical results of these patients were reviewed. Lesions that were anatomically in the clavicle were evaluated. Patients who had lesions in adjacent joints, soft tissues and anatomical structures and whose records could not be reached from the archive were excluded from the study

All patients were initially examined with plain radiographs. Magnetic resonance imaging (MRI), computed tomography (CT), and whole-body bone scintigraphy were used as further examinations. All biopsies were performed by open incisional biopsy method. In patients with malignant biopsy results, thoracic CT was requested and multidisciplinary treatment was planned with oncologists. Non-surgical treatment was chosen for patients whose clavicle tumor was part of a metastatic/multifocal disease or whose life expectancy was limited.

Statistical analysis was performed using the SPSS for Windows version 25.0 software (IBM Corp., Armonk, NY, USA). Descriptive data were presented in mean ± standard deviation (SD), median (min-max), or number and frequency. The chisquare test or Fisher exact test was used to compare categorical variables. The conformity of the variables to the normal distribution was visual (histogram and probability graphs) and analytical using methods (if n≥50; Kolmogorov-Smirnov test, if n<50; Shapiro-Wilk test) examined. For the variable found to fit the normal distribution, statistical between two independent groups t-test in independent groups was used as a statistical method for significance. Overall survival was analyzed using the Kaplan-Meier test. Using the variables obtained in the study, comparisons were made with the Kaplan-Meier and Cox regression methods. A p value of <0.05 was considered statistically significant.

The mean follow-up was 65.8±29.1 (range, 24 to 120) months. An aneurysmal bone cyst was diagnosed in involvement in proximal, middle, lateral and more than one region (Figure 1). The most frequently involved site was the lateral edge of the clavicle, and the most common tumor was an aneurysmal bone cyst (Figure 2). 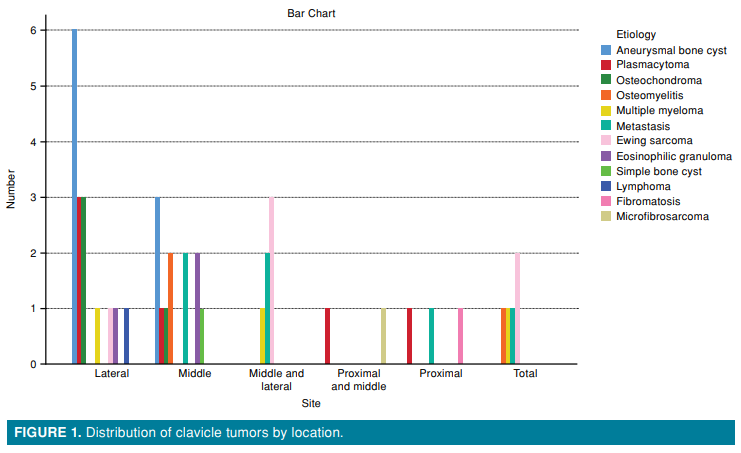 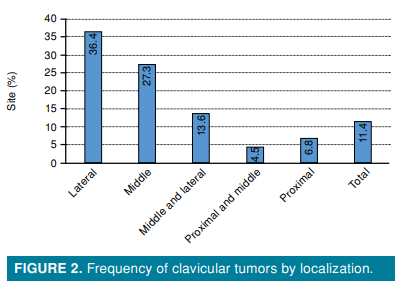 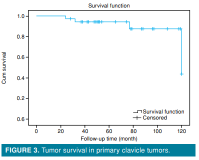 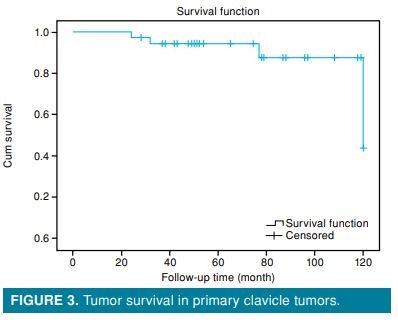 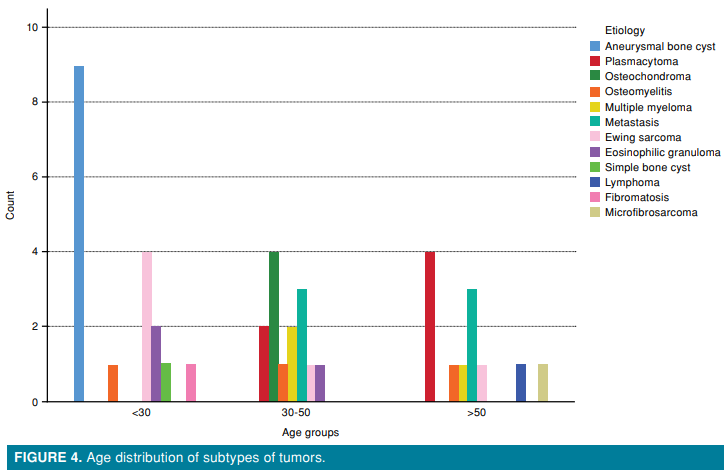 According to the World Health Organization (WHO) bone tumors classification system, we classified tumors located in the clavicle as chondrogenic, osteogenic and fibrogenic, round cell, and tumor-like (Figure 5). 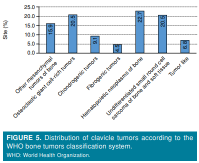 Figure 5. Distribution of clavicle tumors according to the WHO bone tumors classification system. WHO: World Health Organization.
× 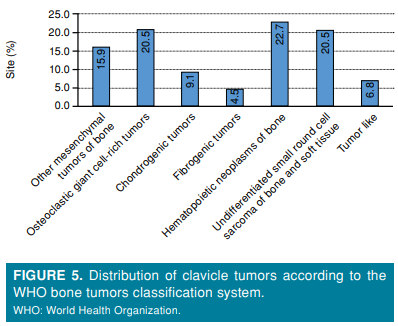 Although the clavicle is a long bone, the overall incidence and relative occurrence of clavicle tumors are similar to flat bones.[9] The main finding of this study is that age is an important predictive factor for malignancy in clavicle tumors and the functional results after claviculectomy are satisfactory.

Despite subcutaneous localization of the clavicle, needle biopsy is not recommended. The reason for this is its proximity to neurovascular structures and misdiagnosis.[9] Cundy et al.[10] presented delayed clavicle osteosarcoma due to needle biopsy and drew attention to the importance of open biopsy. In our study, all patients were diagnosed with open incisional biopsy. Although anatomically palpable, there may be delays in diagnosis, due to the insidious and asymptomatic onset.[9]

Tumors located in the clavicle can involve the entire clavicle, as well as localize to the medial (sternal end), midline or lateral (acromial end) of the clavicle. In their study, Smith et al.[11] found the most common site as the lateral part with 41%, while they found the least localized site as the middle part with 7%. Similarly, Ren et al.[12] also reported that the lateral part was the most common, and the least was the middle part. In this study, the most common location of the clavicle was the lateral part with 36.4%, while the least localization was the medial part with 6.8%. We attribute the difference in the localization, which is the least involved, compared to the literature, as we named the lesions involving both sides as a different groups. There were two (4.5%) patients with the least localization involving the medial and middle parts.

In the present study, the most common tumor in the clavicle was aneurysmal bone cyst with 20.5%. While eight patients were located at the lateral end, one patient was in the middle. While curettage grafting was applied to seven patients, distal end resection of the clavicle was performed while preserving the coracoclavicular ligament in two patients. There are case series of aneurysmal bone cysts located in the clavicle in the literature[13,14] and are consistent with the findings of our study. Kaiser et al.[13] reported that in a series of 13 cases, the most common lateral location and the most common surgical method was curettage grafting. Two patients who underwent clavicle resection also reported excellent functional outcome. Similarly, Jamshidi et al.[14] also reported that resection was a surgical option that should be applied without fear, since it reduced recurrence and had a minimal effect on functional outcome.

The most important step in choosing the surgical method in tumors located in the clavicle is to decide whether the tumor is malignant or benign. In malignant tumors, it is easier to decide in favor of a wide or radical excision of the clavicle tumor compared to other long bones, since reconstruction is not required. Kapoor et al.[15] in their study of tumors located in the clavicle confirmed that tedious procedures might not be necessary for clavicle reconstruction. Krishnan et al.[18] reported that the postoperative function of the affected extremity was normal and there was only mild pain after total claviculectomy. Wood[4] showed that most functions of the upper extremity can be preserved without clavicle reconstruction. In their study by Li et al.,[19] patients after claviculectomy had almost full range of motion pain-free without significant functional deficit. The MSTS score was 86.6% in the study by Rossi et al.[20] in which they presented the results of the tumor located in the clavicle. In the current study, the mean MSTS score of 15 (34.1%) patients who underwent clavicle resection was 79.4±6.

There are some limitations of the study. It is the inability to form homogeneous groups due to its retrospective nature and considering all tumors together.

In conclusion, we believe that a wide spectrum should be considered in the differential diagnosis of tumors located in the clavicle. Age is an important predictive factor for malignancy. We believe that resection should be applied without fear considering its effects on function and recurrence.

The study protocol was approved by the Dr. Abdurrahman Yurtaslan Ankara Oncology Training and Research Hospital Ethics Committee (no: 2021- 12/1524). The study was conducted in accordance with the principles of the Declaration of Helsinki.