Objectives: The issue of performing a hallux valgus operation with the wide-awake local anesthesia with no tourniquet (WALANT) technique has not been evaluated before. The objective of this study was to compare the clinical results of patients who underwent the WALANT technique during hallux valgus operation and patients who underwent the procedure with traditional anesthesia (TA).

Patients and methods: In this cross-sectional, retrospective study, 34 patients (17 males, 17 females; mean age: 46.1±8.3 years; range, 36 to 62 years) who underwent first metatarsal osteotomy with the diagnosis of hallux valgus disease at the orthopedics and traumatology department of the Private Silivri Anadolu Hospital between November 1, 2018, and June 1, 2020, were divided into two groups according to the surgical approach determined by patient choice: the WALANT group and the TA group. Demographic characteristics, Visual Analog Scale (VAS) scores for pain and anxiety, postoperative satisfaction levels, and complications were recorded.

The wide-awake local anesthesia with no tourniquet (WALANT) technique was defined many years ago, but it is commonly used in hand surgery and has become a routine procedure in many centers.[1,2] The most important advantage of the WALANT procedure is that it significantly reduces risks, costs, and hospital stay associated with general anesthesia and spinal anesthesia.[3,4] The importance of these advantages appear to be better understood during the COVID-19 (coronavirus disease 2019) pandemic as elective surgical procedures performed with classical methods had to be postponed in this period, and it was necessary to shorten hospital stay.[5] Since local surgical procedures were generally continued, it has become crucial to identify new methods or adapt older ones to achieve desired outcomes within current restrictions.

According to our knowledge, there are very few publications in the literature regarding the use of the WALANT procedure in lower extremity operations. In these publications, the feasibility of surgical treatment of traumatic conditions such as ankle fractures and Achilles tendon injuries with WALANT has been demonstrated; however, there is no information on the use of WALANT in conditions warranting elective surgery.[6,7]

We hypothesized that the application of the WALANT technique as the choice of anesthesia in hallux valgus, which is common and surgically threated, may be advantageous compared to traditional anesthetic methods. Consequently, this study aimed to evaluate the clinical results of patients who underwent surgery with the WALANT technique and compare findings with those who underwent traditional anesthesia (TA) for the treatment of hallux valgus.

The retrospective, cross-sectional study was conducted with 34 patients (17 males, 17 females; mean age: 46.1±8.3 years; range, 36 to 62 years) who underwent hallux valgus operation with metatarsal osteotomy at the orthopedics and traumatology department of the Private Silivri Anadolu Hospital between November 1, 2018, and June 1, 2020. All patients who underwent metatarsal osteotomy and soft tissue treatment due to hallux valgus within the specified dates were included. Patients with peripheral vascular disease, those who had diabetic ulcers or infected wounds in the tissue to be operated on, those who had undergone a previous operation in the same area, those who did not undergo metatarsal osteotomy, and those who did not provide written informed consent were excluded from the study.

For the WALANT technique, a 20 mL solution consisting of 1 mL of epinephrine (1:100,000) and 19 mL of 2% lidocaine was prepared, and then it was diluted with 20 mL of normal saline to form a 40 mL working solution. The surgery was initiated by marking the incision lines to be made for hallux valgus. Afterward, 10 mL of the prepared solution was injected into the first, second, and third intermetatarsal spaces, and digital nerves were blocked from the proximal. Initially, 0.5 mL of solution was administered while the needle was in the subcutaneous tissue, and the remaining solution was injected into the intermetatarsal space and plantar of the metatarsals by slowly advancing the needle. Then, 10 to 20 mL of solution was injected under the skin along the dorsomedial line of the first metatarsal, extending to the distal and proximal of the incision line (Figure 1). During the injections, we kept a 30-sec interval between two injections to reduce the level of pain during the second injection. The first incision was made at least 15 min after completion of injections. Before the incision was made, the efficacy of anesthesia was tested by inserting a needle over the incision. Throughout all procedures, 27G needles were used for injections. 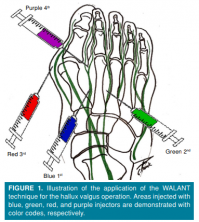 Figure 1. Illustration of the application of the WALANT technique for the hallux valgus operation. Areas injected with blue, green, red, and purple injectors are demonstrated with color codes, respectively.
× 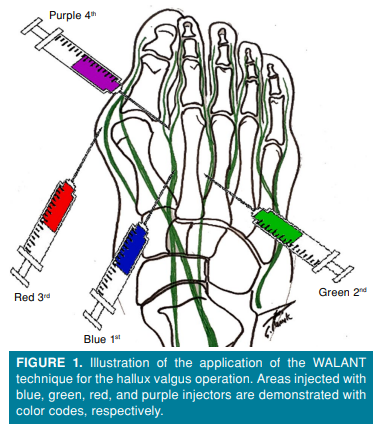 A tourniquet was not used in the group that underwent surgery with the WALANT technique. Scarf or chevron osteotomy was used for the first metatarsal correction in the patients included in the study.

The patients were followed up in the hospital for one day. All patients were postoperatively recommended to use two tablets of diclofenac sodium (total of 50 mg per day) and acetaminophen 500 mg for one week. Patients were advised to rest and elevate their operative foot for two weeks after surgery. The dressings were removed at the two-week follow-up. Follow-up visits occurred in the second week, the fourth week, the third month, and the sixth month after surgery.

Table 1. Summary of the patients’ characteristics
×

Visual Analog Scale scores were similar between the groups during operation and at postoperative 6 h (p=0.068, p=0.480, respectively). The VAS score during needle insertion was significantly higher in the WALANT group compared to the TA group (p<0.001). Conversely, the VAS-A score was significantly higher in the TA group than in the WALANT group (p<0.001). Overall, 11 (32.4%) of the osteotomies were performed via the distal chevron approach, and 23 (67.6%) were performed via scarf osteotomy. When the total costs between the groups were examined, it was seen that the average cost was 20.3% less in the WALANT group. Regarding complications, superficial infection was observed in one patient in each group. There was no significant difference between the groups in terms of postoperative satisfaction, osteotomy type, and complications (p=0.374, p=0.913 and p=0.862, respectively; Table II).

In this study, it has been shown that first metatarsal osteotomy and soft tissue procedures for hallux valgus can be performed by the WALANT technique. There was no significant difference between spinal anesthesia, one of the TA methods, and WALANT in terms of intraoperative pain, supporting that this method is applicable for hallux valgus operation. The WALANT technique was first applied in hand surgery operations, and successful results have been reported.[8-10] In recent years, it has also found use in interventions for the lower extremities.[6,7]

It has been reported in studies on hand and wrist surgery that the development of new and more local regional anesthesia methods instead of TA methods reduces the length of stay in the hospital and reduces the operating costs.[11-13] However, information on the use of WALANT in foot and ankle surgery is limited. In our study, it is demonstrated that this method can be applied safely, and the costs are reduced by 20.3% compared to spinal anesthesia.[14] It has been observed that the most important part of this cost advantage is due to the absence of preoperative laboratory tests, not using the package sets used for spinal anesthesia, and the absence of the cost for the anesthesia team. It is seen that the WALANT technique is an advantageous method, particularly in foot and ankle procedures that require limited dissection, such as hallux valgus operations.

It has been reported that the WALANT application also shortens the duration of hospital stay in the surgical margin of foot and ankle traumas.[6,7] In our study, it was observed that there was no significant change in the length of hospital stay when compared with TA. We think that this is because hallux valgus operations are performed as outpatient surgeries in many centers.[15] However, one of the prominent advantages of the WALANT technique is that there is no need for preoperative tests. This situation emerges as a more practical and easily applicable treatment protocol with the application of the WALANT technique in hallux valgus operations, which is already an outpatient surgery.

In our study, it was observed that the pain level due to the injection in the operation area was higher in patients who were operated with the WALANT technique, but patient satisfaction was higher in both anesthesia techniques. We consider this may be due to the relatively less pain sensation in the lumbar region. In addition, it was observed that patients exhibited high anxiety due to needle puncturing in the lumbar region during spinal anesthesia. There are studies showing that this level of anxiety can even cause vasovagal symptoms.[16] Compared to the WALANT technique, this seems to be a disadvantage of spinal anesthesia.

Although not using a tourniquet in the WALANT technique seems to be a disadvantage at first glance, it has been observed that adequate hemostasis can be easily achieved without using a tourniquet in surgical incisions made in hallux valgus operations. Tourniquet application has risks such as muscle injury, functional weakness, decreased muscle strength, joint stiffness, and postoperative swelling during lower extremity surgery.[19] Previous studies have shown that tourniquets are also thought to be associated with increased postoperative pain and hospital stay.[20] In a study evaluating percutaneous osteotomies for hallux valgus operation, it was reported that tourniquets were not used to prevent the development of heat necrosis.[21] In the light of this information, we think that not using a tourniquet is among the advantages of this technique.

The limitations of our study are its retrospective design and small sample size. Despite these limitations, we believe the data put forth in our study can encourage the use of WALANT in elective foot surgery, particularly in patients requiring surgery for hallux valgus disease.

In conclusion, the WALANT technique is a safe and feasible alternative in hallux valgus surgery. It provides many advantages, such as reducing anesthesia-related complications, hospital stay, and costs, not only in traumatic injuries but also in elective operations. It has been observed that adequate hemostasis can be achieved without the use of a tourniquet and that complications do not increase. Nevertheless, there is a need to reveal optimal anesthesia techniques with large prospective randomized controlled studies in the future.

The study protocol was approved by the Istanbul Medipol University Non-Invasive Clinical Research Ethics Committee (E-10840098-772.02-763 04/02/2022). The study was conducted in accordance with the principles of the Declaration of Helsinki.

The author declared no conflicts of interest with respect to the authorship and/or publication of this article.

The author received no financial support for the research and/or authorship of this article.