Objectives: This study aimed to evaluate the distribution of foot pressure with the most frequently used orthopedic shoes and demonstrate the effect of offloading philosophy on the pressure distributions of rocker bottom or heel support shoes applied unilaterally or bilaterally.

Materials and methods: Three bilateral and four unilateral, a total of seven shoe designs with sensors included in the insole were tested by the same subject in a standard acquisition protocol. Two of the unilateral and one of the bilateral shoes had heel support, while others had a rocker bottom design. A descriptive analysis was performed for each shoe and compared to a reference value obtained from a standard shoe.

Conclusion: This study showed that orthopedic shoes sold in pairs could reduce pressure on the forefoot at a comparable level to unilateral shoes. It supports their use to limit the disadvantages of single orthopedic shoes, such as limb length discrepancies.

Orthopedic shoes are mainly used for the conservative treatment of diabetic foot and following injuries or foot surgery. The goal of using orthopedic footwear is to reduce plantar pressure, particularly on the forefoot. Historically, this has involved a single shoe with the forefoot weight offloaded by the heel, with or without the support of the forefoot.[1] A more modern design has recently been marketed with pairs of offloading shoes with full, convex, rigid soles, in other words, rocker bottom soled shoes.

Foot surgery is in continuous evolution. Progress in surgical techniques of the forefoot has significantly changed the practices and goals of orthopedic footwear.[2,3] Greater understanding and the more extensive use of percutaneous or minimally invasive surgery associated with increasingly reliable osteosynthesis techniques have resulted in earlier postoperative weight bearing and early discharge from the hospital.[4,5] Although there exist numerous studies that evaluate the distribution of plantar pressure with different orthopedic shoes[1,6-13] and its role in the diabetic foot,[14,15] to our knowledge, none of them compare pairs of orthopedic footwear to other single orthopedic shoes. Sold in pairs, these shoes have the capacity to limit the limb length differences. Overcoming the leg length discrepancy might increase the comfort and speed of walking while decreasing the postoperative falling rates.[16-18] However, prescription of bilateral shoes is not a part of daily practice, probably due to economic concerns and refusal of refund by the assurance for the healthy side.3

In 2019, Dearden et al.[19] performed a prospective study and did not find any difference in the clinical and radiological progress following surgery of the forefoot between heel offloading shoes and rocker bottom shoes. However, they reported greater comfort and patient satisfaction and better stability with full rocker bottom soled shoes. A reasonable explanation may be the theoretical advantage of bilateral shoes, which may help patients adapt to a relatively new postsurgical condition.

The main goal of this study was to evaluate the distribution of foot pressure with the most frequently used orthopedic shoes and demonstrate the effect of offloading philosophy on the pressure distributions of rocker bottom or heel support shoes applied unilaterally or bilaterally. With the use of unilateral postoperative shoes, there is presumed to be a difference between the two sides in terms of elasticity of footwear, comfort, and walking patterns, although the patients wear a suitable shoe on the healthy side. We hypothesized that the reduction in plantar pressure with orthopedic footwear sold in pairs would be superior to one-sided shoes that are commercially available.

A protocol was designed for data collection. The left foot of a 25-year-old female with no past medical or surgical history was bandaged as if she had undergone forefoot surgery. The subject was 1.64 meters tall, weighed 52 kg, and wore a size 38 shoe. The reference shoe was a comfortable, standard sports shoe. When unilateral orthopedic footwear was being tested on the left foot, the reference shoe was worn on the right foot without a sock.

The subject walked 10 m in a straight line in each tested shoe; this was performed twice. The first 10 m allowed the subject to become familiar with walking in the shoe, and the second was used to register the data. Thus, the second walk constituted the data. Walking speed was natural and unguided. Recording of plantar pressure patterns was obtained with an insole (Moticon Science, Munich, Germany; Figure 1). This 3 mm insole was bilaterally placed. Walking was recorded, and an automatic video synchronization program associated the measurements of plantar pressure with the gait cycle. The amount of pressure exerted was quantitatively measured (N/cm2 ) and retranscribed to color code. The same insoles were used in all of the tested shoes. 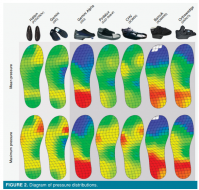 All analyses were performed using the IBM SPSS version 23.0 software (IBM Corp., Armonk, NY, USA). A descriptive analysis of the measured plantar pressure values was performed. The number of steps, walking speed in terms of strides per minute, mean forefoot pressures (N/cm2), and mean first metatarsophalangeal (MTP1) pressures (N/cm2) were measured and compared. The insole consisted of seven forefeet and six hindfeet, a total of 13 pressure sensors, and a three-dimensional acceleration sensor with an embedded ANT radio source, a thermal sensor, a flash memory, and a power supply. The S2 and S3 sensors represented the contact area of the MTP1, and the mean values of these sensors were utilized to express the corresponding parameter.

The insole was capable of wireless transfer with the capacity of providing a visual data interface (Figures 1 and 2).

All measured values of the plantar pressures are presented in Table II and Figure 2. The paired orthopedic footwear performed a similar reduction in plantar pressure to unilateral orthopedic shoes. This was against our initial hypothesis. Walking speed was similar in the tested shoes. Walking was slower in shoes with a forefoot offloading heel or a single shoe. Shoes with an offloading heel, namely Barouk secondgeneration, Gemini Alpha, and the Orthowedge, resulted in the greatest reduction in pressure of the forefoot compared to the reference shoe with 83%, 81%, and 55%, respectively. Among the shoes with a full rocker bottom sole, the Gemini shoe reduced pressure on the forefoot by 22%, which surpassed the values produced by Podalux, CHV, and Halten shoes. Figure 3 presents the reduction in forefoot pressure with each shoe.

Table 2. Results of tests according to shoe design
×

Figure 3. Percentage of offloading of the forefoot according to shoe design.
× 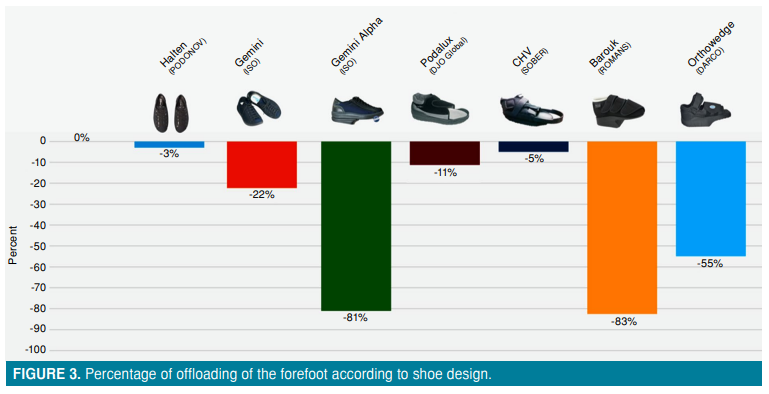 If the mean pressure values of the S2 and S3 sensors were separately evaluated, representing the pressures on the MTP1, heel offloading property of Gemini Alpha, Barouk second-generation, and the Orthowedge shoes resulted in a reduction of 82%, 80%, and 73%, respectively, compared to the reference shoe.

Figure 4. Percentage of offloading of the first and second metatarsophalangeal joints according to shoe design.
× 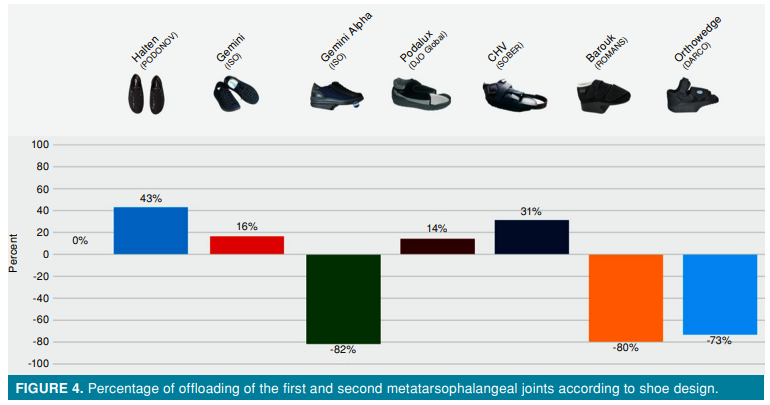 The knowledge on the characteristics of postoperative shoes continues to accumulate. As expected, orthopedic shoes sold in pairs may limit the problems of limb length discrepancies created by wearing a single orthopedic shoe.[16-18,20,21] There is also existing evidence for the use of heeled shoes, which provide significantly more forefoot offloading (between 2.5 and 4 times more depending on the design) compared to rocker bottom soles.[22] The findings of this study support the use of heel offloading shoes to acquire the highest degree of forefoot offloading, although rocker bottom shoes provided more speed in pairs.

Back and hip pain are the most frequently reported effects of the limb length discrepancies created by inequal orthopedic shoes.[18] Michalik et al.[16] compared a rocker bottom sole shoe to an offloading heel shoe and found a statistically significant difference in the oblique angle of the pelvis and the lateral deviation of the spine compared to a regular shoe. Furthermore, they found hardly any difference in gait between the two orthopedic sole designs that were evaluated. They concluded that whatever the design of the shoe, a compensating shoe on the contralateral side should be used to transfer the pressure to the lateral side of the operated heel.[16] Pairs of orthopedic shoes may not only be beneficial for proper transfer of load but also decrease falling risk in the elderly subjects caused by unbalanced shoes.[23]

In this study, heeled shoes resulted in a remarkable reduction in the MTP1 pressure in a range of 73% to 82%. On the contrary, shoes with rocker bottom soles increased the forefoot pressure. Comparable results were reported by Van Schie et al.[22] in 14 of the 17 patients evaluated by using the Darco® VFE (DARCO (Europe) GmbH, Raisting, Germany) shoe. Schuh et al.[24] evaluated the characteristics of five shoes on the market and five prototypes to a reference shoe and found similar results. They blamed the increased torsional force on the hallux due to the excessive stiffness of the soles and assumed that a combination of excessive rigidity and an exceedingly posterior rocking line could have created this paradoxical effect. They concluded that the quality of orthopedic footwear was based on a subtle balance of the rigidity of the sole, the rolling characteristics, the rocking line, and shoe comfort. Moreover, they reported a need for a proper correlation between the length and the width (length-width ratio) to ensure patient comfort. There were certain differences in the quantitative pressure values (N/cm2 ) reported in the study of Schuh et al.[24] and the results of the present study. This difference was probably due to the system of measurement and calibration.[25] The measurement system utilized in our study was validated by numerous studies.[26-28] To our knowledge, this is the first study to evaluate the distribution of plantar pressures in orthopedic shoes sold in pairs.[29]

The main limitation of this study is the evaluation of only a single healthy subject. The subject on whom the tests were performed was healthy and had no problem with her foot or limping. We did not report the measurements in the healthy foot, as this was not pertinent to our analysis. Second, the speed of walking was not guided, which has been reported to modify the plantar pressure.[30] As the assessment of walking speed is not easy in a short distance, we assumed that the speed was nearly constant for 10 m and that any variations and their influence on the pressure measurements was negligible. Finally, postoperative bandaging following foot surgery markedly varies from one surgeon to the other and may significantly modify the distribution of the plantar pressure.

In conclusion, the reduction of pressure on the forefoot was significantly greater with a forefoot offloading heel support model compared to shoes with rocker bottom soles, which conversely increased the pressure on the first metatarsophalangeal joint. Paired heel supporting models may be considered as an alternative option during the early postoperative period to obtain significant forefoot offloading and comfort.

The study protocol was approved by the IRB Elsan Ethical Committee (IRB#2021-07- LOPES-02).
Data Sharing Statement: The data that support the findings of this study are available from the corresponding author upon reasonable request.