Dynamic hip screw versus intramedullary nailing for the treatment of A1 intertrochanteric fractures: A retrospective, comparative study and cost analysis

Patients and methods: Between January 2015 and December 2019, a total of 85 patients (70 males, 15 females; mean age: 85.6±9.5 years; range, 33 to 99 years) who were treated for intertrochanteric two-part femoral fractures were retrospectively analyzed. The patients were stratified and divided into two groups according to type of implant used for surgical fixation: one group treated with intramedullary proximal femoral nail (EBA) and the other with sliding hip screw (DHS). Comorbidity, hemoglobin level (Hb), hematocrit (hct) level, number of transfusions, and days of hospitalization details were evaluated. Postoperative X-rays were analyzed to assess the quality of reduction and to identify non-union, malunion, mechanical failures, and heterotopic ossifications. The modified Harris Hip Score, fracture mobility score, and Parker Mobility Score were calculated. Cost analysis considered the orthopedic device, operating room, transfusion, and hospital costs for the primary hospital stay.

Femoral neck fractures are challenging and debilitating conditions, particularly affecting elderly patients. It is estimated that hip fractures affect 18% of women and 6% of men[1] with devasting social and economic costs for patients and the healthcare system.[2] Intertrochanteric fractures are not uncommon and several surgical strategies have been proposed to achieve stable fixation of the proximal femur and to promote early weightbearing.[1,3]

The intramedullary nail and the sliding hip screw are both recommended surgical procedures for two-part intertrochanteric femoral fractures. Treatment decisions are often guided by the surgeon’s own preference and the stability of the fracture. Nevertheless, there are conflicting findings concerning outcomes and postoperative results in the literature.[4-7]

There is a limited number of studies analyzing perioperative outcomes in terms of complications and the direct cost of different surgical options for intertrochanteric femoral fractures. Despite this background data, further evidence is still required.

In this study, we aimed to compare perioperative results of sliding hip screws and intramedullary nails for two-part femoral fractures through the analysis of transfusion rates, postoperative blood loss, midterm outcomes, and direct costs. We hypothesized that the sliding hip screw method could have a better overall performance regarding transfusion rate, blood loss, and cost.

This single-center, retrospective study was conducted at Ospedale Policlinico San Martino, Clinical Ortopedica, Department of Surgical Sciences (DISC) between January 1st, 2015 and December 31st, 2019. The study was conducted in accordance with the Strengthening the Reporting of Observational studies in Epidemiology (STROBE) guidelines and checklist.[8] Data of patients experiencing emergency department diagnosis of proximal femoral fracture for the timeframe were retrieved from the hospital database. Inclusion criteria were patients treated by the same expert surgeon for simple intertrochanteric two-part femoral fractures within 48 h from emergency department admission defined according to preoperative X-rays and intraoperative fluoroscopy evaluation with Arbeitsgemeinschaft für Osteosynthesefragen (AO).[9] and EvanJensen[10,11] classifications. Exclusion criteria were patients with a preoperative hemoglobin (Hb) level of <8 g/dL, ionic disorders, pneumonia or sepsis, arrythmias, history of tumors, pathological fractures, other types of femoral neck fractures, polytrauma, polyfractures, previous surgeries on the affected hip, patients not fit for surgery and surgeries performed by residents or fellows.

Preoperative X-rays and fluoroscopy images were reviewed by two independent orthopedic research fellows who classified femoral fractures according to AO and Evan-Jensen classifications. The interobserver reliability was calculated.

A total of 944 patients underwent surgical treatment for femoral neck fracture throughout the study period, among which 859 were excluded for not meeting the selection criteria (438 medial fractures, 390 lateral fractures, 26 polytrauma/ polyfractures, five previous hip surgeries). Finally, a total of 85 patients (70 males, 15 females; mean age: 85.6±9.5 years; range, 33 to 99 years) were included and were treated by the same trained surgeon (>100 cases for year).

The patients were stratified and divided into two groups according to the type of implant used for surgical fixation: one group was treated with the intramedullary proximal femoral nail (Endovis B.A., EBA, Citieffe, Italy), the other was treated with the sliding hip screw (DHS, Synthes, PA, USA). Details of surgical procedures were collected and data of the operative time and the fluoroscopy X-ray exposition were compared.

Clinical data during hospitalization was retrieved from the institutional database. Details of comorbidities, Hb, hematocrit (htc) level, number of transfusions, and days of hospitalization were recorded and compared.

The latest follow up X-rays were reviewed to identify non-union, malunion, mechanical failures and heterotopic ossifications. Malunion was defined as an angular deformity of the femoral neck (exceeding 10° compared to contralateral side) or the shortening/ collapse or malrotation of the femoral neck without hardware failure.[13] Similarly, mechanical failure was defined as secondary fracture displacement due to instability of the primary osteosynthesis with or without implant breakage.[14] The patients were recalled to undergo a clinical and radiographical re-examination at final follow-up and their survival rates were calculated.

The modified Harris Hip Score[15] the fracture mobility score and the Parker Mobility Score[16] were calculated by the same blinded observer to assess the functional results at the final assessment.

The need for a blood transfusion during hospital admission was defined as the primary outcome measure, nonetheless, the development of the study highlighted the relevance of the functional results, survival, radiographical results and the final cost for the procedure as significant variables.

All operations were performed under spinal anesthesia and intravenous antibiotic prophylaxis (cefazoline 2 g) was administered 30 min before skin incision.

Adequate closed reduction under fluoroscopy was obtained before the skin incision.

The sliding hip screw was performed with an 8 to 10-cm longitudinal incision under fluoroscopic guidance. The iliotibial band was incised along its fibers and the posterior aspect of vastus lateralis muscle was identified and gently reflected anteriorly. A periosteal elevator was used to complete the dissection between the muscle and the intermuscular septum and the branches of perforating arteries were carefully identified and coagulated. The standard AO DHS (four holes) was introduced following surgical technique. No drain was used.

Intramedullary nailing was performed with the same operative setting. A 3-cm longitudinal skin incision was performed under fluoroscopy guidance extending proximally from the apex of the grater trochanter. The gluteus maximum and gluteus medius were split in line with their fibers. A marker wire was inserted at the tip of the grater trochanter and a standard nailing technique was completed.

Final fluoroscopy views (anteroposterior and lateral) were taken in all cases at the end of the procedure.

A post-hoc calculation was performed considering the primary outcome measure for continuous endpoint and two independent sample studies. The resulted post-hoc power of the present study on 85 patients was 99.8%.

Statistical analysis was performed using the IBM SPSS version 19.0 software (IBM Corp., Armonk, NY, USA). Continuous variables were expressed in mean ± standard deviation (SD) or median (min-max), while categorical variables were expressed in number and frequency. The Shapiro-Wilk test was used to identify normally distributed parameters. Differences between means were calculated with the t-test for continuous variables or with the Mann-Whitney U test, if not normally distributed. Categorical variables were calculated using the chi-square test or Fisher exact test. The interobserver reliability for radiological analysis was evaluated by Cohen’s Kappa coefficient. KaplanMeier survival function curves were created to analyze survival of included patients stratified by type of surgery. The log-rank test was use to compare survival rates of the two groups. A p value of <0.05 was considered statistically significant.

Preoperative X-rays were analyzed and the interobserver reliability for fracture classification was 0.83 for AO classification and 0.78 for Evan-Jensen classification showing excellent and good agreement between the two observers.

In this study, 44 patients underwent surgical fixation with DHS and 41 underwent intramedullary nailing. No differences were found between baseline demographic data of the patients (Table I)

All the included procedures were performed within 48 h of emergency department admission. No differences of preoperative Hb and htc levels were found between the groups.

A significantly higher transfusion rate during hospitalization was detected in the patients who underwent EBA nail and there was a significantly lower Hb level and htc on postoperative Day 1 and Day 3 (p<0.05). Details of perioperative measured outcomes measures are shown in Table II.

No patient was lost during follow-up and no adverse events, infections, reoperations or revisions were registered.

The latest X-rays of all included patients (n=85) were assessed and details are shown in Table III. No differences among non-unions, malunions, coxa vara, and heterotopic ossifications were detected (p>0.05).

The final clinical examination was performed on 60 (70.6%) patients who survived after a mean of 41.6±20.7 (range, 12 to 73) months and were finally available for clinical examination. No differences were found in the clinical and functional scores at the latest follow-up (Table IV).

Table 4. Clinical and functional scoring data of survivors at the final follow-up
×

The overall one-year mortality rate of the present series was 15% (14.3% for DHS group and 15.8% for nail group) without significant differences between the two techniques (p>0.05).

The Kaplan-Meier survival functions of two surgical strategies are presented in Figure 1. There was no significant difference in the overall survival between the two groups (p>0.05) (Figure 2). 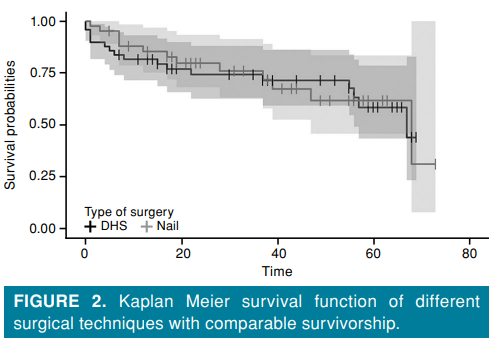 The present study showed that the sliding hip screw and the intramedullary nail were both reliable surgical strategies for the treatment of twopart intertrochanteric femoral fractures in elderly patients and that both provided comparable midterm clinical outcome and failure rates. However, patients who underwent DHS fixation demonstrated less postoperative anemization, lower transfusion rates, and lower costs.

The treatment of intertrochanteric fractures has evolved along with evolution of the implants used to fix them, although there remains conflicting evidence to guide the choice of proper devices with variation depending on country of practice and aspect of surgeon training.[7,17-19]

Several studies have reported the significant advantages of intramedullary nailing regarding blood loss, pain, fracture stability, early functional results and operative time.[20-24] However, the available literature has examined the results of different types of proximal femur fractures and types of hardware on a heterogenous population, often doing so with limited cases.[18,25] The proximal intramedullary nail temporarily compensates the support of the medial column and provides superior stability and grater static loads than DHS in fractures with involvement of the medial wall.[26] However, there are few comparative studies reporting details of clinical and radiographical outcomes with cost analysis of the intramedullary nail and the sliding hip screw in homogeneous populations of A1 intertrochanteric fractures.[5,20,21,26,27] The present study demonstrates comparable mid-term clinical outcomes, survival and failure rates of DHS compared to EBA nails. Moreover, DHS has significant advantages regarding Hb trends during hospital admission, need for blood transfusions, intraoperative fluoroscopy exposition, and decreased costs with an acceptable increase in operative times.

Sliding hip screw represents cost-effective procedure for stable intertrochanteric fractures (A1) or those with questionable stability (A2), whereas intramedullary nail fixation is more effective in reverse fracture pattern (A3) with fixation failure rate and implant cost being the most important factor in determining implant selection.[29] Despite the lack of evidence and higher costs, cephalomedullary nails are still the most commonly used implants in the current treatment of intertrochanteric hip fractures.[30,31]

Nonetheless, the present study has some limitations. This is a retrospective comparative study, and although well-powered, there is a moderate risk of bias and potential hidden confounding factors. Second, this study did not include A2 fractures where intramedullary nail represents the preferred treatment. The strengths of this study are the independent observer blinded to the surgical treatment (for fracture classification and clinical evaluation) and the homogeneous population.

This retrospective singlecentre research was approved by the CER Ospedale Policlinico San Martino, Regione Liguria review board (IRB number 252/21). The study was conducted in accordance with the principles of the Declaration of Helsinki.

A written informed consent was obtained from each patient.
Data Sharing Statement: The data that support the findings of this study are available from the corresponding author upon reasonable request.