Knee arthroplasties are successful procedures that allow patients to return to their pre-arthritic functional levels. However, the success rates can be blemished by prosthetic joint infections, which are devastating complications that commonly render patients worse off than before the index surgery. Inoculation of the pathogens is frequently from the index surgery, or through the bloodstream. Herein, we report a case of a prosthetic joint infection by which the pathogens were most likely inoculated from direct contact, through a traumatic open knee wound occurring from a road traffic accident. Management of the infection, involving an incision & drainage with modular parts exchange, as well as the challenges with the soft tissue envelope is highlighted. At one year of follow-up, the infection seemed to be curtailed. Currently, the patient is very satisfied with the condition of his knee, which has a range of motion of 0 to 135 and his pre-morbid function has been regained. This case denotes the importance of early identification, soft tissue management, as well as a multidisciplinary approach in managing such conditions.

Periprosthetic joint infections (PJIs) are devastating conditions that lead to significant morbidity and mortality. The two main routes of acquiring PJIs are direct inoculation from surgery and hematogenous spread. To the best of our knowledge, there is a paucity of reported cases of a PJI resulting from direct trauma, leading to an open knee injury in a prosthetic joint.

It is well established that chronic infection in arthroplasties can lead to a chronically discharging sinus, leading to soft tissue defects, which preclude the possibility of debridement and implant retention (DAIR) as an option for these patients.[1] The soft tissue compromise in this case, however, is a result of an acute traumatic process, and although the size is significantly larger compared to a non-healing and persistently draining wound of an acute PJI, the nature of such wounds are also different from a sinus tract from skin and soft tissue ulceration of a chronic PJI.[2]

The abruptness of the injury and onset of infection also decreases the possibility that a mature biofilm has formed around the implant and, hence, retaining well-fixed components would not reduce the chances of infection eradication in this patient. Subsequent surgeries aim to eradicate the infection, by reducing the chances of any biofilm formation, as well as to obtain a healthy soft-tissue envelope around the prosthesis to optimize future function and reduce chances of future complications.

Due to the rarity of such cases, there are no clear management algorithms available for these conditions. The uniqueness of this situation calls for a tailored, multidisciplinary management approach. Herein, we report a case of a prosthetic joint infection by which the pathogens were most likely inoculated from direct contact, through a traumatic open knee wound occurring from a road traffic accident.

A 70-year-old man, with a history of bilateral knee replacement 10 years ago, which were wellfunctioning, enabling him to go for long walks, ride motorcycles etc. presented to our emergency department after sustaining degloving injury over his right knee following a fall from his motorcycle. The incident happened in a palm oil plantation, right after a period of rain and the wound was unfortunately contaminated with mud from the grounds. Clinical examination revealed a jagged 8x6-cm degloving wound over the anterior aspect of the knee (Figure 1). There was bleeding from the wound; however, there was no fat globules seen nor was the implant exposed. The range of motion (ROM) of the knee was limited due to pain. Intravenous cefuroxime 1.5 g and gentamicin 160 mg, as well as intramuscular anti-tetanus toxoid, were administered immediately. 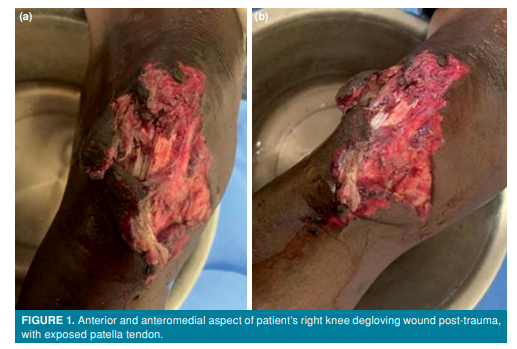 He underwent emergency wound debridement and arthrotomy washout of the right knee 7 h post-trauma. Intraoperatively, parts of the patella tendon were found to be unhealthy and had to be excised. The skin closure was performed under tension (Figure 2a). In the ward, persistent serous discharge from the wound was noticed, with a high C-reactive protein (CRP) reading of 139 mg/L. Thus, we decided to treat him as a PJI and planned for repeat surgery: right knee wound debridement, arthrotomy washout, synovectomy and polyethylene exchange. The surgery was done in two stages: the first stage involved identification and removal of clearly and potentially unhealthy tissues, which may act as a medium that harbors infection. After thorough debridement, the wound was soaked in (B. Braun, Sempach, Switzerland) Prontosan solution for 15 min and washed with 9 L of normal saline. The second stage of surgery was performed with fresh skin preparation, drapes and a different set of clean instruments. Repeat irrigation was performed and a new polyethylene liner, PFC Sigma (Depuy Synthes, J&J, Warsaw, USA) was replaced. Undermining as well as pie-crusting part of the medial fascia assisted in the closure of the soft tissue; however, the part of the patella tendon was exposed with loss of the paratenon. This, along with skin loss over the anteromedial aspect resulted in the utilization of negative pressure wound therapy (NPWT) to assist in tissue healing, as well as reducing the risk of wound discharge (Figure 2b).

Figure 2. (a) Initial wound after the first debridement, with closure in tension and inadequate soft tissue coverage over the prosthetic knee, leading to persistent wound drainage. (b) Wound after first debridement and liner exchange, with closure obtained with help of undermining as well as pie-crusting part of the medial fascia and immediate negative pressure wound therapy application. (c) Wound after the third debridement, and right medial hemi-gastrocnemius flap placement, pre-split skin grafting.
× 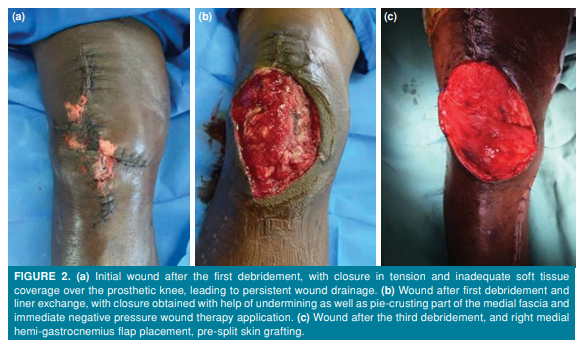 The patient’s right lower limb was also immobilized with a cylinder slab after surgery. Knee tissue and fluid culture grew Bacillus cereus as well as Enterobacter cloacae complex. He was treated with parenteral antibiotics (intravenous cefepime) for two weeks, after which oral antibiotics (ciprofloxacin) was commenced for a total of three months.

He underwent a total of four cycles of NPWT with a second look and re-debridement operation between the first and second cycle of NPWT. Over these three weeks, the inflammatory parameters gradually declined.

The Reconstructive Microsurgery Team was consulted to help with soft tissue closure. Once the wound was clean, coverage of the anterior wound was performed with a right medial hemi-gastrocnemius muscle flap (Figure 2c) and split-thickness skin graft. A cylinder slab was kept postoperatively. He was discharged well 10 days later and gentle ROM knee exercises knee was commenced.

Serial clinical follow-ups showed that his knee flap wound healed uneventfully with a good ROM and function (Figure 3). One-year after discharge, he was able to walk well without aid, was pain-free, and able to achieve full knee extension and knee flexion up to 120 degrees. The patient’s Knee Society Score was 55, 90, and 92 at 3, 6, and 12 months, respectively. The final laboratory readings were as follows: CRP 1.0 mg/L, erythrocyte sedimentation rate (ESR) 17, and white blood cell (WBC) count 6.0x109 L. His final X-rays at 14 months post-trauma revealed a well-positioned prosthesis with no signs of loosening (Figure 4). 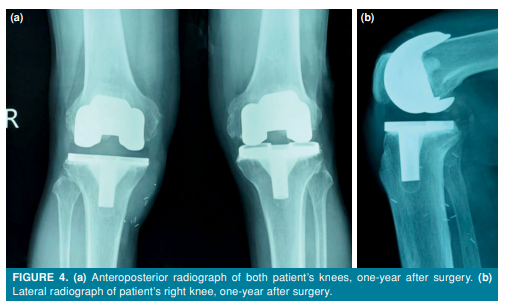 The patient was informed that data from the case would be submitted for publication and gave his consent.

This case report demonstrates the management of a unique condition, where a PJI was obtained from direct inoculation in a previously well-functioning knee arthroplasty.[3] A comprehensive search of the available English literature has not yielded a similar case. It is well established that a chronically discharging sinus leads to poor soft tissue conditions, and performing a DAIR procedure would likely produce poor results.

However, in our case, although the infection was established, with the patient’s poor soft tissue conditions, we were quite certain that a mature biofilm has not formed. Hence, an extensive debridement was performed, with the removal of the existing polyethylene to access the posterior soft tissues. Once the debridement was deemed adequate, the knee was washed with Prontosan and a large amount of normal saline. Prontosan solution contains chitosan, which has been proven to prevent biofilm formation due to its ability to disrupt negatively charged cell membranes when microbes settle on surfaces.[4] To replace the liner, a new set-up was performed with fresh skin preparations, drapes and surgical instruments.

From the debridement, synovial as well as tissue cultures (two samples) grew Bacillus cereus and Enterobacter cloacae complex, both of which are usually hospital-acquired pathogens. However, both bacteria are noted to also be present in soil, and most likely inoculated at the point of trauma, when the prosthetic joint was contaminated with wet soil at the palm oil plantation.[5] These organisms are not the usual causative organisms for PJIs and this denotes the importance of organism identification in the treatment of this case. Preemptive antibiotics that were commenced at the initial period, which would usually cover the common organisms: i.e., skin commensals would not have been effective in the treatment. A multidisciplinary team approach with good communication between each team, involving orthopedics, infectious diseases and medical microbiology is essential to ensure good patient outcomes.[6]

While soft tissue defects and infection following an open prosthetic knee injury can lead to potentially devastating complications, if managed properly and promptly, these risks can be minimized and the patient can regain good functional recovery with high satisfaction. Direct wound closure under tension in such a case is not favorable, as it increases the risk of wound dehiscence and decreases perfusion to the wound edges. The “Pie-crust” techniques used in this case allows gradual tension loading at the wound.[7] The NPWT is an excellent modality, as well as it provides a closed, moist environment, extracts interstitial fluid that can retard cell proliferation, and promotes granulation tissue growth. Moving up the soft tissue reconstruction ladder, rotational flap such as medial gastrocnemius flap chosen in this case is a great way to cover full-thickness defects which expose tendon, bone or implant. This axial pattern flap is popular, as it is versatile with excellent mobility, ease of harvest and minimal functional loss.[8]

In conclusion, our treatment algorithm in addressing PWD after an open knee injury, in this case, is similar to the approach commonly adopted by arthroplasty surgeons in treating acute prosthetic joint infection. A particular emphasis was placed on multiple thorough tissue debridement followed by liner exchange and NPWT. Finally, flap reconstruction was done to achieve satisfactory wound coverage. This integrated, multidisciplinary team approach can help optimize care, minimize morbidity and accelerate rehabilitation. It forms a safe and reliable framework and can be an important part of the armamentarium to treat complex soft tissue defects after an open prosthetic knee injury.