Objectives: In this study, we aimed to analyze patient mortality rate after non-operative treatment of hip fractures to determine the distribution of causes of death and to compare factors affecting mortality.

Patients and methods: Between January 2013 and March 2019, a total of 93 patients (17 males, 76 females; mean age: 86.0±7.4 years; range, 64 to 98 years) who had hip fractures and were treated non-operatively were analyzed retrospectively. Survival, date of death, and cause of death were collected and analyzed. Baseline demographics, pre-trauma ambulation, pre- and post-trauma residence status, American Society of Anesthesiologists Physical Status (ASA PS) classification, and Parker’s mobility score were compared with one-year mortality rates.

Conclusion: A significant number of patients are still treated non-operatively after hip fractures, and they have a high mortality rate. Efforts and research are needed to reduce mortality and improve the quality of life.

Hip fractures, including femoral neck and intertrochanteric fractures, are considered serious fractures due to high patient mortality and fatality rates.[1,2] The latest hip fracture incidence data depends on the study area, subject, or method,[3,4] but the absolute number of fractures seem to be rise in aging populations.[5] Therefore, the socioeconomic burden of these fractures is expected to be a challenge.[6]

Currently, the general treatment principle for hip fracture is urgent operative treatment, such as osteosynthesis and arthroplasty.[7] This is because operative treatment helps to restore function, return to daily life,[8] improve quality of life,[9] and shortens hospital stay.[10] However, in the clinical field, there are situations in which non-operative treatments should be considered due to the patients’ general condition,[7,11] other comorbid diseases, refusal of operative treatment by patients and their families, or burden of medical expenses.[12,13] According to previous studies, this ratio ranges from 3.7 to 6.2%.[12-14]

Although there have been studies on the mortality rates of non-operative treatment after hip fracture,[11,12,15-17] the absolute number of studies is limited. There are some limitations in such studies such as insufficient qualitative analysis (in population studies),[12,16] or small number of subjects.[15] Therefore, in this study, we aimed to analyze the mortality rate after non-operative treatment of hip fractures and to determine the distribution of causes of death, which has not been studied so far. In addition, the factors affecting mortality, such as age, sex, fracture site, pretrauma ambulation, pre- and post-trauma residence status, and general condition were analyzed.

This single-center, retrospective study was conducted at Bundang Jesaeng General Hospital, Department of Orthopedic Surgery between January 2013 and March 2019. Hip fractures were defined as femoral neck and intertrochanteric fractures. Among them, patients with low-energy injuries over 60 years of age were included and patients with isolated greater or lesser trochanter fractures, pathological fractures, or periprosthetic fractures were excluded. All patients had hip fractures and did not undergo operative treatment. A total of 93 patients (17 males, 76 females; mean age: 86.0±7.4 years; range, 64 to 98 years) were included in the study (Figure 1). A written informed consent was obtained from each patient. The study protocol was approved by the Institutional Review Board of Bundang Jesaeng General Hospital (data/no: August 23, 2019/DMC 2019-08-015). The study was conducted in accordance with the principles of the Declaration of Helsinki.

Figure 1. Flowchart of the study.
× 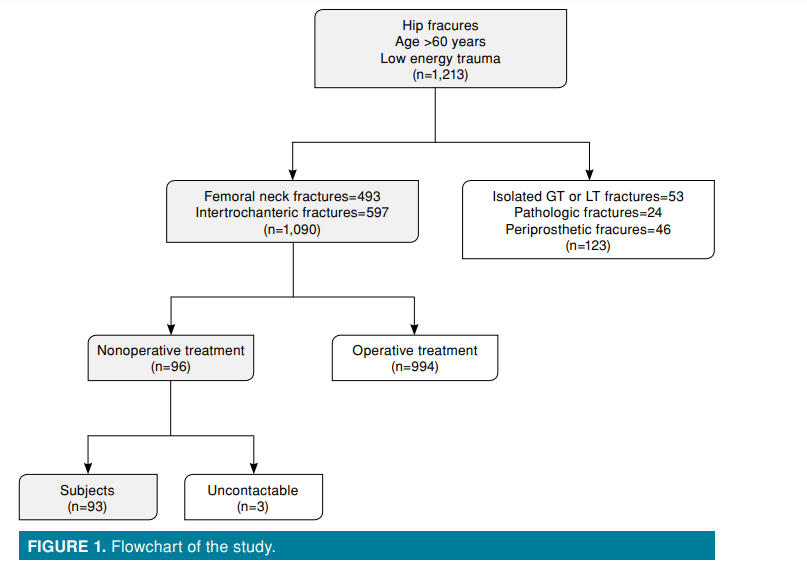 Comorbidities, pre-trauma ambulation, residence status, and Parker’s mobility score[18] were recorded at the patients’ first visit to the emergency room or outpatient clinic. Based on this record, the American Society of Anesthesiologists Physical Status (ASA PS) classification[19] was categorized.

Advanced examinations were performed for the surgery, and they were prepared under consultation with appropriate specialists such as anesthesiologists, cardiologists, and pulmonologists. Despite these efforts, when operative treatment could not be performed due to comorbidities and the patient’s physical condition, sufficient explanation was provided and all patients and their legal guardians were informed about the necessity of operative treatment and complications that could occur, if they were not followed. Nevertheless, when they refused operative treatment, they were discharged after writing a voluntary discharge against medical advice for refusal of treatment.

The patients who were discharged from the hospital after they decided to undergo non-operative treatment were reviewed by medical records and wired/wireless interviews with them or their families. Information about their post-trauma residence status and survival or death (date of death, cause of death on the death certificate), was also collected. The cause of death was analyzed according to the International Classification of Diseases 11th Revision (ICD-11).

The 3-, 6-, 12-, and 24-month mortality rates were defined as the proportion of deaths among patients elapsed that time from the day of trauma. To illustrate, the 12-month mortality rate was calculated with patients who passed 12 months after trauma, and at the time of investigation, all patients within 12 months of trauma were excluded from the subject, regardless of their survival. Factors affecting mortality were analyzed in these patients of 12 months after trauma. Meanwhile, causes of death were studied with all patients who died at the point of investigation.

Of 1,090 patients with hip fractures, 96 (8.81%) were treated non-operatively. Of 96 patients, three patients were excluded from the study, as it was impossible to contact both themselves and their families. And the remaining 93 patients who could obtain information such as survival or death were included in the study. Table I shows the baseline demographic characteristics of the patients.

Respiratory diseases (33.3%) represented by pneumonia and cardiovascular diseases (13.6%), such as thromboembolism and ischemic heart disease, were the main causes of death among the patients. On the other hand, unclear diagnoses (36.4%), such as unknown, old age, and cardiac arrest, also accounted for a large proportion of deaths (Table III).

Figure 2. Kaplan-Meier curve of the patients (survival probability by months after trauma).
× 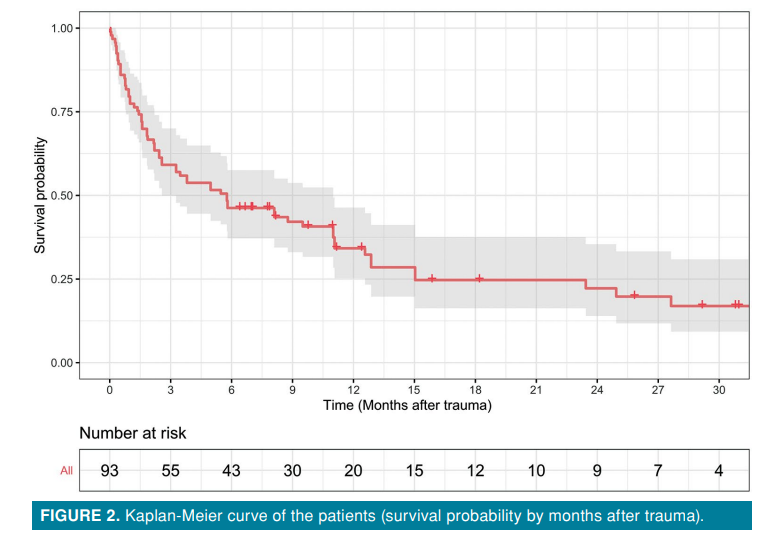 In our study, the one-year mortality rate of non-operative patients was 74.4%. Comparing our results with other studies, Prommik et al.[16] reported a one-year mortality rate of 58%, and Cram et al.[12] reported a mortality rate of 41.5%. In a single-institution, retrospective study, Moulton et al.[15] reported the mortality rate as 56.3%, Chlebeck et al.[17] as 84.4%, and Tay[11] as 29.8%. Based on these results, we considered the equivalence of the patient group. More importantly, the patients in our study had a high average age (86.0 years), while patients in other studies[11,12,15,17] were younger (~82 to 85.6 years), except for the study by Chlebeck et al.[17] (86.7 years), which is the only study that presents a higher mortality rate than ours. In addition, since four nursing hospitals and five nursing homes are located within a 2-km radius of the study center, we considered that many residents of these facilities visited our hospital and the proportion of patients with poor general conditions could be high.

Among the previous studies on the relationship between residence and mortality, only studies on operatively treated patients have been conducted. According to a meta-analysis by Chang et al.,[21] nursing home residents had a 1.97 times higher mortality rate than home residents. On the other hand, the mortality rate in the non-operatively treated group was high, regardless of the place of residence before and after injury.

There has been a lack of relevant study of cause of death after non-operative treatment of hip fractures. The only examples we found were the records of Moulton et al.[15] where one patient each died from pneumonia and sepsis of unknown cause during hospitalization. On the other hand, many other studies on the cause of death of overall hip fracture patients have been reported. The causes of death in patients undergoing operative, as well as non-operative treatments were identified by Panula et al.[24] in the order of cardiovascular diseases, neurological disorders, and respiratory diseases, and by von Friesendorff et al.[25] in the order of cardiovascular diseases, respiratory diseases, and malignant neoplasms. This was quite different from our study, in which death was mainly due to respiratory diseases (34.9%). Our results were also different from the 2018 Statistics Korea data on causes of death.[26] This may be due to lack of ambulation, change of position, and deep breathing, which are essential for recovery,[27] and are limited when surgery is not performed. On the contrary, it is peculiar that in many cases an unclear diagnosis was recorded due to the Korean culture, in which autopsy is taboo.[28,29]

Although this study has the limitation of being a retrospective study, there are obvious ethical issues in conducting a randomized-controlled trial at the present time, when operative treatment is considered the principle of treatment.[7] Furthermore, despite the long study period, many patients underwent operative treatment, and the expected number of subjects did not appear. Even under such circumstances, this study included the largest number of patient groups among single-institution studies conducted so far. However, it is also necessary to understand, if it is possible to generalize the results for the entire population group, since there are no statistically significant differences between the number of study subjects. In the future, additional researches would be possible by obtaining more information such as union or ambulation status of survivors among patients undergoing non-operative treatment.

In conclusion, a significant number of patients are still treated non-operatively after hip fractures, and their mortality rate is high. Efforts and research are needed to reduce mortality and improve the quality of life in such patients.