Simultaneous versus staged surgeries for the treatment of bilateral developmental hip dysplasia in walking age: A comparison of complications and outcomes

Objectives: This study aims to compare the radiological outcomes and rate of complication between single-stage and staged operation for the treatment of bilateral developmental
dysplasia of the hip (DDH).

Patients and methods: A total of 100 patients (13 males, 87 females; mean age: 18.1±2.1 months; range, 12 to 36 months) with bilateral DDH who were older than 15 months of age and treated with open reduction (OR) or Pemberton pericapsular osteotomy (PPO) were retrospectively analyzed. Of the patients, 48 were operated with OR and 52 were operated with PPO. Improvements in acetabular indices, presence of avascular necrosis, radiological results, and other complications were noted.

Conclusion: Our study results show no significant difference in the radiological outcomes and complications between simultaneous and staged surgeries for the treatment of bilateral DDH in children in the walking age.

The incidence of developmental dysplasia of the hip (DDH) is about 1 to 3% in newborns, and 20% of the cases are bilateral.[1] Bilateral cases have both diagnostic and therapeutic challenges in the treatment, as the signs of bilateral DDH is more obscure.[1] This results in late diagnosis of the bilateral DDH cases, which may lead to loss of precious time for conservative management.[2]

Pemberton pericapsular osteotomy was first described by Paul A. Pemberton for DDH in 1965.[6] Since then, it is one of the osteotomy techniques which is widely preferred by pediatric orthopedic surgeons all over the world. It can be performed until the closure of the Y cartilage in children which is used as a hinge for providing the acetabular coverage of the femoral head to maintain a concentric reduction.[7]

Bilateral DDH surgery has been performed either in a single stage or two separate stages in our clinic. We usually observe better outcomes in single-stage surgery. In the present study, we aimed to compare the radiological outcomes and rate of complication between single-stage and staged operation for the treatment of bilateral DDH.

This single center, retrospective study was conducted at Atatürk University Faculty of Medicine, Department of Orthopedics and Traumatology between January 2010 and December 2018. Initially, 253 patients with bilateral DDH who underwent OR and PPO were screened. Of the patients, 38 with talipes equinovarus, cerebral palsy, and spina bifida were excluded from the study. Patients who were older than 36 months and had additional femoral shortening and/or derotation osteotomies and staged surgeries with a prolonged operation duration and bleeding (n=56) and those who had less than 24 months of follow-up (n=59) were also excluded. Finally, a total of 100 patients (13 males, 87 females; mean age: 18.1±2.1 months; range, 12 to 36 months) with bilateral DDH who were older than 15 months of age and treated with OR or PPO were included. A written informed consent was obtained from each parent and/or legal guardian of the patient. The study protocol was approved by the Atatürk University Faculty of Medicine Ethics Committee (B.30.2.ATA.0.01.00). The study was conducted in accordance with the principles of the Declaration of Helsinki.

All surgeries were performed by two senior surgeons who are experienced in pediatric orthopedics. Preoperative acetabular indices and presence of the ossific nucleus were noted. The patients were classified according to the International Hip Dysplasia Institute (IHDI)[11] classification system (Figure 1). 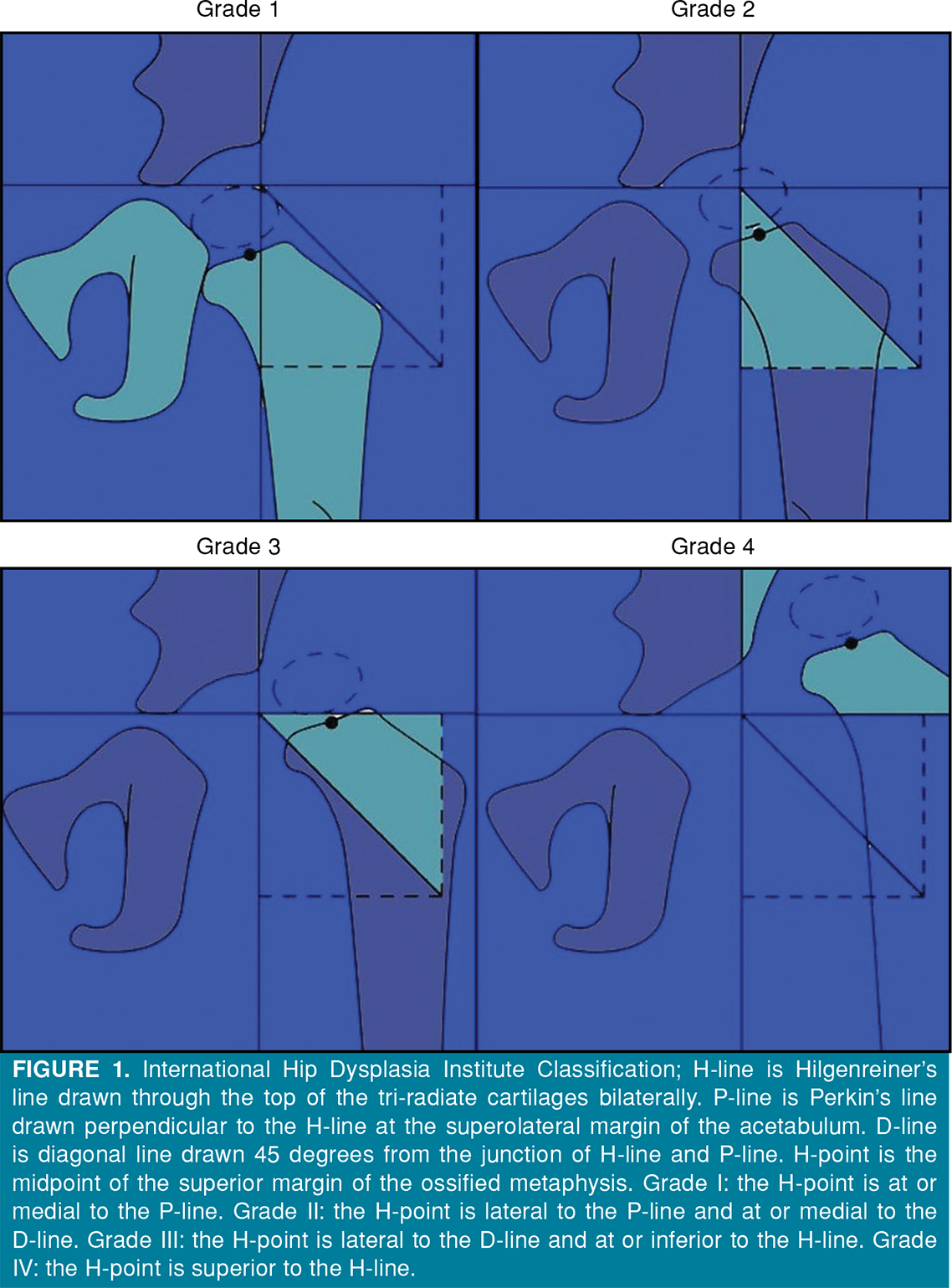 All patients were operated via the Smith-Petersen approach using the same technique. Open reduction of the hip joint with the removal of the barriers of reduction was done with a staged PPO and closure with capsulorrhaphy. After closure, the spica cast was done in a proper position. The patients were kept in the cast for eight weeks postoperatively. There was one-month interval between the operations in staged surgeries and the patients were also kept in spica cast for two months after the second stage. The patients were kept in nocturnal abduction orthosis in the following month of cast removal and were followed every two months in the first year and every six months in the second year (Figure 2). 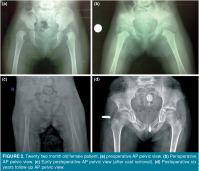 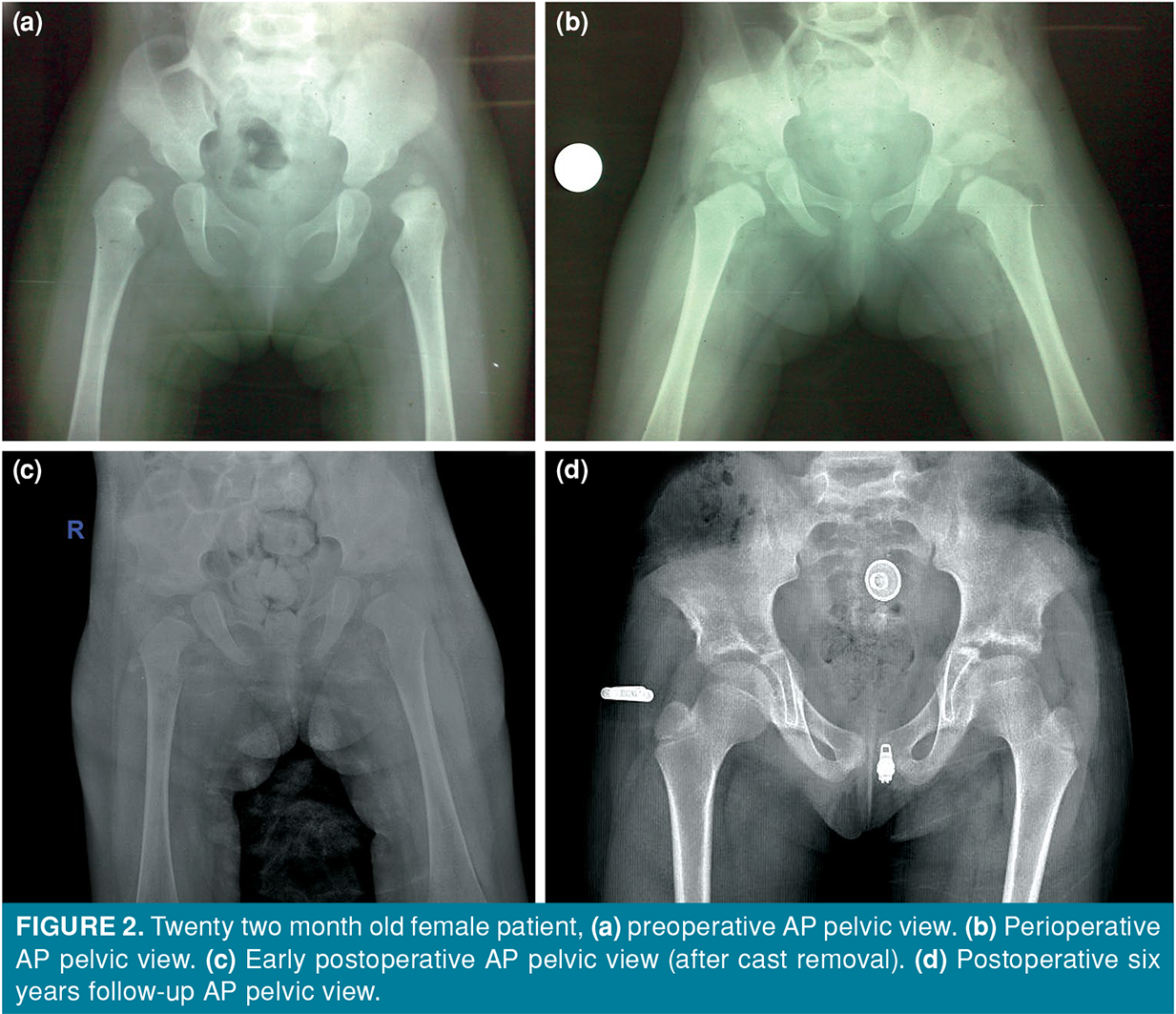 Statistical analysis was performed using the IBM SPSS version 20.0 software (IBM Corp., Armonk, NY, USA). Descriptive data were expressed in mean ± standard deviation (SD), median (min-max) or number and frequency, where applicable. The Shapiro-Wilk test was used to test for normal distribution of continuous variables. The independent samples t-test and Mann-Whitney U test were used, if the distribution of variables was normal and non-normal, respectively. The comparisons between categorical variables were performed using the chi-square test and Fisher exact test. A p value of <0.05 was considered statistically significant.

A total of 100 patients who were at the walking age with bilateral DDH were included in the study. Of the patients, 48 were operated in a simultaneous surgery, whereas 52 patients had staged surgery.

Clinical data of the patients are summarized in Table III. The radiological, clinical outcomes, rate of complications of simultaneous and staged surgery groups were compared (Tables 4, 5 and 6). There was no statistically significant difference between the simultaneous and staged surgery groups in terms of the preoperative acetabular indices, IHDI classification, follow-up period, and age during the operation (Table III) (p<0.05).

Table 4. Comparison of the groups according to IHDI classification
×

Table 5. Comparison of radiological outcomes of the groups according to Severin classification
×

Table 6. Comparison of the groups according to Kalamchi-McEwen classification
×

In addition, there was no statistically significant difference in the last acetabular indices, rate of AVN, and radiological results at the end of 24 months of follow-up between the groups (p<0.05) One patient in staged surgery group had a supracondylar femoral fracture and two had subtrochanteric femoral fractures after a minor trauma within two months after cast removal. No patient in the simultaneous group had fractures. No other complication was observed in any of the patients.

Pemberton pericapsular osteotomy is a frequently preferred technique in treatment of DDH with particularly anterior and superolateral insufficiency.[6,12] It has certain advantages such as not causing pelvic instability, limb length discrepancy, and no need for additional fixation.[13] Salter innominate osteotomy provides bilateral single-stage surgery by not using the symphysis pubis as a hinge, while correcting the acetabular index.[8,13,14] As a result of aforementioned properties, PPO has proven to be a safe, reliable option even in simultaneous surgeries.[6,10,14,15] Yilar et al.[10] reported simultaneous PPO to reduce cost and rate of complications with similar outcomes. Still, simultaneous PPO and OR surgery have certain challenges including difficulty for the surgeon due to the prolonged stressful surgery. That is why the simultaneous surgery is advised to be performed by experienced surgeons.[9,10,14]

Review of the literature reveals a limited number of studies to guide decision making for simultaneous or staged surgeries in the treatment of bilateral DDH. Most of the studies have a common source of bias that is to compare simultaneous bilateral DDH operations with unilateral cases or staged surgeries.[9,14,16] In this study, we evaluated simultaneous bilateral cases with only bilateral cases who had two staged operations to eliminate bias in patient groups. This study is unique for this aspect and it provides valuable information regarding the comparison of single and staged operations. We found no significant difference in the rates of AVN and acetabular indices.

On the other hand, the main limitation of our study is its retrospective design which prevented us from evaluating other parameters such as the psychological effect of surgeries on patients and families. Therefore, further prospective studies with longer follow-ups are needed for a better comparison of simultaneous or staged surgeries.