Treatment of a neglected flexor digitorum profundus entrapment after closed reduction of both bone forearm fracture: A case report

Flexor tendon entrapment (FTE) is a rare and usually lately diagnosed complication of pediatric forearm fractures. In this case report, we present a case of a neglected ring and little finger flexor digitorum profundus (FDP) entrapment after closed reduction of both bone forearm fracture and treated five years later due to late diagnosis. A 20-year-old man presented to outpatient clinic with flexion contracture of ring and little finger that occurred after both-bone forearm fracture treated with closed reduction and long arm cast five years ago. On his physical examination, flexion contracture of ring and index fingers was thought to be due to entrapment of tendons at the level of forearm and surgically released. Five years after surgical treatment for FTE, the patient had full range of motions at both fingers. He had no additional complaint. In conclusion, FTE is a rare complication after both bone forearm fractures. It should be kept in mind in the treatment of both bone forearm fractures. Surgical treatment of FTE in late cases is an effective procedure with excellent results.

Both bone forearm fracture (BBFF) is the most common fracture of pediatric population accounting for about 50% of all pediatric fractures.[1] Most of these fractures treated with non-surgically with closed reduction and long arm casting under sedation in the emergency department or operating room.[2] Surgical management is indicated, when adequate or stable reduction cannot be achieved.[2] Excellent results have been reported in the literature both with non-surgical and surgical management.[1] However, there are well-known complications of treatment of forearm fractures such as compartment syndrome, malunion, and neurovascular injury.[2] Nerve and tendon entrapment in the fracture line after reduction are rarely reported complication of these fractures.[3-13]

In this article, we present treatment of flexor digitorum profundus (FDP) tendon entrapment of ring and little finger five years after closed reduction of BBFF.

A 20-year-old male patient presented to the outpatient clinic with inability to extend at ring and little finger of left hand. In his medical history, he had a BBFF treated with closed reduction and long arm casting five years ago. On his physical examination, the patient had lack of passive and active extension at proximal and distal interphalangeal joints of both ring and little fingers when wrist in the neutral position (Figure 1). The patient was able to extend both finger when the wrist was flexed. The patient reported failure of previous physical treatment. Surgical exploration was planned. The patient was informed about surgery and a written informed consent was obtained.

Under axillary block anesthesia, the patient was positioned in supine and the forearm was placed on hand table. A pneumatic tourniquet was placed proximal of arm. The extremity was exsanguinated with the Esmarch bandage and the tourniquet was inflated. Then, a volar ulnar incision was made from the wrist to the proximal forearm to identify the entrapment site. The FDP tendons of the ring and small finger were found to be entrapped in ulnar shaft (Figure 2). The tendons were liberalized and passive extension of both ring and little finger was achieved intraoperatively. Myotenolysis was performed for both tendons. After deflation of the tourniquet, meticulous hemostasis was achieved, and wound was closed in a standard fashion.

Postoperatively, the arm was placed into a dorsal long arm splint. Passive range of motion exercises were started one week after surgery. The splint was removed at six weeks after surgery. During five-year-follow-up, the patient had full extension and flexion at small and ring fingers (Figure 3).

Figure 3. Postoperatively range of motion of ring and little finger at five years of follow-up.
× 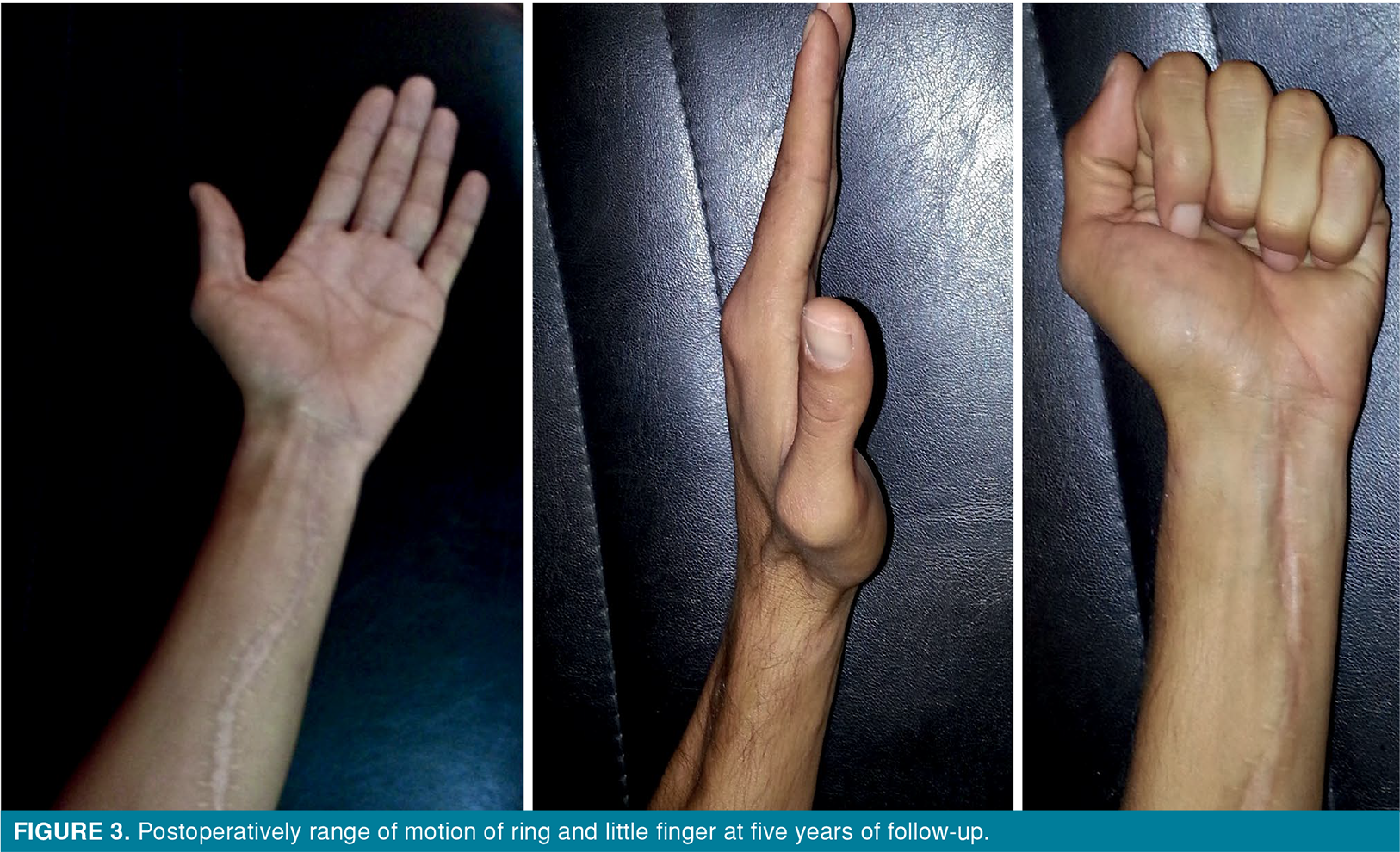 Flexor tendon entrapment, also named as pseudo-Volkmann contracture, is a rarely seen complication of forearm fractures. Patients with FTE are unable to extend affected fingers in wrist extension; however, when the wrist in flexion position, they are able to extend affected fingers. The FTE can be mixed with Volkmann ischemic contractures. However, in FTE patients, there is no clinical ischemic findings and no muscle ischemia during the surgical treatment.[1] Our patient had entrapment of FDP tendon of both ring and little fingers after closed reduction of BBFF. To the best of our knowledge, this is the first case reported from Turkey.[14]

Review of the literature reveals 31 cases (both children and adults) of FTE after forearm fractures.[2-9,12,13] In 13 of previous 31 cases, only one finger was affected, while two or more fingers were affected in 18 cases.[2-9,12,13] The average age of patients is 11.6 years ranging from 4 to 28.[2-9] Flexor tendon entrapment was most commonly reported after closed reduction of BBFF.[7] However, there are also cases of FTE reported following isolated ulnar or radial factures and surgical treatment.[3,6-9,12] In the literature, the initial treatment was closed reduction and casting in 20 cases, open reduction and internal or intramedullary fixation in five cases, closed reduction and intramedullary or percutaneous fixation in three cases, and unknown in three patients.[2-9,12,13] In our patient, the underlying cause of the entrapment was closed reduction of BBFF.

For early diagnosis of FTE, careful examination of fingers should be performed after closed reduction or surgical treatment of forearm fractures. Thione et al.[6] and Page et al.[13] also reported FTE in callus; therefore, physician should be careful during follow-up, if there is no sign of FTE in the early period of treatment. In case of a lack of careful examination, diagnosis of FTE may be delayed until cast removal or even years later.[2-9,13] In case of early diagnosis of FTE, it can be successfully treated with conservative techniques.[8,12] Deeney et al.[8] reported 16 years of delay in diagnosis of middle and ring ringer FDP entrapment after closed reduction for BBFF. In our case, the patient presented five years after the initial treatment.

When the FTE is diagnosed lately, surgical treatment should be performed. Twenty-eight of 31 previously reported in the literature were treated surgically.[2-9] Twenty-six of 28 had full recovery, only two patients had slight tenodesis.[2-9] Surgical interventions include open release, release and lengthening, myotenolysis, tendon transfer, and tenodesis.[2-9] Our patient also fully recovered after myotenolysis and had no problem at five years after surgical treatment.

In conclusion, FTE is a rare, but important and treatable complication of forearm fractures. It can be misdiagnosed as the Volkmann ischemic contracture; however, the lack of ischemic findings clinically and surgically may help to rule out Volkmann contracture. For early diagnosis, the finger range of motions should be checked immediately after reduction. When the FTE is diagnosed early, non-surgical treatments could be utilized for tendon release. If there is a delayed diagnosis, surgical intervention should be performed. Surgical treatments have excellent results in most of the cases.