Literature review and case report of bilateral extensive psoas abscess: A rare case of spondylomyelitis with infection spread to Hunter’s canal with a rare causative microorganism

A 43-year-old male patient with underlying diabetes mellitus presented with lower abdominal pain radiating to left thigh. He was hemodynamically stable, but appeared lethargic. Both iliac fossae were tender, and crepitus appreciated along the anteromedial aspect of the left thigh. The patient initially responded well to treatment and was discharged; however, he was re-admitted several months later due to recurrent collection showing the growth of Klebsiella pneumoniae in the culture and succumbed to sepsis due to deep-seated intramuscular abscess and lung empyema. In conclusion, psoas abscess is a condition that can mimic various pathologies related to the lower abdomen and, therefore, clinicians should always have a high index of suspicion to prevent a missed diagnosis. Early detection may yield good outcomes, if managed with adequate surgical drainage and appropriate antibiotics.

Psoas abscess is a condition where there is purulent fluid in the iliopsoas muscle compartment. This condition was initially often detected in cases of spine tuberculosis before the discovery of modern antituberculosis treatment and, later, became uncommon in developed countries after the discovery of modern antituberculosis treatment.[1] It was often detected late during the progression of disease owing to difficulties in diagnosing this condition. However, the incidence has increased recently with improved imaging modalities such as the computed tomography (CT) scan, a helpful tool to detect the condition, particularly when clinical signs are vague.[2] It is notable that although this condition may progress very rapidly, it is usually confined within the iliopsoas muscle compartment and the common causative organisms are Staphylococcus aureus (S. aureus) and Mycobacterium tuberculosis.[3]

In this article, we present a rare presentation of bilateral psoas abscess with extension into the adductor canal, as well as uncommon causative organism involved.

A 43-year-old male patient with underlying diabetes mellitus and a history of admission for meningitis lesser than one year before this current condition presented with lower abdominal pain with radiation to the left thigh. He also complained of having fever and lethargy for the past three days and eventually unable to ambulate due to worsening pain. On physical examination, he appeared lethargic, while his vital signs were still stable. Both iliac fossae were tender, and crepitus was felt along the anteromedial aspect of the left thigh. The neurovascular status of the bilateral lower limbs was intact. Blood investigations showed lymphocytosis. A CT scan was done urgently and revealed retroperitoneal collection from the L1/L2 vertebral body and the collection was extending to bilateral iliacus muscle. However, it extended beyond the iliopsoas insertion on the left side. The CT scan images revealed also the destruction of the first and second lumbar vertebrae (Figure 1).

Figure 1. Computed tomography images of (a) coronal and (b) sagittal view showing the origin and extension of iliopsoas abscess.
× 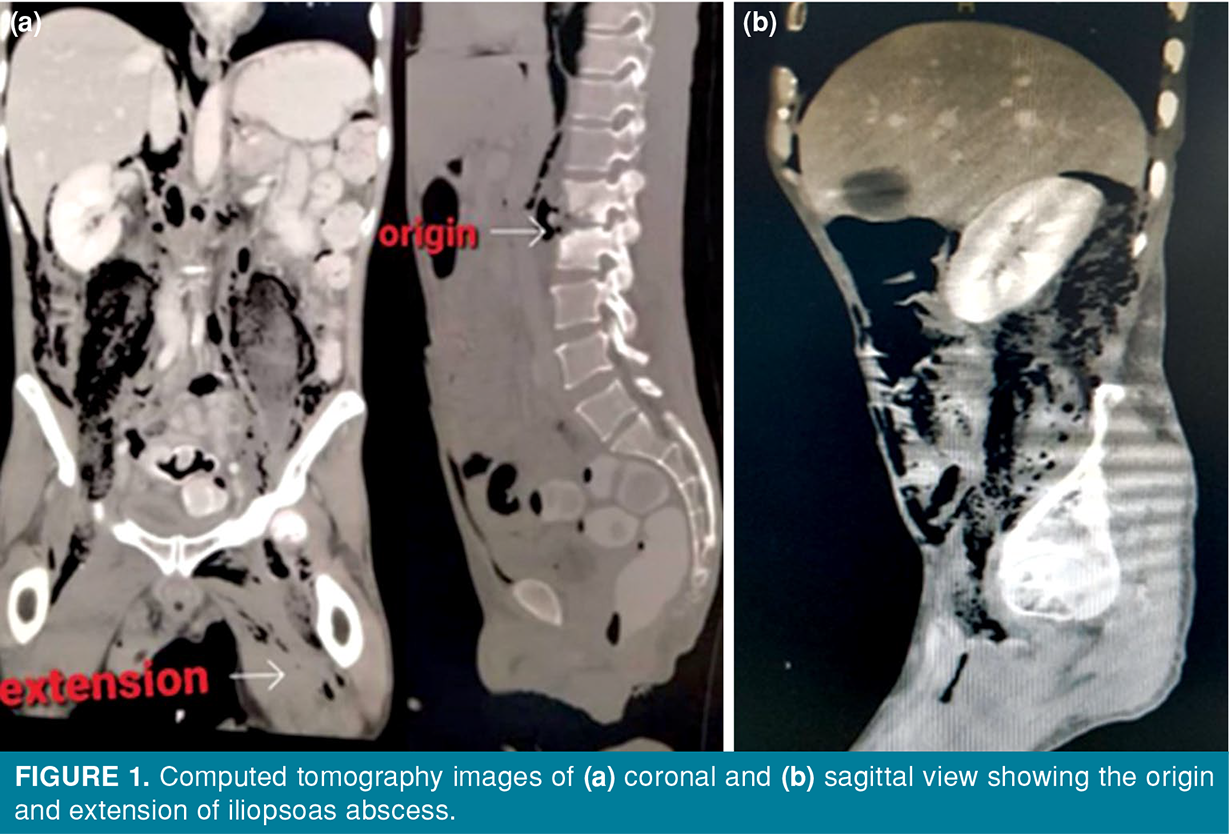 The patient was resuscitated adequately and, then, taken for surgical intervention on the same day as the presentation. Extensive incision and drainage were done bilaterally. Intraoperatively, more than 1,000 mL pus was drained, and the extensive slough tissue was debrided. The collection was found to unusually breach the deep fascia and extent into the left adductor canal (Figure 2). 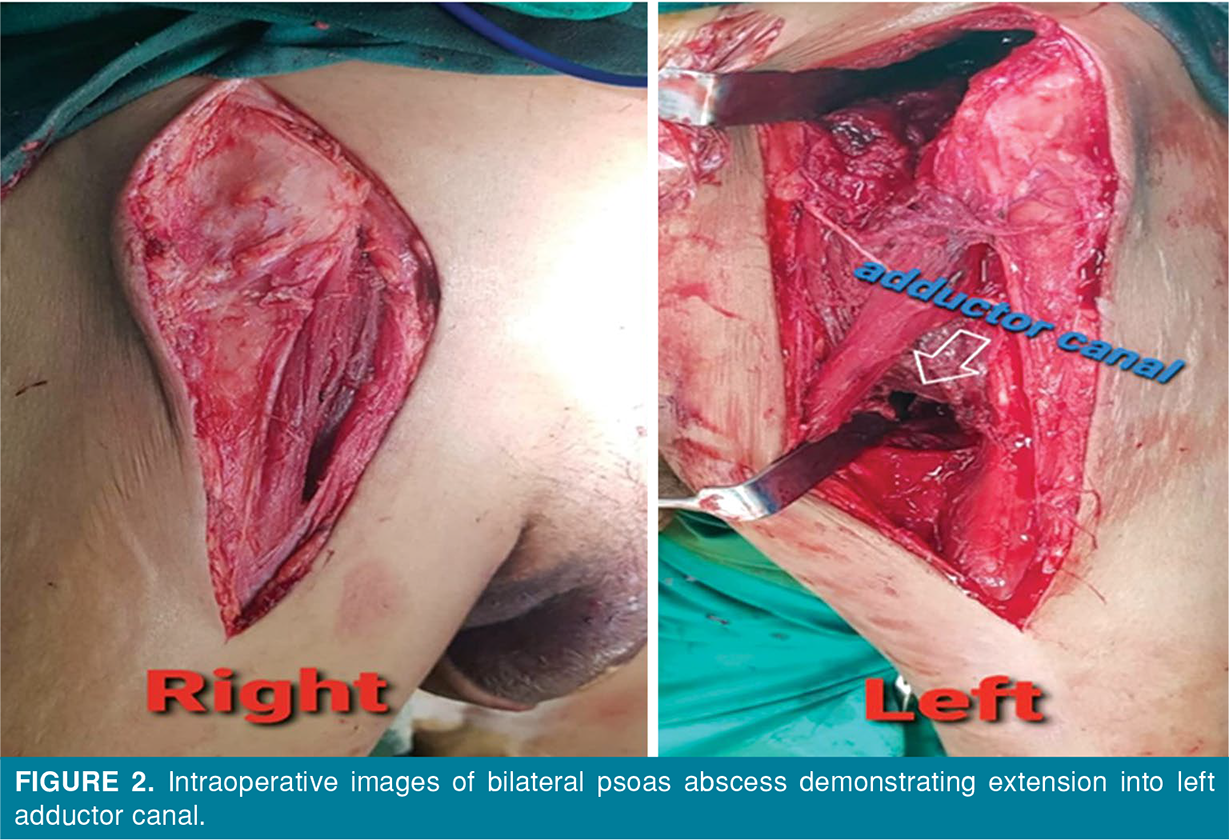 During this setting, a diagnostic laparoscopy was also performed, and intra-abdominal involvement was ruled out. Specimens were sent for culture and sensitivity intraoperatively, which later revealed the growth of Klebsiella pneumoniae (K. pneumoniae). The patient was treated with intravenous amoxicillin/clavulanic acid. A repeat CT scan was done one week later and showed a residual collection. The patient was taken in for another surgical drainage, while intravenous antibiotics were continued. Subsequent repeat scan revealed only minimal residual collection, while there was no worsening of vertebral bony destruction. Although the collection was visualized to involve the L1 and L2 vertebral bodies with bony destruction, no surgical interventions were performed for the spine, as the patient did not have neurological deficits and there was no worsening of the spinal column during treatment with intravenous antibiotics.

This case demonstrates to us the unusual spread of psoas abscess beyond the insertion and compartment of the muscle as detected by CT and later confirmed intraoperatively during incision and drainage of the collection. Patients with psoas abscess commonly present with fever, back pain, limp and sometimes pain and lump which is confined to the groin region.[1] Pain in the thigh region which may serve as a subtle hint for the potential atypical spread of iliopsoas abscess beyond its compartment can be sometimes taken for granted as referred pain due to innervation by L2, L3 and L4 nerve roots.[1]

It is essential to understand the anatomy of the iliopsoas muscle to be able to appreciate the complexity of this condition better. The iliopsoas compartment is located retroperitoneally which consist of iliacus, psoas major and psoas minor, as a hip flexor.[4] The psoas muscle originates from the transverse processes of the 12th thoracic vertebrae to the 5th lumbar vertebrae. It courses downwardly entering the pelvic brim, passes into the inguinal ligament and runs anteriorly to the hip joint capsule which, then, inserts into the lesser trochanter of the femur after forming a tendon. The iliacus muscle joins the psoas to insert via the same tendon.

Rarely, cases of psoas abscess extend beyond the iliopsoas tendon insertion; however, in this case, it was found to extend beyond the insertion and into the adductor canal unilaterally. A case of a 43-year-old man who had a psoas abscess, which unilaterally involved the adductor muscles was described previously.[5] Another case was a 38-year-old male patient who had a left psoas abscess with extension inferiorly to the left adductor muscles.[6] This demonstrates to us that, during surgical drainage of the abscess, a thorough exploration of surrounding structures with adequate care is recommended to avoid incomplete drainage of the purulent fluid in rare cases where it extends beyond the usual compartment of the iliopsoas muscle which would eventually lead to morbidity and mortality.

Although the quadriceps muscle is the commonest site of abscess extension followed by the glutei,[7] a case report demonstrated the involvement of the entire compartment of thigh adductor spread from primary psoas abscess.[5] Although this patient had no comorbidities, he presented with a copious amount of pus from the psoas muscle. However, no further extension was observed. This report proved that a large amount of abscess was susceptible for its additional route. Additionally, it was well mentioned that the abscess might destroy the part of the psoas fascia or muscle hence extend further inferiorly to the femoral triangle via inguinal ligament involvement and subsequent communication to the adductor canal.[8,9] However, the presence of the vastoadductor membrane surrounds the adductor canal prevent a further spread superficially.[10]

Similarly, another case study proved that a high amount of psoas abscess spread up to the thigh and adductor muscles. After four days of antibiotic therapy, the patient demonstrated sartorius muscle necrosis and muscle necrosectomy was performed. However, this patient had a concurrent perforation of appendiceal and adductor areas.[11] Interestingly, an isolated adductor brevis pyomyositis was documented in a patient with a psoas abscess presenting with low back left thigh and groin pain whose urogenital and abdominal systemic symptoms were unremarkable.[12]

It is also worth noting the uncommon causative organism, which was isolated in this case of psoas abscess, being K. pneumoniae. However, it has been widely demonstrated that S. aureus is the common causative organism in most cases of psoas abscess. It was also shown that a 78-year-old male patient who recovered from a liver abscess immediately developed bilateral gas-forming pyogenic psoas abscess caused by K. pneumoniae.[13] This occurrence of the rare causative organism in this condition can serve as a guide to us to be more vigilant with our choices of antibiotics in suspected or confirmed cases of psoas abscess.[14] In conclusion, psoas abscess is a condition that can mimic various pathologies related to the lower abdomen and, therefore, clinicians should always have a high index of suspicion to prevent a missed diagnosis of this condition which may prove to be fatal. We should always attempt to identify the actual extent of psoas abscess, as it can involve unusual adjacent areas such as the adductor canal. Our case also demonstrates that other organisms such as K. pneumoniae may be implicated and, thus, prompt and appropriate antibiotic coverage should be initiated. We would also like to emphasize that a postoperative CT scan should be performed as infection may persist despite surgery. Although this condition is associated with significant morbidity and mortality, it can still have good outcomes, if diagnosed early and managed adequately with surgical intervention and antibiotic coverage.

We would like to acknowledge the Head Department of Orthopaedic and Traumatology for all the support and vision in the publication of this paper.