A rare cause of osteomyelitis of distal phalanx: Candida lusitaniae

Osteomyelitis of the phalanx caused by Candida species are rare. A 49-year-old female patient was admitted to an external center with a splinter injury of the third phalanx of the middle finger of her left hand about 45 days ago. She was referred to our clinic with persistent pain and discharge, despite four-week antibiotherapy. Debridement and curettage were performed and partial excision of the distal phalanx at an appropriate level was done. Her complaints gradually resolved postoperatively with prescribed antibiotics for the pathogen identified as Candida lusitaniae based on the intraoperative cultures. At her three-month follow-up visit, treatment yielded near-excellent results. To the best of our knowledge, this is the first case of osteomyelitis of the distal phalanx caused by Candida lusitaniae in the literature, highlighting the importance of definitive diagnosis and pathogen-specific treatment, rather than empirical treatment, to achieve favorable results with cure.

Osteomyelitis of the metacarpal bones and phalanges accounts for about 1.1 to 10% of hand infections.[1-4] In the majority of cases with phalangeal osteomyelitis, distal phalanx is the most frequently involved bone.[1] In the literature, osteomyelitis of the phalanges caused by the Candida species (spp.) is rare and many culprits play a role in the development of osteomyelitis;[5,6] however, it is a difficult-to-treat condition with a high morbidity rate. Among Candida spp., Candida albicans is the most common cause of osteomyelitis.[7,8] Osteomyelitis caused by other Candida spp. have been described in case reports in the literature.[9] On the other hand, Candida lusitaniae(C. lusitaniae) is an uncommon pathogen in osteomyelitis.[10] Risk factors associated with C. lusitaniaeinfection include neutropenia, post-trauma, hematological malignancies, the use of cytotoxic drugs or corticosteroids, and the receipt of broad-spectrum antibiotics or central venous catheters.[1,11]

Treatment of osteomyelitis mainly involves early diagnosis, adequate antibiotherapy, and surgery. The latter has a wide range of procedures including debridement, curettage, arthrodesis, joint reconstruction, and amputation.[1,12,13] In this report, we present the first case of osteomyelitis of the distal phalanx caused by C. lusitaniaein the literature and discuss its diagnosis and treatment in the light of current data.

A 49-year-old female patient was admitted to an external center with a splinter injury (piece of wood) of the third phalanx of the middle finger of her left hand about 45 days ago. She was referred to our clinic with persistent pain and discharge, despite four-week antibiotherapy (amoxicillin/clavulanic acid 1000 mg, PO, b.i.d.) (Figure 1). Laboratory test results were as follows: white blood cell (WBC) count 11,750 (3,900-10,200)/mm3, erythrocyte sedimentation rate (ESR) 17 (0-20) mm/h, and C-reactive protein (CRP) 0.000785 (0-0,005) g/L. Physical examination and radiographs revealed osteomyelitis of the distal phalanx (Figure 2). Severe tenderness over the distal volar pulp on palpation and minimal discharge from the entry site of the splinter. Surgical treatment was decided, and a written informed consent was obtained from the patient.

Figure 1. Splinter injury of the third phalanx of middle finger of left hand with pain and discharge.
× 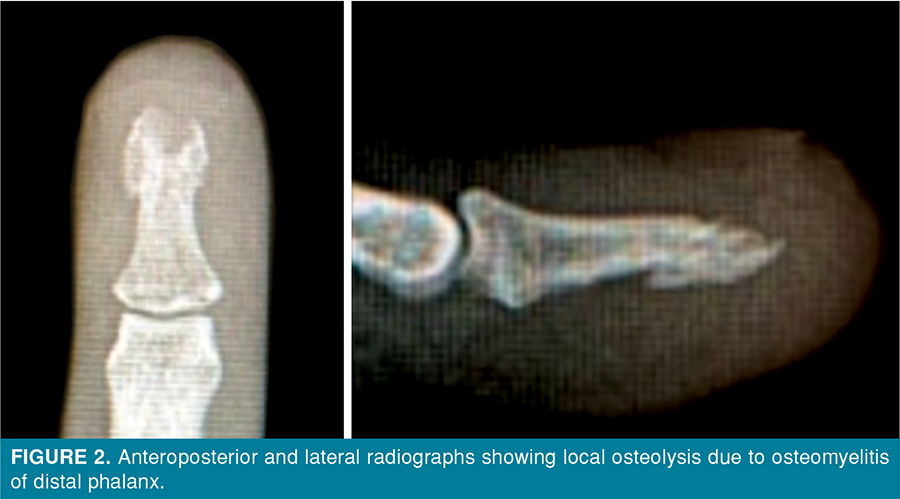 Surgery and follow-up were performed by two hand surgeons of our clinic. During surgery, debridement and curettage were performed, and partial excision of the distal phalanx at an appropriate level was done (Figure 3). Postoperative radiographs confirmed the partial excision of the distal phalanx at an appropriate level (Figure 4). Gram staining of the specimens collected intraoperatively showed an abundant number of neutrophils (polymorphonuclear neutrophil leukocytes) with no microorganism. Bacterial and fungal cultures were incubated and regular-shaped colonies with white to cream color were seen at 72 h of incubation in the blood agar and sabouraud dextrose agar. Using the matrix-assisted laser desorption/ionization time of flight mass spectrometry (MALDI-TOF-MS; VITEK®; bioMérieux Diagnostics, France), C. lusitaniaewas isolated. The antifungal susceptibility was tested via the VITEK® 2 (bioMérieux Diagnostics, France) antimicrobial susceptibility testing. The culture analysis showed production of C. lusitaniaeand the pathological examination result was reported as superficial tissue characterized by parakeratosis and squamous hyperplasia. Postoperative laboratory testing showed normal ESR and CRP levels with a WBC count of 9,500/mm3. The patient was consulted to the infectious diseases clinic and fluconazole 100 mg Po (Triflucan®, Pfizer İlaçları Ltd. Şti., Istanbul, Turkey) for three weeks was initiated. Wound dressing was applied every three days and sutures were removed at three weeks. During follow-up visits at three and six weeks, and three months, near-excellent results were achieved. At the end of three months, physical examination revealed full active range of motion of the phalangeal joint. The patient is still free from pain or discharge on later follow-up visits.

Figure 3. An intraoperative view of debridement and curettage with partial excision of distal phalanx.
× 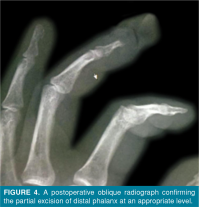 Figure 4. A postoperative oblique radiograph confirming the partial excision of distal phalanx at an appropriate level.
× 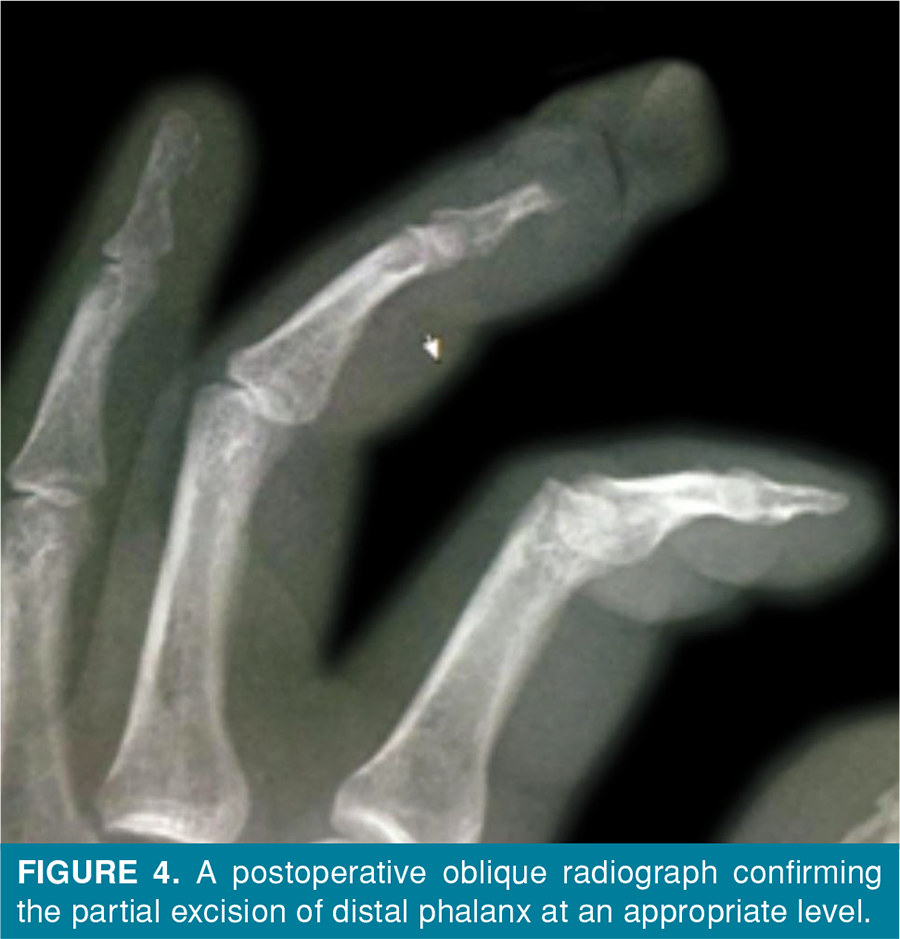 The patient and/or her family were informed that data from the case would be submitted for publication and gave their consent.

In the majority of cases, laboratory testing yields non-specific results with slightly elevated ESR and CRP levels, and leukocytosis in only 35% of patients.[22,23] In addition, plain radiography typically shows bone tissue alterations such as periosteal reaction and destruction 10 to 12 days after the infection.[24] Although combination therapy of voriconazole and posaconazole can be used in the treatment of infections caused by C. lusitaniae[25] fluconazole 6 mg/kg for six weeks is usually administered.[26] In our case, similarly, pre- and postoperative ESR and CRP levels were normal. However, the preoperative WBC count increased, while it tended to decrease after surgery. Fortunately, plain radiographs demonstrated specific findings compatible with C. lusitaniaeinfections, since the patient was admitted to our clinic about 45 days after the injury. Unlike the literature, however, the fluconazole treatment was recommended by the infectious diseases clinic for three weeks. During follow-up in the outpatient setting, no pain or discharge was observed, which underscores the use of adequate antibiotherapy in our case.

In conclusion, osteomyelitis should be considered in patients with splinter injuries suffering from persistent pain and discharge despite long-term antibiotic use. This case is the first report of osteomyelitis of the distal phalanx caused by C. lusitaniaein the literature, highlighting the importance of definitive diagnosis and pathogen-specific treatment, rather than empirical treatment, to achieve favorable results with cure.