Objectives: This study aims to explore the mechanism by which osteoblast autophagy participated in glucocorticoid-induced femoral head necrosis (FHN).

Conclusion: Osteoblast autophagy may play a crucial protective role in dexamethasone-induced FHN. The attenuation of autophagy may be related to the affected expressions of key autophagy regulators mTOR and Beclin-1.

Femoral head necrosis (FHN) is a pathological process typified by the death of bone active components.[1-3] With the aggravation of hormonal drug abuse, steroid-induced avascular necrosis of the femoral head (SANFH) has become a common bone and joint disease clinically, which usually endangers bilateral femoral heads with a wide range of osteonecrosis at the end stage. Because of the high disability rate after onset, most patients eventually choose hip replacement surgery.

In recent years, autophagy has been closely related to many aging and degenerative diseases, including aging-induced systemic bone loss. Autophagy is a self-eating behavior widely existing in cells, as an intracellular process transporting substances to lysosomes for degradation.[4] Like apoptosis and endoplasmic reticulum stress, autophagy is also a crucial physiological phenomenon in cells relying on a highly conserved autophagy process in each species to buffer the stress response of the external environment, to degrade harmful organelles, and to maintain normal metabolism and homeostasis of the internal environment.

Recently, the important roles of autophagy in human health and diseases have been highlighted, and the protective effects of autophagy under various stresses have been proven,[5] suggesting that the changes of autophagy activity dominate in the prevention and development of diseases. The influence of autophagy on bone metabolism is well documented. For instance, Liu et al.[6] found that autophagy was activated during the differentiation of osteoblasts. Besides, Zhang et al.[7] reported that the expressions of various autophagy-related genes were associated with bone density. However, they failed to determine whether autophagy exerted beneficial or adverse effects. Autophagy is of great significance to the maintenance of mature bone formation.[8] During aging, osteoblast function is weakened and bone loss is affected by the progressive damage to osteoblast autophagy.[9] In high glucose environments, autophagy is a crucial mechanism for osteoblast protection.[10] At present, autophagy is a well-established protective mechanism of cartilage itself. The autophagy level of chondrocytes gradually decreases along with aging, thus being one of the important reasons for articular cartilage degeneration.[11-14]

However, it remains controversial whether the autophagy level changes in the procession of hormone- induced FHN. Microtubule-associated protein 1 light chain 3 (LC3) is a key gene encoding autophagy- related proteins which are localized on the surfaces of pre-autophagic vesicles and autophagic vesicle membranes. It plays an essential role in the processing and modification of two ubiquitin-like proteins, and participates in autophagosome formation. Beclin-1 is a homologue of yeast autophagy-related 6 (Atg6) protein. Beclin-1 autophagy-related proteins are localized on the pre-autophagosome to bind phosphatidylinositol- 3-kinase (PI3K), forming a Beclin-1-Vps34-Vps15 core complex which plays a vital role in the early stage of autophagosome formation. Luo and Rubinsztein[15] reported that Beclin-1 overexpression in HeLa cells caused a continuous increase in the number of intracellular autophagosomes. Additionally, Qu et al.[16] found that Beclin-1-deficient mice underwent significantly reduced autophagic vacuole formation, suggesting that the regulation of Beclin-1 expression was consistent with autophagy. As a conserved serine/threonine protein kinase, mammalian target of rapamycin (mTOR) facilitates cell autophagy when its activity is inhibited, and suppresses autophagy when its activity is enhanced.[17] In this study, we aimed to explore the mechanism by which osteoblast autophagy participated in glucocorticoid-induced FHN.

The right femoral head was scanned with micro-computed tomography (CT) to observe its morphology. The sections were placed in a 55°C oven for 30 min, infiltrated in xylene for 10 min and refreshed xylene for another 10 min, rinsed three times with phosphate-buffered saline (PBS) (five min each time), hydrated with absolute ethanol and gradient concentrations of ethanol solutions rinsed three times with PBS (five min each time) and stained with hematoxylin for 10 min. After excess staining solution was washed off with clean water for 10 min, the sections were washed with distilled water for 10 sec, discolored and differentiated with 1% hydrochloric acid-ethanol for 5 sec, stained with eosin for about one min, rinsed three times with PBS (five min each time) and then dehydrated with gradient concentrations of ethanol solutions. After dehydration was completed, the sections were transparentized with xylene for five min and mounted with neutral resin to observe the morphology of the femoral head under an optical microscope. Five fields of view were selected under high magnification, and 50 bone lacunae were counted in each field to calculate the percentage of empty lacunae, which was used to indicate the overall apoptosis rate. Percentage of empty lacunae = number of empty lacunae/number of bone lacunae × 100%.

The relative growth rate of MC3T3-E1 cells was detected by CCK8 assay. After passage in α-MEM to the third generation, the cells were counted, diluted and seeded into a 96-well plate at a density of 5×104/well. After cell adherence, the culture medium was discarded. Then the cells were added α-MEM containing dexamethasone at 0 mM (control), 10-8 M, 10-6 M or 10-4 M, and incubated for 24 h. Afterwards, 10 μL of CCK8 solution was added to each well, and the plate was placed in an incubator at 37°C for another one h. The 96-well plate was taken out from the incubator, and the optical density (OD) was measured by a microplate reader at 450 nm to calculate the relative growth rate. Relative cell growth rate= (ODexperimental group - ODmedium)/(ODcontrol group - ODmedium).

MC3T3-E1 cells were lysed with 200 μL of pre- cooled RIPA lysis buffer, and centrifuged at 4°C and 12,000 rpm for five min to collect the supernatant. Total protein concentration was measured by the BCA method. Subsequently, proteins were separated by 5% SDS-PAGE, and the products were electronically transferred onto a PVDF membrane. The membrane was thereafter washed three times with Tris buffered saline with Tween 20 (TBST) (10 min each time), blocked in the blocking solution at room temperature for one h, incubated with primary antibodies against LC3B, mTOR and Beclin-1 (1:300 diluted) and β-actin (1:1,000 diluted) overnight at 4°C, washed, incubated with secondary antibodies against at room temperature in dark for 60 min, and washed by TBST. Afterwards, the membrane was developed by using ECL reagent, and the gray values of protein bands were analyzed by Image Lab (Image Lab LLC, Sarasota, FL, USA) software.

The CT scan showed that in the blank control group, the trabeculae of the femoral head were in good shape and evenly distributed, without the formation of subchondral necrosis zone (Figure 1a). In the dexamethasone group, the subchondral necrosis zone of the femoral head was formed, the trabeculae were occluded, and that in the medullary cavity was thin, sparse, fractured, and the cortical bone was thickened (Figure 1b). In the rapamycin-dexamethasone group, the CT imaging findings of the femoral head were between the dexamethasone group and the blank control group. The fracture and atrophy of the trabeculae in the medullary cavity and the partial necrosis of the subchondral bone were observed (Figure 1c). 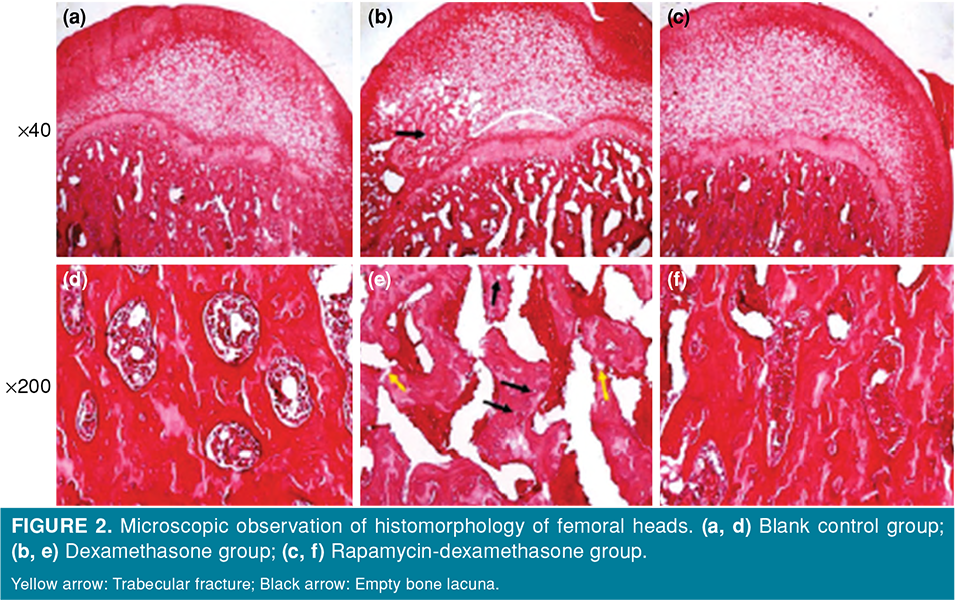 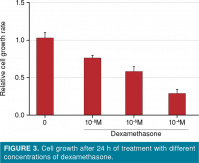 Figure 3. Cell growth after 24 h of treatment with different concentrations of dexamethasone.
× 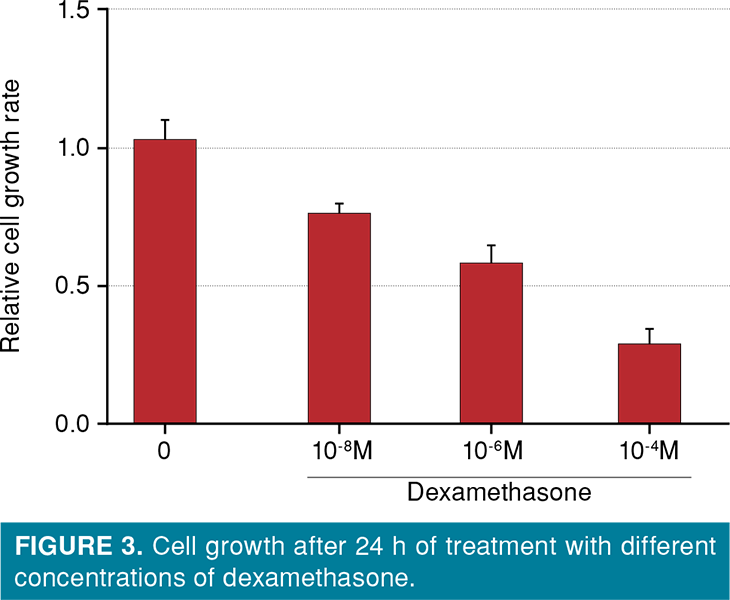 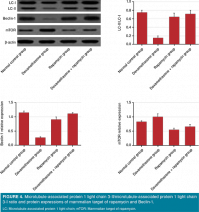 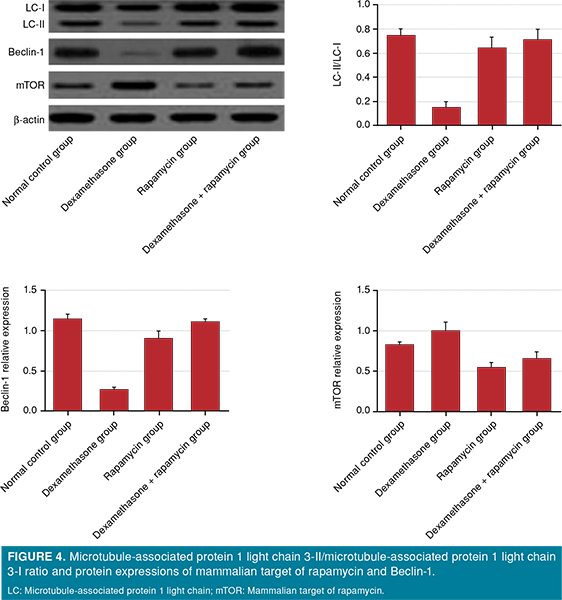 The pathogenesis of FHN is the interruption or damage of blood supply to the femoral head, leading to apoptosis of bone cells.[18] At present, there are many theories on the pathogenesis of hormonal FHN, such as osteoporosis, intraosseous hypertension, intravascular coagulation, osteotoxin effect, osteocyte apoptosis, and fat metabolism disorder,[1-3] but its exact pathogenesis remains unclear.

Autophagy is an important protective mechanism of cartilage itself, and the reduction of autophagy is considered to be one of the important causes of articular cartilage degeneration. Zhang et al.[19] found that mesenchymal stem cells can promote their survival by increasing the level of autophagy in hypoxia and serum-free conditions. Besides, Gao et al.[20] reported that autophagy also played a key protective role in the process of hormone- induced degeneration and apoptosis of bone cells by in vitro bone cell culture, and the number of bone cell death after autophagy significantly increased. In this study, a steroid-induced FHN model was established by intraperitoneal injection of 2.5 mg•kg-1 dexamethasone sodium phosphate. After the model was established, the femoral head tissue obtained was stained with HE, and the morphology of the femoral head was observed under a microscope. The results showed that under the intervention of dexamethasone, the adipocytes in femoral head of the mice increased, the lipid deposited in the bone cells, the trabeculae of the femoral head were sparse and disordered, and the number of empty bone lacunae increased in the dexamethasone group, which was more than that of the blank control group and the dexamethasone and rapamycin group. According to the results of micro- CT, in the mouse hormone FHN model constructed by dexamethasone alone, subchondral necrosis zone of femoral head was formed, trabeculae were occluded, trabeculae in medullary cavity became thin, sparse and fractured in the medullary cavity, and thickened bone cortex appeared. However, after intraperitoneal injection of rapamycin, the femoral head was in good shape, some trabeculae were fractured and atrophied, and the subchondral necrosis zone was significantly less than that of the dexamethasone-constructed hormonal FHN mice.

Moreover, Liao et al.[22] reported that compared with the control group, the LC3-II/LC3-I ratio of dexamethasone group gradually decreased from 12 h (p<0.01) to 24 h (p<0.05), reaching the minimum at 48 h. They verified that autophagy was inhibited by dexamethasone treatment time-dependently. Furthermore, Luo et al.[23] reviewed the role of autophagy in steroid-induced FHN. They concluded that autophagy was a self-protection mechanism for FHN, and autophagy and apoptosis participated in the pathogenesis of steroid-induced FHN, with the level of autophagy associated with the dose of hormone.

The LC3 is a recognized autophagy marker. When autophagy is formed, cytosolic LC3 (i.e. LC3-I) can hydrolyze a small segment of polypeptide and transform into an autophagosome model (i.e. LC3-II). The LC3-II/LC3-I ratio can be used to estimate the level of autophagy.[24] The mTOR complex and Beclin-1 complex are key molecules regulating autophagy in cells, which play a crucial role in the development of autophagy.[25,26] It is generally accepted that mTOR plays a regulatory role in autophagy through two mechanisms: (i) mTOR-mediated signal transduction acts on downstream effectors, such as transcription initiation factor 4E binding protein 1 and ribosomal protein S6 kinase, and initiates related gene transcription and translation to control autophagy; (ii) mTOR kinase acts directly on Atg protein to regulate autophagosome formation.[27,28] Autophagy is promoted when mTOR activity is inhibited, and suppressed when mTOR activity is increased. Beclin-1, also known as BECN1, is a homolog of the yeast autophagy protein 6 (ATG6) gene and a specific gene of mammals involved in autophagy. Beclin-1 gene regulates the localization of other Atg proteins in the structure of autophagy precursor and regulates autophagy activity by forming complex with type III PI3K.[29,30] It is well established that up-regulation of Beclin-1 expression in mammalian cells can stimulate the occurrence of autophagy, but it cannot happen after knockings out this gene.[25,28]

Rapamycin used in this study is a classical autophagy enhancer, and the regulation pathway of autophagy mainly involves the classical PI3K/protein kinase B/rapamycin target protein signaling pathway. However, rapamycin can induce and promote autophagy by inhibiting mTOR, and the influence of many factors on autophagy is related to the change of mTOR activity.[31,32] Herein, after rapamycin enhanced autophagy level, the apoptosis level and cell growth inhibition rate decreased significantly. It indicates that autophagy can inhibit the death of MC3T3-E1 cells stimulated by dexamethasone to a certain extent, and autophagy plays a protective role on osteoblasts (MC3T3-E1), which will provide a new idea for the treatment of hormonal FHN.

The number of used animals is limited. Besides, the findings must be further verified by clinical studies.