Is the cross-finger flap a good option at the extensor zone defect?

Objectives: This study aims to evaluate the surgical and clinical outcomes of reversed cross-finger subcutaneous flaps applied to patients with dorsal digital defects.

Patients and methods: Between January 2015 and September 2018, 25 (22 males, 3 females; mean age 35.6±11.6 years; range, 19 to 65 years) out of 27 patients under prospective follow-up with finger dorsal digital defect were retrospectively screened and included in the study. The data, obtained by the same two surgeons at six months postoperatively in patients who had undergone reversed cross-finger subcutaneous flaps surgery, concerned cold intolerance, a static two-point separation test, and functional results using range of motion (ROM) and Quick Disabilities of the Arm, Shoulder and Hand (DASH) scoring.

Results: The majority of the patients presented with occupational injury (64%), most commonly to the dominant hand (76%) and the fourth finger (36%) most frequently. Seven patients with extensor tendon defects underwent reconstruction with a palmaris longus autograft. At the six-week postoperative follow-up, all flaps were live, the donor site had no morbidity, and no additional intervention was performed. There was no statistically significant difference in finger joint ROM (p>0.05). Cold intolerance was observed in 14 patients (56%). The mean dynamic two-point distinction was 6.0±0.7 mm and the QuickDASH score was 22.3±5.0.

Conclusion: Due to reasons such as minimal donor site morbidity, satisfactory functional finger outcomes, and easy applicability, reversed cross-finger subcutaneous flap is a good option for reconstruction of defects in the dorsal aspect of the finger with or without extensor mechanism defects.

Reconstructions of dorsal digital finger injuries with or without tendon defect often cause serious difficulties for surgeons as they also affect the extensor mechanism. Although local, regional, or free flaps may be used in the reconstruction of these defects, the results may not always be satisfactory. Various flaps have been described in the literature that can be used in such injuries.[1-5] Although various flaps have been defined for adequate coverage of dorsal finger defects, these flaps may not result in cosmetic and functional satisfaction due to volume mismatch.[6] In order to minimize the problems of the donor finger, the opposite cross finger is defined as the second, third, fourth, and fifth fingers. It is a good alternative to close defects on the side of the middle and distal phalanx. This method, which is not difficult for the surgeon, may be our first choice to treat such defects [1,7,8] Therefore, in this study, we aimed to evaluate the surgical and clinical outcomes of reversed cross- finger subcutaneous flaps applied to patients with dorsal digital defects.

This cross-sectional prospective study was conducted at Kayseri Training and Research Hospital and Kayseri City Training and Research Hospital between January 2015 and September 2018. Twenty-seven patients who were admitted to the emergency department with a dorsal finger defect with or without extensor mechanism injury were included in the study. Two patients who did not attend during the follow-up period were excluded. Finally, 25 patients (22 males, 3 females; mean age 35.6±11.6 years; range, 19 to 65 years) were included. The Atasoy technique was applied in all cases.[9] The anesthesia method to be administered was decided by the anesthesiologist. The study protocol was approved by the Erciyes University Clinical Research Ethics Committee (numbered 2019/272). A written informed consent was obtained from each patient. The study was conducted in accordance with the principles of the Declaration of Helsinki.

The patients were evaluated and their age, gender, type of injury, type of anesthesia, location of the defect, skin graft localization, complications, and time to return to work were recorded. At six months postoperatively, Turkish version of the Quick Disabilities of the Arm, Shoulder and Hand (DASH) assessment form was applied and joint range of motion (ROM), cold intolerance, a static two-point separation test for flap sensory examination, and functionality measurements were compared to the opposite side finger of the patients.

Peripheral regional anesthesia and arm tourniquet were used, depending on the patient’s condition and the opinion of the anesthesiologist. After routine preparation and draping of the upper extremity, a properly located, sized, and designed flap was marked. The schematic drawing of the surgical technique including flap design and application was presented (Figure 1). 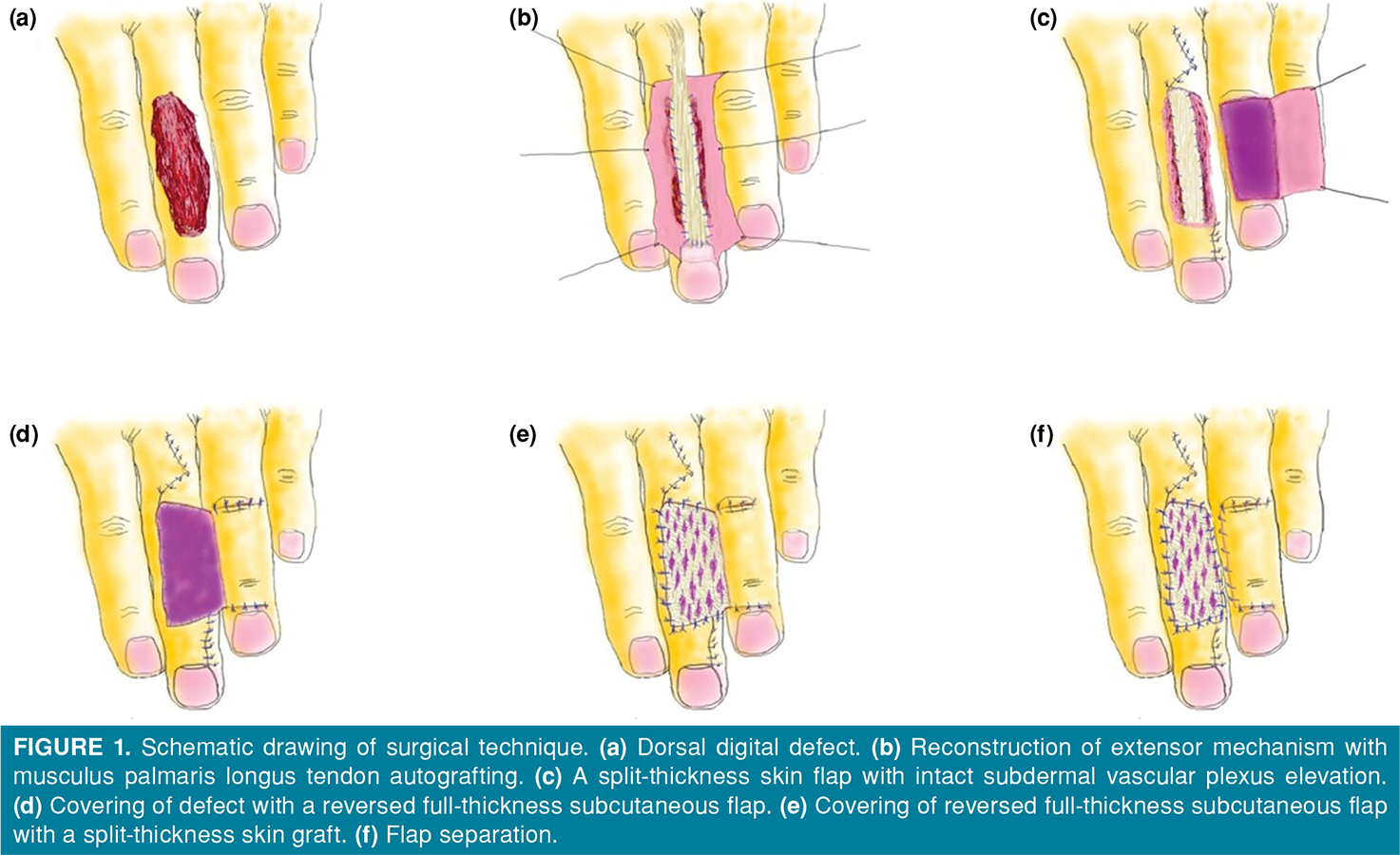 This was usually obliquely located at the dorsum of the middle phalanx about 1 cm longer and about 4 to 5 mm wider than the defect. Local debridement was performed on the injured finger (Figure 2a). Then, if the extensor mechanism was involved in the injury, reconstruction of the extensor mechanism with musculus palmaris longus tendon autografting was performed (Figure 2b). Under loupe magnification, a split-thickness skin flap with intact subdermal vascular plexus was elevated based on the opposite side of the uninjured finger (Figure 2c). After full-thickness skin flap elevation on the donor finger, a full-thickness subcutaneous flap under the skin flap was elevated (Figure 2d). Next, the recipient defect was covered with a reversed full- thickness subcutaneous flap (Figure 2e). After reversing the subcutaneous flap with this intact oblique skin island, the skin island was sutured back onto the donor finger. The flap was elevated at the level of the extensor paratenon and the dorsal veins and blood supply were preserved in the flap. After good hemostasis was obtained, the reverse surface of the thin subcutaneous flap on the injured finger was covered with a split-thickness skin graft without a tie-over dressing (Figure 2f). The dressing and sutures were removed in about two weeks (Figures 2g and 2h) and the flap between the fingers was divided under local anesthesia in about three weeks (Figure 2i). 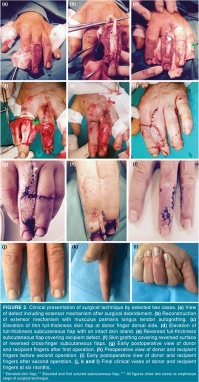 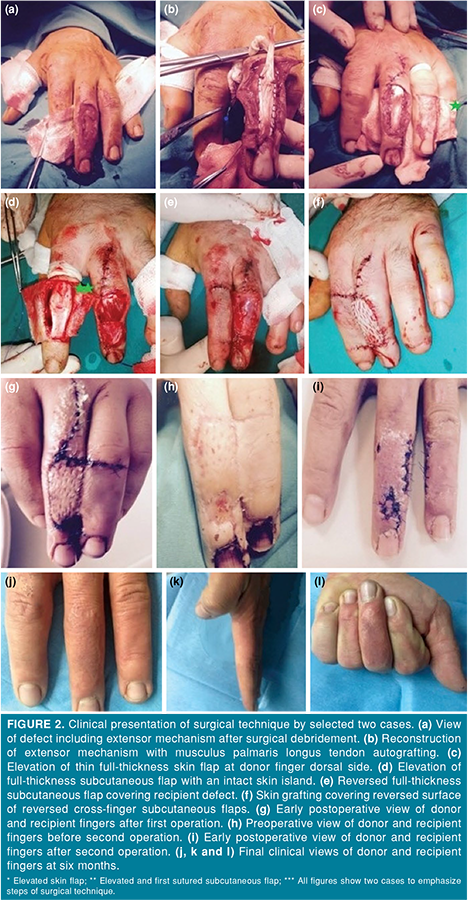 Statistical evaluations of the data were performed with the IBM SPSS version 22.0 software (IBM Corp., Armonk, NY, USA). The frequency and percentages were given in the evaluation of the data and the relationship analyses were performed using Pearson’s chi-square (χ2) test. The level of statistical significance was set at a two-sided p value of 0.05.

Sixteen of the 25 patients (64%) had been involved in industrial accidents and seven (28%) in accidents at home, while two (8%) were operated on due to traffic accidents (Table I). The mean duration of return to work was 50.6±5.6 days (Table II).

Fourteen patients (56%) with extensor tendon injuries were treated with primary repair and seven patients (28%) with the tendon defect were reconstructed with a palmaris longus autograft. Four patients (16%) underwent flap treatment without any additional intervention due to a partial defect without functional loss. At the donor site, mostly the skin graft was harvested from the proximal medial face of the arm (15 patients, 60%) (Table I).

At the six-week postoperative follow-up, all flaps were alive, the donor site had no morbidity, and no additional intervention was performed.

Table 3. Comparison of range of motion of operated finger joint to that of non-operated joint of same finger
×

There were no complications which necessitated a tertiary operation in any case such as partial or total necrosis, early/late or superficial/deep infections.

Reversed cross-finger subcutaneous flaps in dorsal digital defects of the finger were easier to apply than many defined complicated methods, and the clinical outcomes were satisfactory and cost-effective in our study.[10]

Although there are many options for treatment, the basic principle is to maintain finger length, provide a sensory skin cover, and functional improvement as much as possible.[11]

Treatment options vary depending on many factors. Whether the bone is exposed is one of the most important criteria. If the bone is not exposed, primary suture, split-thickness skin graft, or secondary healing may be used. If the bone is exposed, shortened primary, local, or pedicled flaps or free tissue transfers can be used.[11] It is possible to repair dorsal defects with a homodigital subcutaneous flap,[11] proximal- based axial digital artery transposition flap,[12] reverse- flow digital artery flap,[13] and reversed cross-finger subcutaneous flaps.[7,8,14]

Atasoy[3] reported four patients with nail bed defect treated by axial pattern adipofascial flap after the reversed dermis flap described by Pakiam.[2] Voche and Merle[15] described the homodigital subcutaneous flap with axial pattern for the treatment of dorsal finger defects. The most important disadvantages of this application are the fact that the pedicle is distorted after transposition of the flap on the defect and it can cover only two-third of the defect. The axial- patterned adipofascial cross-finger flap described by El-Khatib[16] has the disadvantages of long dissection time and sacrifice of the digital artery. Al-Qattan[14] has modified the existing technique by turning the flap proximally from the same finger.

The reversed cross-finger subcutaneous flaps can be used to treat small to medium-sized dorsal or palmar complicated finger defects at any level. Flap dissection is simple and single level. There are no functional or cosmetic sequelae at the donor site.[17] The application is simple, and the rate of complication development is low.[17] It is highly reliable because it is fed directly from the dorsal segmental branches of the radial or ulnar side of the digital artery.[18] Moreover, the continuity of the digital artery is preserved.

The main disadvantage of the reversed cross- finger subcutaneous flaps is that they require two sessions. At 10 to 14 days postoperatively, surgery for separation should be performed. Thus, joint stiffness, which is an important complication, will not be encountered.[19] In our cases, we aimed to separate the flap during this period and to prevent adhesion of the extensor tendon and contraction of the skin graft. At the last follow-up in all cases, the ROM values of the donor and recipient fingers were within normal limits.

Orhun et al.[11] reported cold intolerance in 76.3% of cases. Nishikawa and Smith[21] reported that 53% of their patients had cold intolerance and that almost full sensation was achieved in all patients that underwent a sensory examination. In our study, this rate was 56% and it is compatible with the literature. The results of the QuickDASH scoring were also satisfactory.

Unable to standardize etiological factors is the most important limitation of this study. Another limitation is that the traumatic hand and the dominant hand are not the same sides.

In conclusion, the reversed cross-finger subcutaneous flap is a good option that is satisfactory for the patient and the surgeon to close defects in the dorsal aspect of the finger for various reasons, such as minimal donor site deformity, flexibility, simplicity, ultimately a functional finger, and shorter application time.